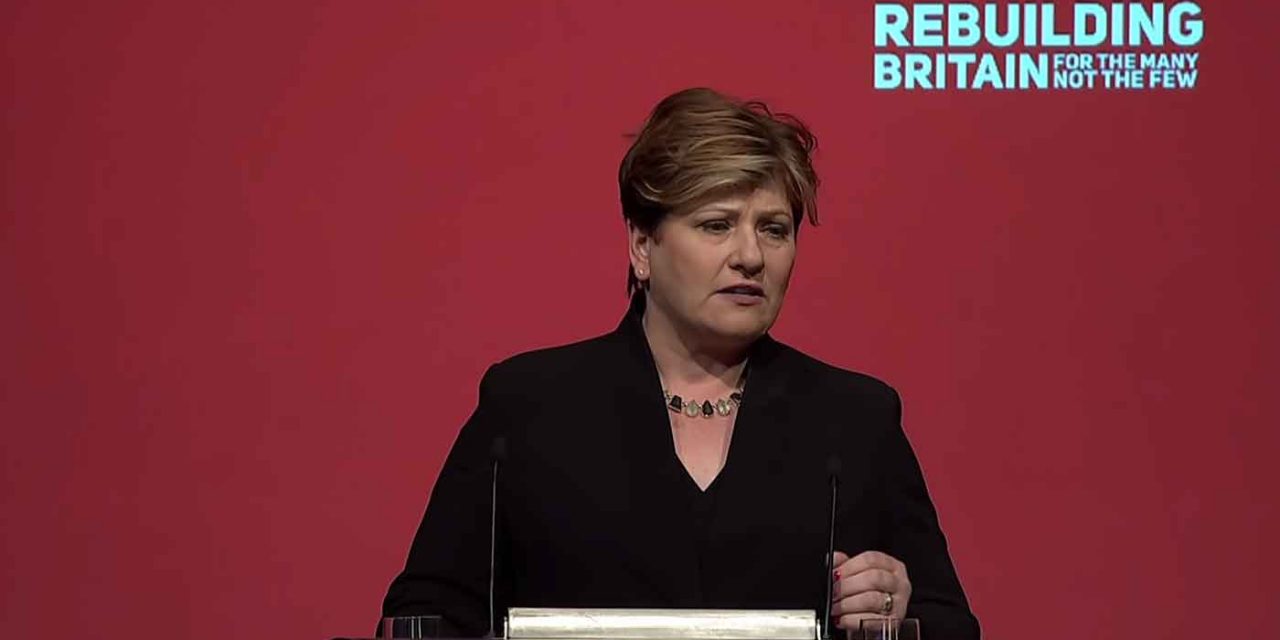 Emily Thornberry had strong words for Israel’s government and Labour’s anti-Semites at the Labour party conference, but instead of owning up to the fact that mainline party leaders espouse anti-Semitic views, she instead tried to claim these views were only held by individuals on the “fringes” of the party.

Like many politicians, Thornberry used strong words and emotive language, passionately saying, “Let me speak to you from the depths of my heart and my soul and say something I never thought I’d have to say in my lifetime as a Labour member and activist, and it is simply this: that if we want to root out fascism and racism and hatred from our world, and from our country, then we must start, we must start, with rooting it out of our own party.”

However, instead of admitting that the anti-Semitism scandal is widespread within the party she insisted it was only on the fringes.

Thornberry said, “I know as well – and we must all acknowledge – that there are sickening individuals on the fringes of our movement, who use our legitimate support for Palestine as a cloak and a cover for their despicable hatred of Jewish people, and their desire to see Israel destroyed.”

She then declared that these people “stand for everything that we’ve always turned against and they must be kicked out of the party” just as they kicked out the fascist Oswald Mosely.

The problem with this statement is that those espousing anti-Semitic views are not on the “fringes” of Labour and very few of them have been “kicked out”.

Ken Livingstone made anti-Semitic comments about Zionists supporting Hitler. He was Mayor of London, a highly influential figure within the party and remains a key ally of Labour leader Jeremy Corbyn. He eventually resigned from the party after Labour failed to deal with him for two years, but he only did this to protect Corbyn, he still proclaims his innocence. He was not on the “fringes” of Labour.

Naz Shah, who tweeted anti-Semitic comments (as well as showing an ongoing hatred of Israel), is still a member of parliament under Labour. She is also not on the “fringes” of Labour.

And Jeremy Corbyn himself rejects Israel as a Jewish state and made an anti-Semitic comment about “Zionists”, which was his code word for “Jews”, and his comments of their lack of understanding English irony, suggesting that they were not truly British which is a racist trope. Corbyn also questioned Israel’s right to exist and has said a number of other anti-Semitic comments against both Israel and Zionism. Jeremy Corbyn, the leader of the party, is not on the “fringes” of Labour.

These are just three examples of people who are not on the fringes who made anti-Semitic comments and whom Labour did not kick out.

Like many in Labour’s leadership, Thornberry is failing to understand the anti-Semitism in her own party as well as who it is emanating from. So no matter how strong her words are, she and Labour are not going to resolve this issue.

Moreso than that, Emily Thornberry herself espoused anti-Israel views which could be construed as being anti-Semitic when she said the following:

The “Netanyahu government” (which is the phrase Ms Thornberry uses when referring to Israel, so as to avoid being seen as anti-Israel) is the elected government of the Israeli people and does not have “racist policies”.

Israel’s Nation-State Law, which Thornberry is accusing of being racist, is a “decorative law” that simply acts as an affirmation that the state of Israel is the world’s only Jewish state embodies the Biblical truth that we Christian Zionists believe about Israel.

The most shocking part of all of this is that Emily Thornberry, along with other anti-Israel activists, only singles out the Israeli government’s policies as being “racist”. They do not accuse the Palestinian Authority of being racist, even though it does not allow the sale of land to Jews and declares that “Palestine” will be free from all Israelis. Thornberry does not call any Islamic country “racist” even though they have Islamic laws that discriminate against other religious groups.

May we remind you that holding Israel to a higher standard than all other countries is, according to the IHRA definition, anti-Semitic. And if that is what Emily Thornberry is doing, well, she is also not on the “fringes” of the party.