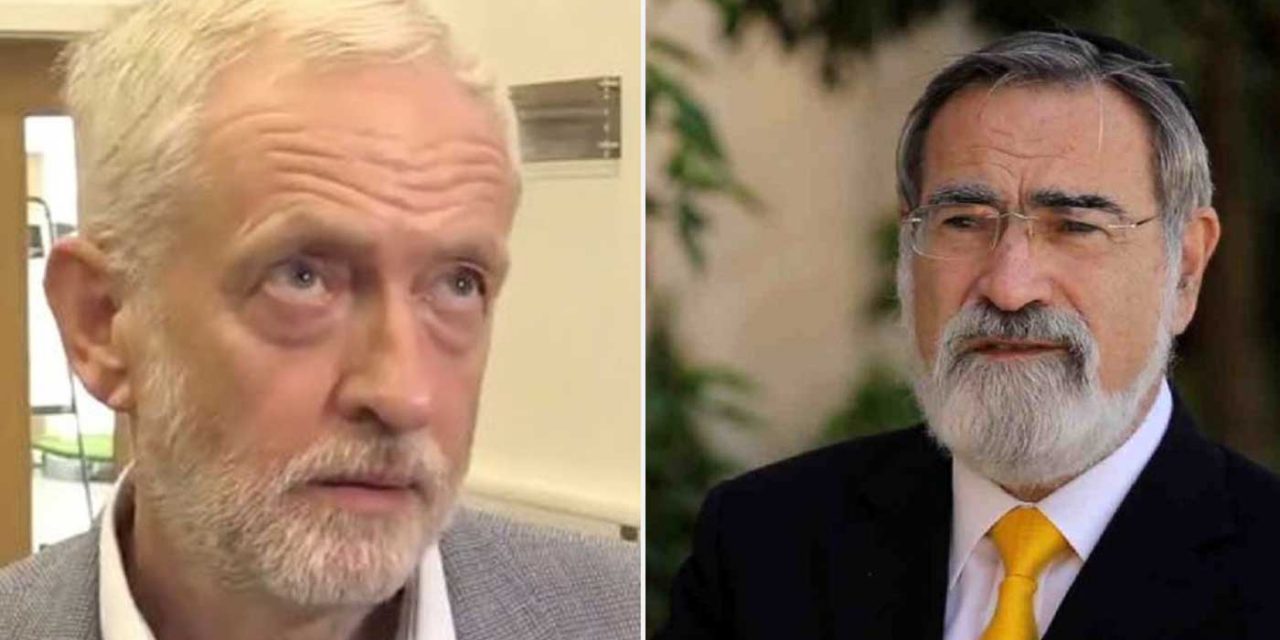 This week Rabbi Lord Sacks gave his opinion on Jeremy Corbyn and the anti-Semitism scandal of the Labour party.

Unfortunately, instead of reflecting on Rabbi Lord Sack’s comments, Labour has come out on the offensive. They called his words “absurd” and “offensive” and have shown yet again that they do not understand their own anti-Semitism or how to deal with it.

A Labour spokesperson rejected the rabbi’s comments saying in a statement that the “comparison with the race-baiting Enoch Powell is absurd and offensive.”

The spoksperson then made the claim that “Jeremy Corbyn described a particular group of pro-Israel activists as Zionists, in the accurate political sense, not as a synonym or code for Jewish people.”

The spokesperson added: “Jeremy Corbyn is determined to tackle anti-Semitism both within the Labour Party and in wider society and the Labour Party is committed to rebuilding trust with the Jewish community.”

We hear time and time again that Corbyn is “committed” or “determined” to “tackle” anti-Semitism. However, when one of the most influential people in the British Jewish community writes you a letter, speaking on behalf of many Jewish people, the Labour response is to reject, dismiss and attack.

Bashing Jewish leaders is not how you “tackle” anti-Semitism

By dismissing Rabbi Lord Sacks’s comments in this way only drives a wedge between Labour and the Jewish community. And the point Rabbi Lord Sacks made when he said that Corbyn leads and others follow came true yet again with this incident.

Labour’s response has given fuel to the fire of the anti-Semites who, instead of finding a solution to the problem, they are trying to discredit Rabbi Lord Sacks, a feat they have failed to do. This is an attempted character assassination of one of the Jewish communities greatest living minds, and perhaps, one of the world’s greatest minds and is fuelled by the Labour leadership. Rabbi Lord Sacks has also been subjected to a torrent of anti-Semitic abuse online.

Surprisingly, anti-Semites on the far right of politics are also coming to Corbyn’s defense in the form of David Duke, the former grand wizard of the Klu Klux Klan (KKK), and Nick Griffin, the former leader of the British National Party (BNP).

“Go Jezza! I wonder how many Labour activists the hysterical #Zionist media campaign against Corbyn is re-pilling [sic]?” tweeted Griffin.

It shows that the far-right and far-left anti-Semites are united in their hatred of Israel, which is not surprising.

Corbyn’s response is no better than Labour’s

Corbyn’s statement on the issue was as follows:

“I described those pro-Israel activists as Zionists, in the accurate political sense and not as a euphemism for Jewish people – and that is made clear in the rest of my speech that day.

“I am now more careful with how I might use the term ‘Zionist’ because a once self-identifying political term has been increasingly hijacked by anti-Semites as code for Jews.”

Richard Millett, who was at the event during Hassassian’s speech and is one of the people Mr Corbyn was referring to, said the Labour leader’s comments were racist and “deeply antisemitic”, calling for him to apologise.

The blogger said suggesting he did not understand English irony “implies that I’m not from here, not from the United Kingdom. To highlight that, I find very offensive. It was unnecessary to do it, and racist.”

Where is the apology?

One thing you’ll notice in Corbyn’s statement as well as Labour’s is that there is no apology to the Jewish community.

He could have quite simply said, “I’m sorry if this comment caused any harm”, or “I apologise to the Jewish people I offended”.