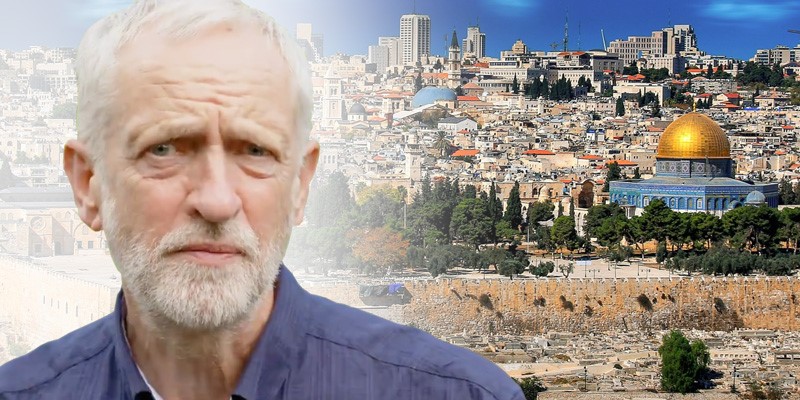 Labour leader Jeremy Corbyn has announced that he is willing to accept all the remaining points of the International definition on anti-Semitism… except for half of one point. Corbyn rejects that it is anti-Semitic to say that “the existence of a State of Israel is a racist endeavour” and by doing this, he is showing his rejection of Israel as a Jewish state.

It is important to point out that Jeremy Corbyn is likely to avoid spouting blatant anti-Semitism. He is diplomatic, careful with his words and intelligent. However, sometimes he reveals his convictions without necessarily realising he has done it or maybe he clearly states his views but does so in a way that deceives many people from understanding what he is really saying.

In his letter addressing Labour’s adopting of the IHRA definition on anti-Semitism, Corbyn addresses both Zionism and Israel but appears to contradict himself when equating them with racism.

First, he correctly addresses how Zionism is NOT racism, stating that, “In the 1970s some on the left mistakenly argued that ‘Zionism is racism’. That was wrong…”

Corbyn is right here. You can quite easily argue that some Zionists could also be racists. There are millions of Zionists with many different ideologies and viewpoints, some will have racist opinions and some of those will wrongly use Zionism in an attempt to justify their racism. However, we know as well as Corbyn does that Zionism itself is not racism.

Later on, however, Corbyn goes on to explain the piece of wording that he will not accept, arguing that, “Our actual differences are in fact very small – they really amount to half of one example out of 11, touching on free speech in relation to Israel.”

Corbyn singles out Israel as the only “racist” state

The definition that Corbyn rejects is the part that says it is anti-Semitic to claim “that the existence of a State of Israel is a racist endeavour” because the IHRA definition says to claim this is “Denying the Jewish people their right to self-determination”. Corbyn rejects this.

Corbyn argues his point saying, “It is unfortunately the case that this particular example, dealing with Israel and racism, has sometimes been used by those wanting to restrict criticism of Israel that is not antisemitic.”

The Board of Deputies of British Jews addressed this point when they responded to Corbyn’s article by stating that the IHRA definition does, in fact, allow for legitimate criticism of Israel as long as that criticism is “similar to that levelled against any other country”.

This means that someone can disagree with a policy of the Israeli government or the actions of Israel and not be anti-Semitic. We know that some wrongly accuse the policies of the Israeli government to be racist. However, this argument can be levelled at any government in the world, and if we were to honestly look at Israel compared with other countries, Israel would not even be in the top 50 countries to look at for institutionalised racism. There are even policies in the UK which some see as racist. However, we don’t label the UK government as being racist or that “the existence of Great Britain is a racist endeavour”.

Corbyn only accepts “Israel” if it has a Palestinian majority

Corbyn appears to contradict himself further when he talks about a “two-state solution”. Corbyn says in his letter, “Labour supports a two-state solution to the Israel-Palestine conflict. That means an end to the occupation of the Palestinian territories and the creation of a Palestinian state, alongside the state of Israel, with both states living in peace and security.”

However, if Corbyn is claiming that the “existence of the State of Israel is a racist endeavour”, whilst advocating for “a Palestinian state, alongside the state of Israel”, it raises concerns for Corbyn’s understanding of “Israel”.

Is Corbyn saying that he accepts Israel as a Jewish state? No. He says that’s “racist”.

We do know from previous comments of Corbyn that he supports the “right of return for the Palestinian people”, not to Gaza or the so-called West Bank, but to Israel. He has expressed support for this many times and if this were to happen it would, in fact, make Jews a minority in their own land and render Israel a Palestinian state in all but name.

Corbyn ultimately opposes the existence of a Jewish state

It would appear that Corbyn is happy for “Israel” to exist, but only with a Palestinian majority and a Jewish minority.

It is important to remember that Jeremy Corbyn is, at his core, an anti-Israel activist. He has expressed his opposition to Israel and his support for the Palestinian people throughout his political career. He has railed against the creation of Israel and even called Britain’s involvement through the Balfour Declaration a “historic mistake”. As patron of the Palestine Solidarity Campaign, the “Palestinian cause” is very close to his heart and he will never back down from this stance. Corbyn is free to hold these views, of course, but we must not be fooled into thinking that any definition adopted by Labour will change the current direction the party is going with Jeremy Corbyn at the helm.

Corbyn could have avoided this controversy months ago by simply adopting the IHRA definition of anti-Semitism with all its definitions. It would not have changed his ability to criticise Israel and it would have placed him in a more favourable light within the Jewish community, but he didn’t.

Corbyn’s rejection of this final “half of one example” in the IHRA definition of anti-Semitism serves only to highlight that he cannot bring himself to accept that Israel was and is the homeland for the Jewish people. And let’s be clear; Corbyn’s acceptance of the full IHRA definition would not mean he is accepting Israel as a Jewish state. His rejection of this point, however, does highlight his opposition to it.

Further insult to British Jews in handling this matter

To add insult to injury, the timing of Corbyn’s response to the Jewish community was mistimed to say the least. If his letter was truly meant for Jews, then it is baffling as to why it was published on Friday evening, just moments before Jews observe Shabbat – a time when many in the Jewish community are preparing for their day of rest, free from using electronic devices and switching off from work and politics until late Saturday evening or Sunday morning.

Surely by the time the Jewish community has picked up on the letter and thought how to respond, opinions from non-Jews would already be spread throughout the internet without Jewish voices being part of it. Jews would then be having to catch up with what is going on rather than being at the forefront of the conversation.

Some have tried to overlook this or make out it is not a big deal, but to many Jews it is very significant that the person who is trying to mend the rift with them chose such an inappropriate time to do it.

However, the content of Corbyn’s letter shows that despite his best efforts, his hatred of Israel as a Jewish state is shining through.