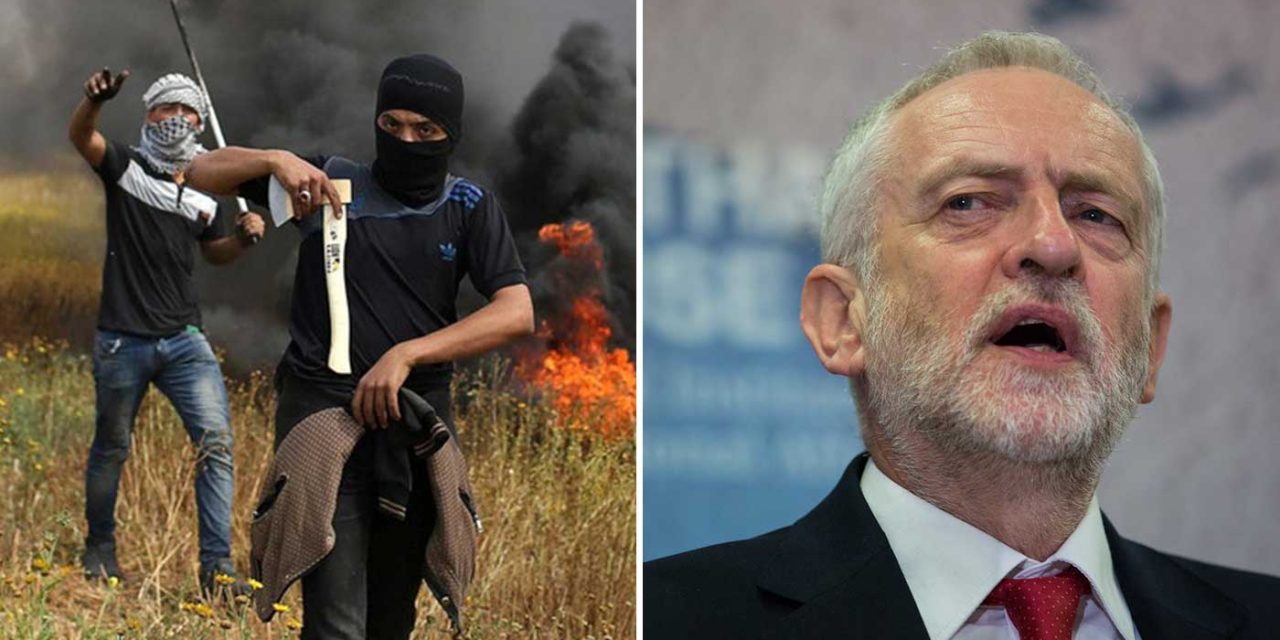 Labour leader Jeremy Corbyn has once again shown his hostility towards Israel and his willingness to defend his “friends” in Hamas when on Saturday he issued a one-sided statement on the Gazan protests.

“The killing and wounding of yet more unarmed Palestinian protesters yesterday by Israeli forces in Gaza is an outrage” his statement read.

He went on to say that Israel’s actions are “illegal and inhumane and cannot be tolerated”.

Far from being simply “protesters”, as Corbyn claims, as of last Thursday, 16 of the 19 people who had been shot dead by Israel were members of terrorist organisations. Not just members, but active militants within terrorist groups.

This is what Hamas is trying to achieve under the guise of “peaceful protests” pic.twitter.com/ZcuK6BJ91E

Most of the terrorists killed were shot dead whilst carrying out acts of terrorism against Israel. They were armed, not “unarmed” as Corbyn claims, but holding (and even firing) guns, planting explosives or carrying out violent attacks against Israel’s border or security forces.

And while the other three people killed were not directly linked to terrorist organisations, there are questions as to whom they are affiliated to as they are all men of fighting age who died alongside these other terrorists.

The Hamas propaganda machine pumped out messages, saying that Mahmad Nasim Abu Amryu was “an artist who draws using sand”. This is what they told the Western media. But they didn’t tell us that this “artist” was an active member of the al-Qassam brigades and is pictured in full military getup holding what looks like an M16 assault rifle.

In fact, all sixteen of the men linked with terrorist groups are pictured holding guns and posing in military gear. All of them received military funerals and all of their families are going to be paid from the Hamas martyr’s fund. In fact, 80% of those wounded have an affiliation with terror groups.

We do not have the full details of all of those killed last Friday. However, we do know that a number of them were carrying out terrorist attacks when they were killed. One of the terrorists that Corbyn defends was shot dead by an Israeli drone as he approached the border fence. Video footage on Friday showed him walking to the border holding a weapon.

When his body was recovered, not by Israel, but by Palestinian medics, they were the ones to point out that he possessed a gun, a knife and some grenades. Again, that is what the Palestinians said, not Israel.

The killing and wounding of yet more unarmed Palestinian protesters yesterday by Israeli forces in Gaza is an outrage.

I have asked for this statement to be read at today's demonstration supporting the Palestinian people in Gaza: https://t.co/KzxZU83cIg

Let’s be clear, this was not a peaceful protest and Corbyn’s support of Hamas’s narrative should be deeply troubling. Corbyn has lambasted Israel time and time again over the years whilst ignoring the real perpetrators responsible for the plight of the Palestinians; the leaders of Hamas and the Palestinian Authority.

His statement continues to speak of Gazan’s lack of “basic human and political rights”, which has an element of truth, except not because of Israel. Hamas was elected over a decade ago and has been unwilling to hold further elections. It is not Israel’s fault that Hamas terrorists now control Gaza with an iron fist.

Corbyn states that “more than two thirds” of Gazans “are reliant on humanitarian assistance, with limited access to the most basic amenities, such as water and electricity.” But the blame should not be placed on Israel.

In terms of the electricity, the problem rests between Hamas and the Palestinian Authority. Whilst Israel supplies the power, it is the PA who pays the bill, who collect the funds from Hamas. When Hamas and the PA have a dispute and the PA refuse to pay Hamas’s bill, or Hamas is unable to pay, Gaza suffers power outages or a hospital closure, and Israel gets the blame.

The same happens with water. However, Israel is now building an electricity and water treatment plant in Gaza in order to help them alleviate this problem and help the people of Gaza, something Hamas has failed to do for the past ten years.

And let’s not forget that Hamas is mismanaging its funding on an immense scale. Each terror tunnel they build, of which they have built hundreds of miles worth, estimates to be $1 million per tunnel. Hamas builds luxury shopping malls and apartments for Hamas members while failing to build a single home for its impoverished residents. And Hamas even spent $10 million just to put this “protest” together on Israel’s border.

What’s even more absurd is that after Friday’s protests, where protesters burned 10,000 tyres at the command of Hamas, the Gaza strip is now suffering from a shortage of tyres. This is not a joke. Palestinian leaders now have the audacity to blame Israel for restricting the import of tyres and causing “hardships” for Palestinians” rather than admitting that they carelessly burnt their tyres.

Corbyn also calls for the “right of return” for the Palestinians in Gaza after labelling the majority of Gaza’s residents as being “stateless refugees”. In 2005, Israel withdrew from the Gaza strip. They exchanged land for peace and in return were hit by thousands of rockets fired from Gaza into Israel.

Gaza is currently an area free from Jews. The thought was that if Israel left Gaza the Palestinians living there would make a life for themselves on the land and live peacefully as Israel’s neighbours in their own state. Unfortunately, this was not the case. Now Gaza is already “cleansed” of its Jewish population, they now appear to want to do the same with Israel.

Corbyn’s endorsement of this “right of return” is again shocking. If Palestinians who are now no longer “stateless” have a claim to return to their ancestral homes, does that mean the Israeli Jews who were forcefully uprooted from Gaza will also have a “right of return”? Can the 800,000 Jews who were driven out of Muslim nations after the creation of Israel now return to their homes in those nations, or is the “right of return” only available to Palestinians as a political weapon wielded against Israel in order to rid the world of its only Jewish state?

Finally, Jeremy Corbyn called for a “review” of arms sales to Israel. This is actually a toned down version of Corbyn’s real stance on this issue. Corbyn has long supported the Boycott, Divestment and Sanctions (BDS) movement, which calls for a complete boycott of Israeli goods. However, he has also called for ALL trade, not just arms, to be cut between Israel and the West.

At an anti-Israel demonstration in London in 2012, Corbyn passionately declared to a cheering crowd, “Now! The West, cut the trade with Israel; suspend the EU-Israel trade agreement; cut the arms sales; support the people of Palestine”.

Jeremy Corbyn’s latest statement has shown his true colours regarding Israel. He is unable to see the truth regarding the Israel-Palestinian conflict and willingly takes the side of the terrorists in order to demonise Israel.

Israel is defending its border from Palestinian terrorists. The protests are just a “smokescreen” to distract Israeli forces while the terrorists carry out their attacks.

Corbyn is wrong to condemn Israel and let off Hamas. His statement should trouble all of us that love Israel.

The full statement from Jeremy Corbyn for 7 April 2018 is as follows:

“I have asked for this statement to be read at today’s demonstration supporting the Palestinian people in Gaza:

The majority of the people of the Gaza Strip are stateless refugees, subject to a decade-long blockade and the denial of basic human and political rights. More than two-thirds are reliant on humanitarian assistance, with limited access to the most basic amenities, such as water and electricity.

They have a right to protest against their appalling conditions and the continuing blockade and occupation of Palestinian land, and in support of their right to return to their homes and their right to self-determination.

Firing live ammunition into crowds of unarmed civilians is illegal and inhumane and cannot be tolerated.

Under the cover of the riots in Gaza, Hamas operatives have been attempting to cut, burn, and shoot their way through the border fence in order to infiltrate Israel. By defending the border fence, the IDF is protecting civilian homes pic.twitter.com/7JhdJ6Am9d

We stand in solidarity with the Israelis who have taken to the streets this last week to protest their government’s actions.

The silence from international powers with the responsibility of bringing a just settlement of the Israel-Palestine conflict must end.

The UK government must support the UN Secretary-General’s call for an independent international inquiry into the killing of protesters in Gaza and review the sale of arms that could be used in violation of international law.

The events in Gaza and the threat of renewed conflict underlines the urgent necessity of genuine negotiations to achieve a viable two-state settlement that delivers peace, justice and security to both Palestinians and Israelis.”