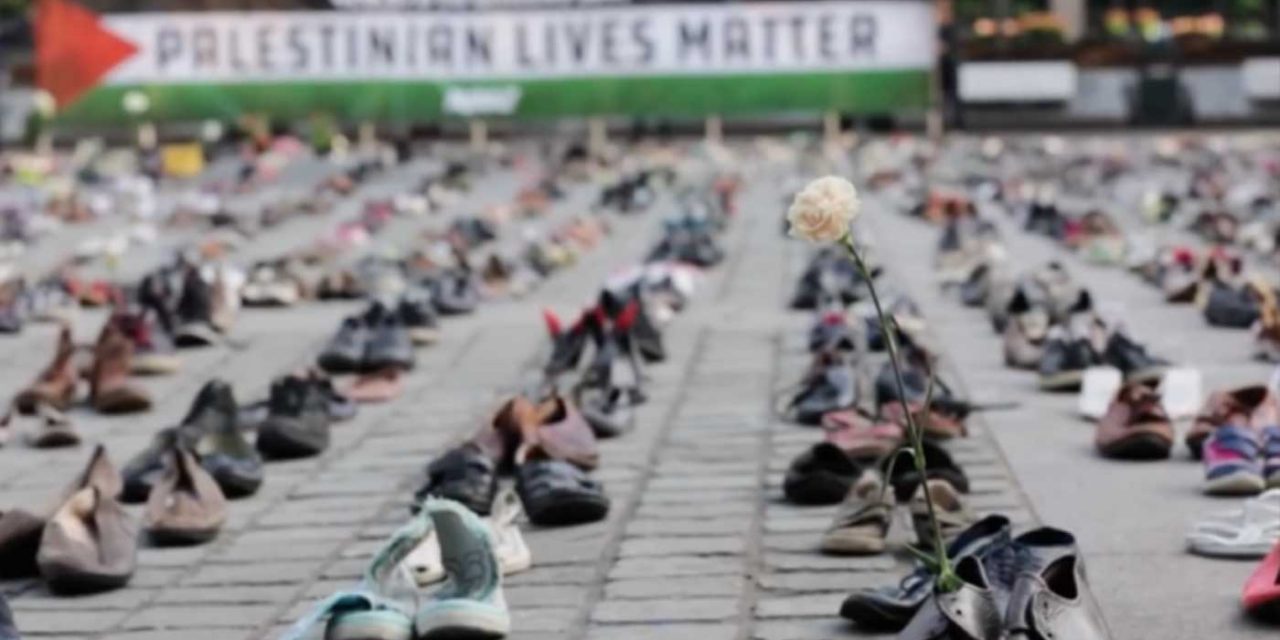 Pro-Palestinian activists placed 4,500 pairs of shoes outside the meeting place of EU foreign ministers to protest Palestinian deaths since 2008.

The Avaaz group, who organised the protest, said its initiative was a “growing call for EU governments to protect Palestinian lives by reining in Israel’s government violence.”

The slogan “Palestinian Lives Matter” was proudly displayed next to the exhibition of shoes. This is clearly not the motto this organisation stands for.

Since 2011, more than 4,000 Palestinians have been killed in Syria, mainly by Assad’s troops. Even this week pictures of Syrian troops raiding the bombed Palestinian community and stealing their possessions has been unreported by so-called pro-Palestinian activists.

None of these Palestinians lives were represented in this protest. Clearly, they didn’t matter enough to the activists.

On top of this, if these activists really cared for Palestinians, they would advocate that Gaza should be freed from the brutal dictatorship of the terrorist group Hamas.

Hamas attacks Israel and uses its women and children as human shields, firing rockets from schools and hospitals. Hamas also endangers Palestinian lives by forcing an economic crisis on the Gaza strip. They spend millions of pounds building terror tunnels (which they use children to dig) and arming their terrorists. All of this money should be used to aid their people.

Far from just mismanaging funds, however, Hamas have actively tried to worsen the situation in Gaza. Just this money, Hamas sent their own terrorists to attack the only oil pipeline into Gaza three times, causing serious damage to it. It was Israel that had to repair the damage and stop their hospitals from running out power.

If these activists cared for Palestinians they would also call for an end to Palestinian Authority’s payments to terrorists, to the tune of £250 million per year, which takes valuable funds away from Palestinian hospitals, schools and needy families. They have condemned President Trump for stopping around $60 million of aid to the Palestinians, but a few weeks later failed to condemn Palestinian President Mahmoud Abbas from purchasing a $50 million private jet.

This protest does not show love for the Palestinians. They are exploiting Palestinian lives to justify their hate for Israel.