‘Kick It Out’ launch campaign to tackle anti-Semitism in football 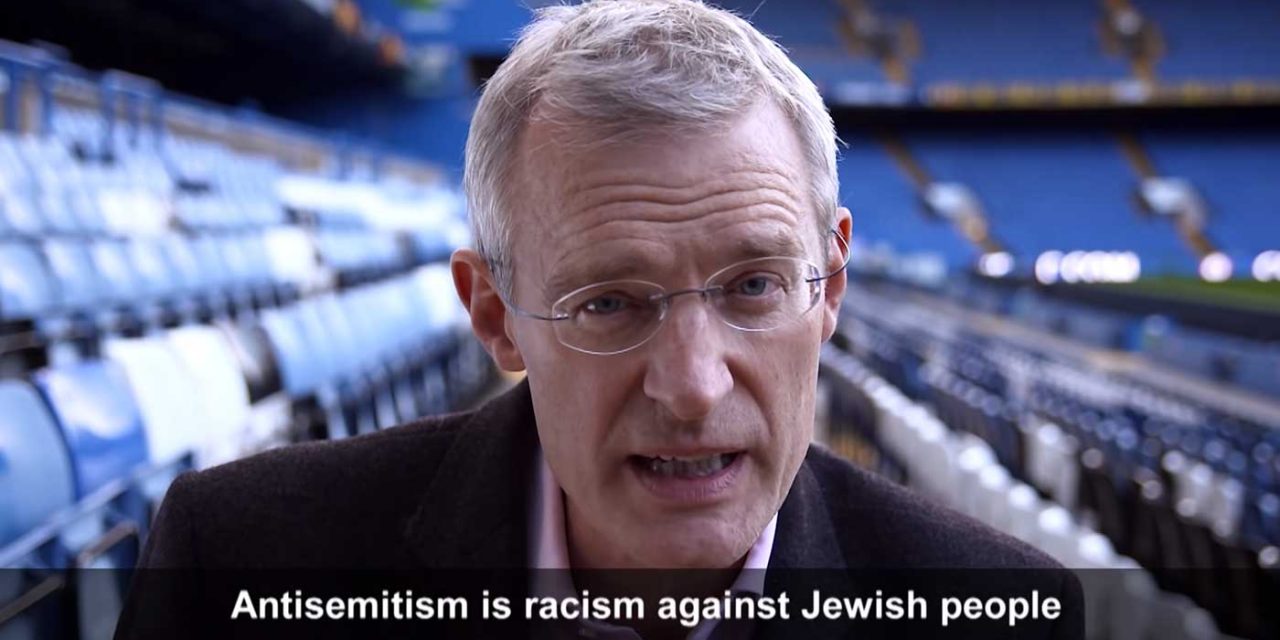 The anti-discrimination charity ‘Kick It Out’ have teamed up with Chelsea FC to launch a campaign against anti-Semitism in football.

A three-minute film (below) has been produced by Chelsea FC and Ivor Baddiel and was given to Kick It Out to use in their campaign to combat anti-Semitism in football.

The video features the BBC’s Jeremy Vine (presenter on Points of View, Panorama, Eggheads and Crime Watch) and Juventus and England international footballer Eni Aluko, who was nominated for PFA Women’s Player of the Year.

“Anti-Semitism is racism and we won’t tolerate it in football or our communities. If you see it or hear it, report it,” the video says.

“The problem of antisemitism in football isn’t as widely discussed as it should be,” said Aluko. “But Chelsea and Kick It Out’s work is shining a spotlight on the issue, and this hard-hitting film will play a big part in that.”

She added: “Jewish people have always been part of the football community, on and off the pitch, so it’s essential we talk about antisemitism and the impact it can have on the Jewish community, the game and society as a whole. I’m proud to play my part in that conversation.”

How they are dealing with anti-Semitism

Kick It Out has been working with the Community Security Trust (CST) which monitors anti-Semitic hate crimes in the UK. Both the CST and Kick It Out have recorded an increase of anti-Semitic incidents at football games. Kick It Out reports that anti-Semitism was the subject of 10% of all discrimination reports to the organisation.

Together, they released an anti-Semitism guide for matchday stewards to help improve awareness of anti-Semitic behaviour and offering information on the current laws around it, as well as advice on what action to take.

At the time of its launch, Kick It Out said, “Antisemitism remains a serious issue in football and wider society. In recent years both organisations have recorded notable increases in the number of antisemitic incidents occurring in England”.

“We believe the booklet will provide vital education for stewards and safety officers across the country to understand, identify and tackle antisemitism in football stadiums. We urge all EFL clubs to utilise this resource and ensure matchday staff are fully prepared and trained to deal with any abuse that may take place.”

Chelsea’s “Say No to anti-Semitism”

Chelsea boss Roman Abramovich is Jewish and recently became an Israeli citizen. He and his club have carried out a number of pro-Jewish and pro-Israel events in recent months.

Abramovich gave more than £375 million to Jewish charities. During the last Premier League season, Chelsea launched the “Say No to anti-Semitism” campaign where the club hosted a Holocaust survivor to speak with the team and dedicated a match to victims of the Holocaust. Chelsea has also offered fans who have been banned because of anti-Semitism the opportunity to visit Auschwitz to teach them about the Holocaust.

To top it off, during the 2018 FIFA World Cup in Russia, Abramovich (who is originally from Russia) paid for 30 special needs children from Israel to attend three matches at the World Cup.