Huda Elmi, a Labour NEC panellist for Chris Williamson, may herself be anti-Semitic and racist 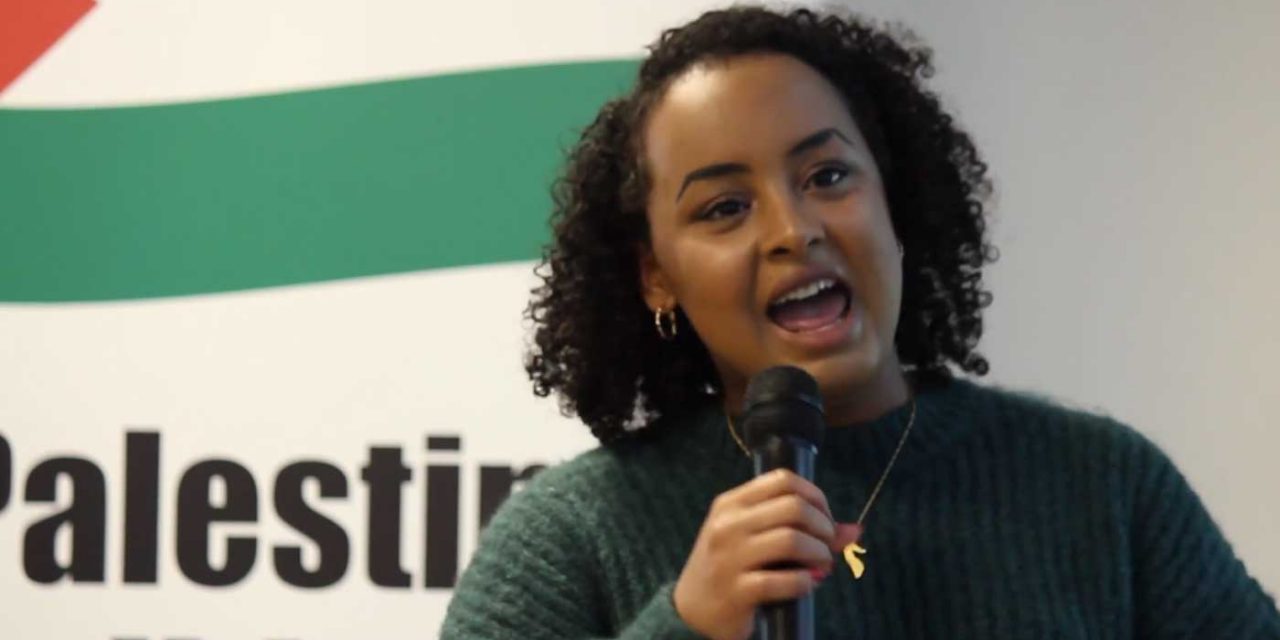 The decision to reinstate MP Chris Williamson back into the Labour Party has been called into question after comments made by one of the panellists show they themselves subscribe to an anti-Israel view that veers into anti-Semitism. She has also made questionable comments about white people.

Huda Elmi was part of the three-person panel from Labour’s National Executive Committee which decided on Wednesday to let off Williamson, the Labour MP for Darby North, with just a warning, rejecting a recommendation by Party officials to refer him to the next stage of Labour’s disciplinary process.

Ms Elmi was elected to the party’s NEC as part of the far-left “JC 9” slate last year (Pete Willsman was also part of JC9 and is currently suspended after wrongly accusing the Israeli embassy of being responsible for “whipping up anti-Semitism”).

Here are some of the things Huda Elmi has said about Israel and anti-Semitism:

Calling Israel a “colonial state” is something Ms Elmi has done on a number of occasions. Here is a video of her claiming that both Israel is a “settler-colonial State”, but also that the World Bank and the International Monetary Fund (IMF) “literally have money stained with blood” and that they are “sustaining that exploitation” (in her mind, the exploitation of “Palestine”) and trying to “tear down” Corbyn.

Chris Williamson no longer suspended thanks in part to Huda Elmi. I found a video where Elmi not only calls Israel a “settler-colonial State” but claims World Bank and IMF “literally have money stained with blood” and are trying to “tear down” Corbyn because he’s pro-Palestinian pic.twitter.com/7l2XsFYCkl

As Jewish Chronicle journalist Daniel Sugarman says, “calling Israel a ‘settler-Colonialist state’ denies the extremely powerful connection that the Jewish people have had, literally for millennia, to the land there, suggesting they are nothing but interlopers. It is deeply, deeply antisemitic”.

Apart from anything else, calling Israel a "settler-Colonialist state" denies the extremely powerful connection that the Jewish people have had, literally for millennia, to the land there, suggesting they are nothing but interlopers.

It is deeply, deeply antisemitic. https://t.co/fCfkZZUGdS

Rallied against the definition of anti-Semitism because of “Palestinians”

She said the definition “doesn’t work to effectively combat anti-Semitism”, despite the fact it is approved of by the UK government and every major Jewish organisation in the UK. Just this week Canada adopted it as their official definition on anti-Semitism also.

She accused the definition of “silencing Palestinian history” and “Palestinian voices”. She goes on to say, “We must respond… in solidarity with the Palestinian people and the struggles of oppressed people everywhere.”

This shows a complete lack of understanding of anti-Semitism for someone who is a panellist on the NEC and who took decisions on cases of anti-Semitism allegations. It is very telling that her response to anti-Semitism was not in solidarity with the Jewish people, or to even mention Jew-hatred or attacks on Jews, but to instead fight for “Palestinian voices” and “oppressed people everywhere”, except the Jews. 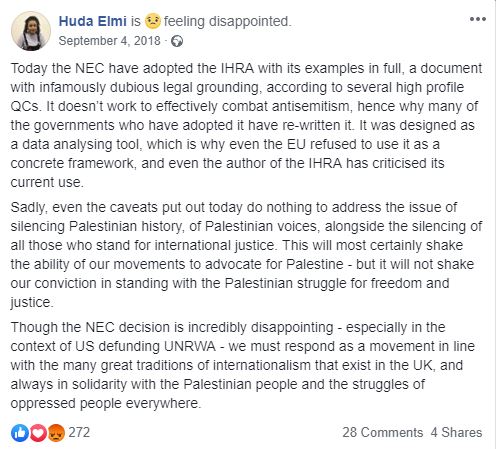 Opposed the Balfour Declaration (and the creation of Israel)

The Balfour Declaration was the document that paved the way for the rebirth of the modern state of Israel. Naturally, this document is opposed by Huda Elmi.

Ms Elmis wrote on Facebook in 2017 that the Balfour Declaration gave “official British support for the for the creation of a settler colonial state in Palestine”.

She went on to say that Israel must not be allowed to present itself as anything other than “an ill-conceived imperial project in which generations of Palestinian have paid the price”. 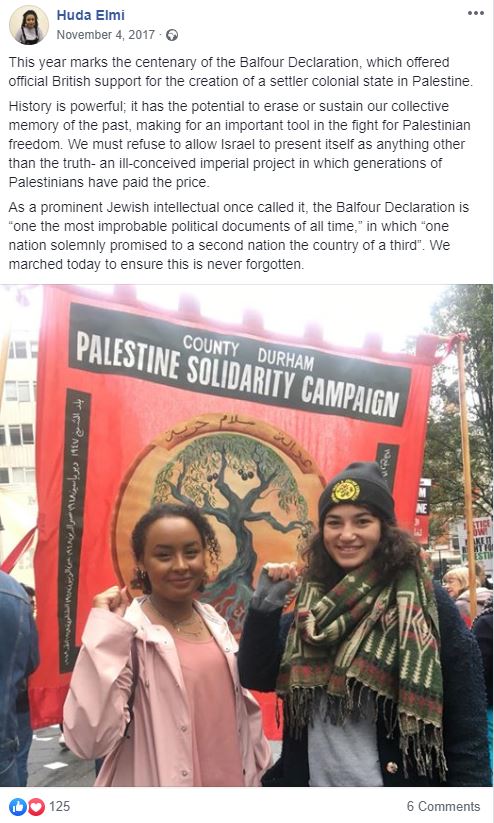 In February, when seven Labour MPs left the party to form The Independent Group, Ms Elmi accused them of simply trying to do damage to Corbyn in a Facebook post.

Someone replied saying, “One of them was a Jewish MP who left over institutional antisemitism”. To which, Ms Elmi liked a post which belittled the comment saying, “Then I trust she’ll be addressing the institutional racism that exists within the Independent Group?”

Ms Elmi also dismissed Rachel Riley, a Jewish TV presenter who has been vocal on the subject of antisemitism in the Labour party and Jeremy Corbyn’s lack of action on the issue, as “an attention seeker.”

This action shows that Huda Elmi thinks little of what a Jewish MP feels about the threats against the Jewish people. Yet, Huda Elmi was on the NEC’s panel on anti-Semitism.

Huda Elmi also said anti-Semitism was being weaponised against Corbyn. 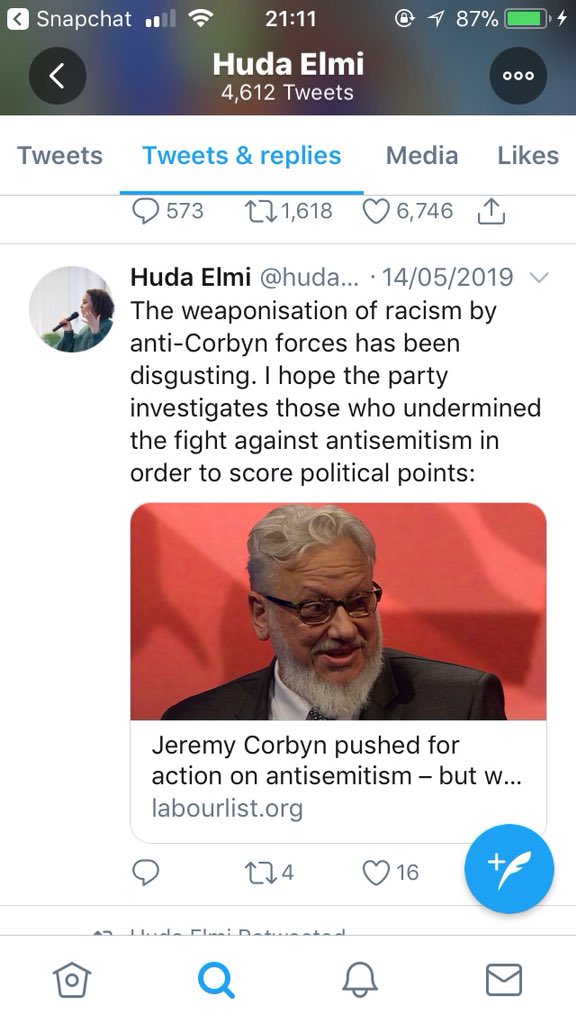 Huda Elmi supports the anti-Semitic Boycott, Divestment and Sanctions (BDS) Movement against Israel. This is a movement that singles out Israel, the world’s only Jewish state, and tries to isolate it for supposed crimes.

Ms Elmi has made a few comments on social media supporting BDS, but here she is speaking at the Palestine Solidarity Campaign (PSC) event about boycotting Israel.

Not only has Ms Elmi shown an anti-Semitic view towards the Jewish state, as well as a deep lack of sympathy for Jewish people in this country, she has also made questionable remarks about white people.

In the video above, for example, she talks of how the British education system is “so white” and how it needs to be “decolonised”. However, it gets worse when she starts to make comments, judging people based on the colour of their skin.

To Labour MP Jess Phillips, Ms Elmi asked: “Jess, why is your feminism so white? Why do you glorify cursing at the first black female mp?” 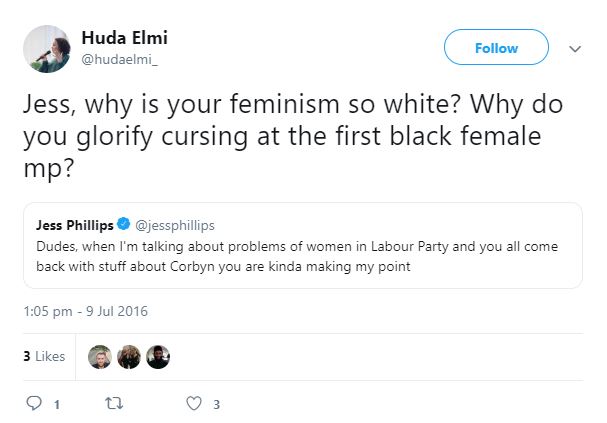 Huda Elmi claimed: “White feminism is dangerous in that it upholds racist structures whilst being perceived as a progressive movement” 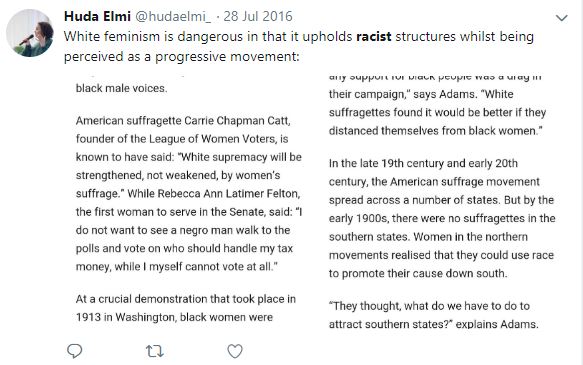 Ms Elmi again railed against “white feminism” when she said, “feminism is murky, especially in IR, where there are too many white women with Eurocentric lenses speaking for”.

She claimed that politics in the UK is racist, saying, “Solidarity to Abdi, it’s so depressing that only white people are allowed to be politically active without fear of unnecessary backlash”. 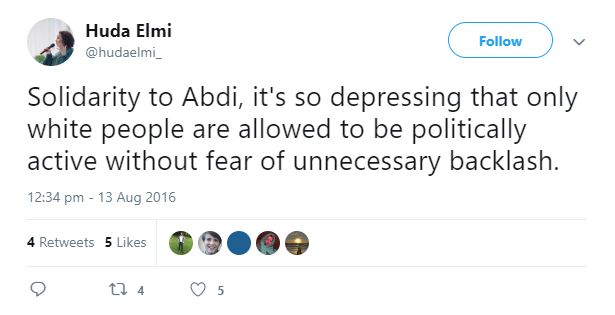 In 2015, Ms Elmi mocked a white woman on Twitter, saying, “LOOOOOLLL, is she okay? Those white tears are looking pretty salty.”

On the subject of the Chilcot Report, Ms Elmi implied that Tony Blair (although she doesn’t mention by name) was “too white” to be “tried as a war criminal”.

“Surely the dubious legal basis is sufficient evidence for him to be tried as a war criminal-or is he too white for that? #ChilcotReport,” Huda Elmi tweeted in 2016. 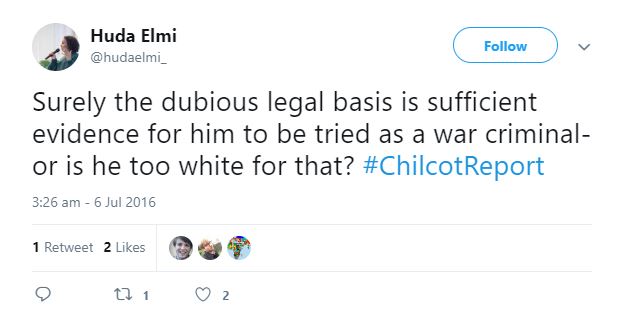 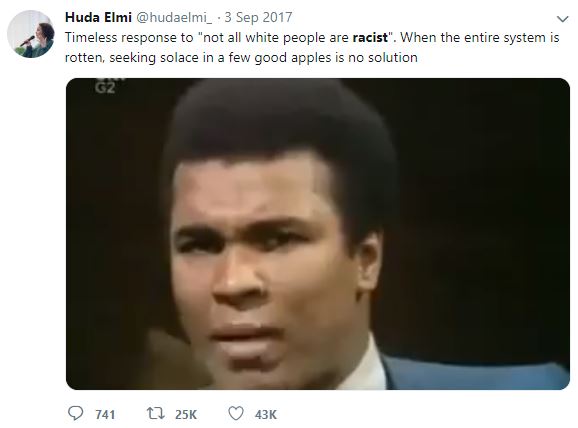 There is no doubt that someone who is positioned to make a decision on anti-Semitism allegations and holds these views is not equipped to be able to make those decisions.

We will leave this final thought from Huda Elmi herself when she said: “Many racists have and will continue to lose their jobs as a consequence of their hateful prejudice. Why is she exempt?”