Corbyn, Abbott and McDonnell all voted AGAINST banning Hamas, Islamic Jihad, Al-Qaeda and others 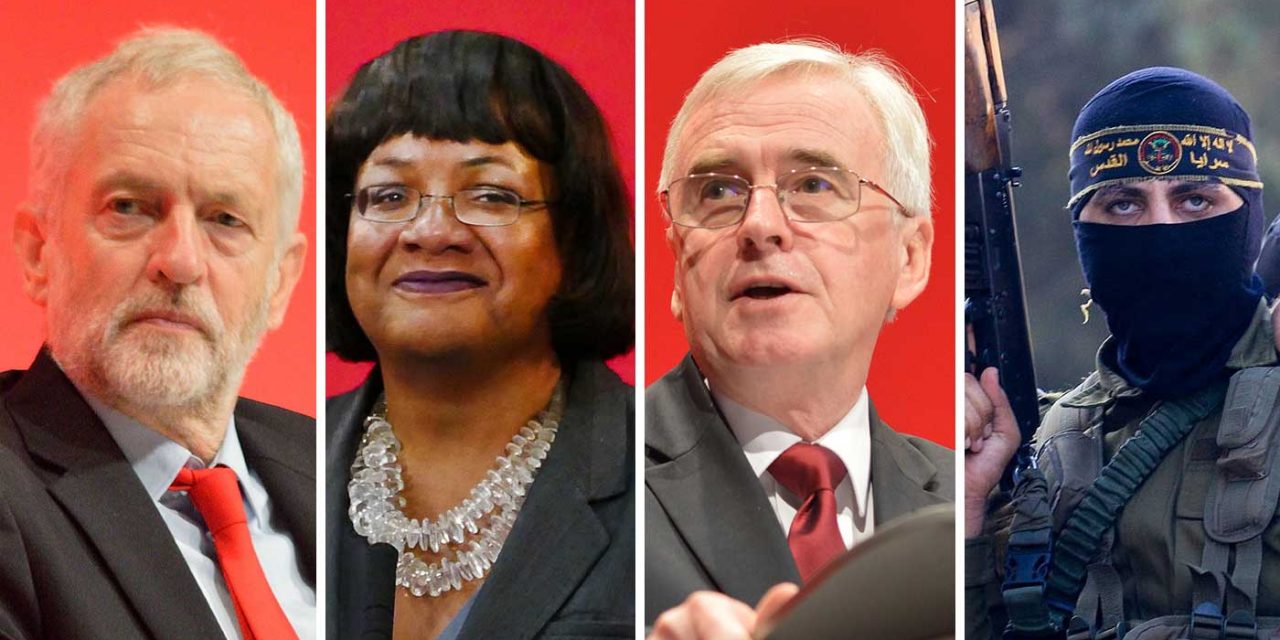 Eighteen years ago the UK Parliament voted to proscribe some of the world’s most dangerous terrorist groups, including Hamas, Al-Qaeda and Palestinian Islamic Jihad (PIJ) which fired more than 400 rockets into Israel this week. And you can probably guess from the title who voted against their banning.

The votes were cast and 396 of the UK’s elected parliamentarians voted in favour. However, 17 backbench MPs opposed this motion. These 17 backbench MPs were on the fringes of politics. Today, a few of them are looking to run the country.

Most of the 17 have retired from politics, but four of them remain and have shifted from the fringes to be front and centre in the mainstream of politics, and yet their views on this issue have not changed.

Labour leader Jeremy Corbyn, Shadow Chancellor John McDonnell and Shadow Home Secretary Diane Abbott are three of these MPs along with Labour MP Dennis Skinner. The late Tony Benn, who was a dear friend and mentor for Corbyn was also one of the parliamentarians who voted against this motion.

The terrorist groups being proscribed in the 2001 bill were – Hamas, terrorist organisation engaged in suicide bombings against Israelis at the time. Palestinian Islamic Jihad (PIJ), which at the time was angry that Hamas was not committing enough suicide bombings and just this week launched more than 400 rockets at Israeli civilians. And Al-Qaeda, Osama Bin-laden’s terrorist organisation that months after this bill passed committed the 9/11 attacks. Other terrorist groups of a similar ilk were also on the table to be banned.

The bill was an amendment to the “Prevention and Suppression of Terrorism” act, something that should have gained universal support within the House of Commons, but Corbyn opposed the bill and gave a statement with his reasons why.

He started by cricising the UK’s handling of “anti-terrorist legislation” as “not good” and inquired if the organisations on the list had been placed there because certain governments were “constantly pressing the British Government to close down political activity in this country by their opponents.”

Corbyn explained that “None of us likes bombing. None of us supports terrorism. None of us wants violence. The end game to violence and to achieving peace is a political process, giving people and their organisations the political space to argue and debate.”

This is interesting because Corbyn appears to be saying that he doesn’t support terrorism, but believes that those engaged in the violence are only carrying out the violence to win democratic freedoms for their people. It is hard for most people to rationalise that Hamas, Al-Qaeda and Palestinian Islamic Jihad are all engaging in the eradication of the Jewish people because they want to give their people “space to argue and debate”. However, this appears to be what Corbyn believes.

Corbyn then argues that the proscription of terrorists from Britain would be against “human rights”.

“I believe that there are serious problems with the legislation’s compliance with the European convention on human rights and with our own Human Rights Act 1998,” Corbyn said.

He then claimed it was unfair because “the order would, as I understand it, take effect immediately. Consequently, anyone involved in those organisations will automatically become a criminal.” Which appears to be exactly what most people think – terrorists are criminals.

Corbyn then claims that the bill would give members of certain communities the impression that the UK is “interested in banning their organisations because they are calling for fundamental political changes in their home countries.”

He asks, “How many more organisations will be put on the list because Governments around the world find it inconvenient that international organisations use London as a base from which to spread political propaganda aimed at securing change in their home countries?”

Corbyn concludes his statement by saying: “The House should not pass this order tonight. I very much hope that the Home Secretary will reconsider seriously the great mistake that I believe he is making.”

During Corbyn’s statement he took an interruption by Diane Abbot who said that she opposed terrorism and acknowledged that “some” on the list had engaged in terrorism, but argued that “the history of Britain’s withdrawal from empire is littered with groups that were described as terrorists, but survived to take tea with the Queen.”

Labour will clearly deny that Corbyn was talking about Hamas in all this. They may claim he was talking about other terrorist organisations on the list. However, you may recall that he called Hamas his “friends”. Well straight after that he said this bombshell:

“The idea that an organisation (Hamas) that is dedicated towards the good of the Palestinian people and bringing about long-term peace and social justice and political justice in the whole region should be labelled as a terrorist organisation by the British government is really a big, big historical mistake and I would invite the government to reconsider their position on this matter and start talking directly to Hamas and Hezbollah…”

You will notice that he has used the same argument in the debate about proscribing Hamas as he did when talking about Hamas a few years later.

Corbyn believes Hamas, a terrorist organisation that has committed suicide bombings and killings of Israelis throughout Israel and is dedicated to the eradication of the Jewish people, is actually only looking to bring about “long-term peace and social justice”.

Sadly, the media only tells people that Corbyn called Hamas and Hezbollah his “friends” without adding the full context of his statement.

Palestinian Islamic Jihad (PIJ) – one of the groups Corbyn didn’t want to be banned – are currently in the news because, in the last 48-hours, PIJ terrorists have launched over 400+ rockets at Israeli civilians.

They are doing this not because they are trying to bring about “peace and social justice” as Corbyn appears to believe. They are a terrorist organisation that trains terrorists, carries out terror attacks and has a radical ideology that wants to irradicate the Jews and convert all non-Muslims to their version of Islam.

Here is a video of PIJ terrorists themselves saying they will “chase the Jews from Palestine” and that if they don’t submit to Islam “even if they go to the end of the world we will chase them and we will kill them”.

A second terrorist in the video says, “I advise my fighting brothers to continue killing the Jews to the last one.”

This is what the PIJ call for – genocide. Corbyn would have just sat by. The UK deserves betterpic.twitter.com/1B9iAH94tj

The first terrorist then explains how at the PIJ “academy” they “teach our brothers invasion and incursion”.

This is just a glimpse at the radical ideology of this terrorist organisation, just one of the many Corbyn has defended (and defended repeatedly) over the years. Corbyn needs to understand that his “friends” are not fighting for social justice, they want to destroy Israel and the Jewish people.

It is time the UK public wakes up to the threat caused by these formerly backbench MPs on the extreme fringes of politics who are now looking to lead the country.