General Allenby and his extraordinary Christmas present for Britain 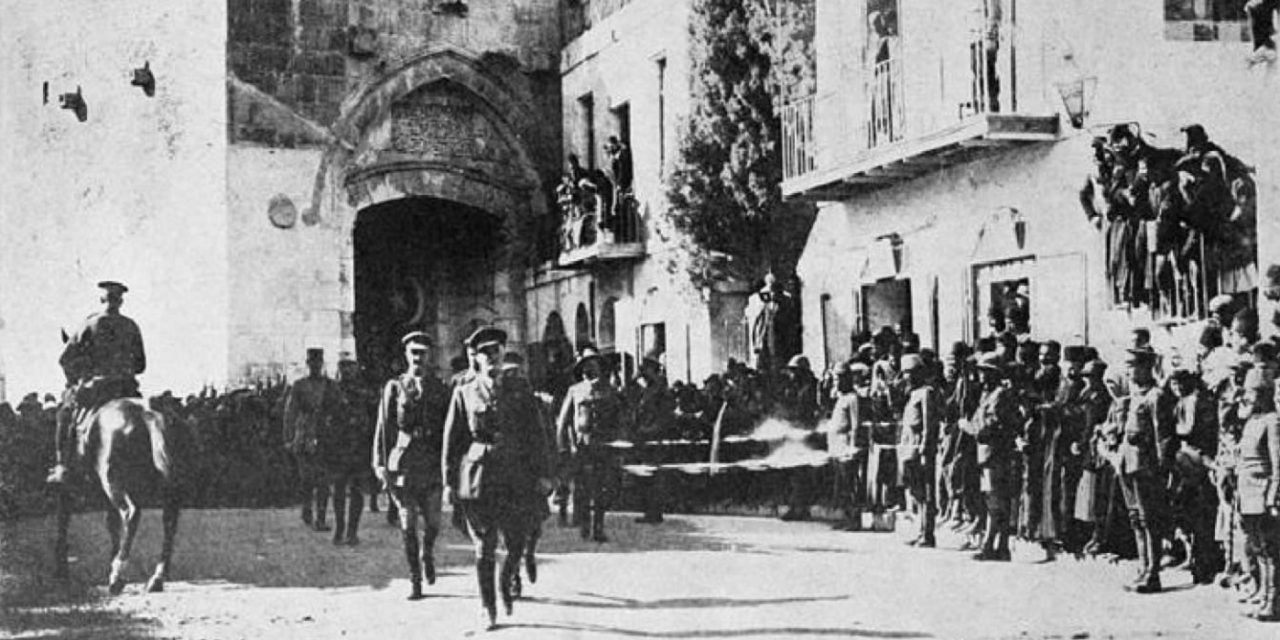 This article appeared in the November issue of CUFI-UK’s TORCH magazine. Click here to subscribe for free

Edmund Allenby was one of Britain’s leading Generals in World War I earning himself a knighthood for his efforts on the Western Front. Allenby’s most famous victories, however, took place in the Holy Land.

During the latter part of the First World War, General Allenby was sent to head up the British expedition in Egypt. At first he saw it as a demotion from his success against Germany. Upon arriving in the Middle East, however, his opinion quickly changed and he realised the move was in fact inspired.

British Prime Minister Lloyd George asked General Allenby “to take Jerusalem as a Christmas present for the nation.” Allenby set about that task and, being raised with a strong Christian faith, saw the significance of his efforts. Whilst his mission was defeating the Turks, his conscience told him he had to do so without damaging the holy city of Jerusalem.

Allenby’s men were inspired as they pushed towards Jerusalem, overwhelming the Turks. Other forces joined under his ranks, including soldiers from Australia, Canada and South Africa. The decisiveness of Allenby’s victories scared the Turks into retreat, which brings us on to a rather comical story about Jerusalem’s liberation.

It was the evening of 8 November 1917, and a small regiment of the British army had set up camp near Jerusalem. They were the closest military unit to Jerusalem, and unbeknown to them, the Turks were retreating from the city.

The following morning officers in the camp heard a cockerel crowing from a nearby village so they sent their cook into the thick morning fog to find some eggs for breakfast.

The cook was Private Murch, who was described as “a miserable specimen”. His clothes were “covered with grease and filth”, he wore a misshapen helmet that was “at least one size too small”, and his shoes were so worn that his “very big red toe” stuck out of one of them.

Murch got lost, and after wandering through the “wilderness”, climbing up and down rocky hills and having repeatedly stubbed his exposed big toe, the private decided to rest for a few moments on a large rock at the edge of a road. As he sat there puffing on a cigarette his eye caught sight of something unusual. Away in the distance a group of people were carrying white banners on long poles making their way towards him.

Before he knew it men, women and children had gathered all around him in what he described as “wild excitement”. They were clapping, cheering and shaking his hand.

Suddenly, however, the noise quietened down as a carriage drew up to him. A finely dressed man stepped out and greeted him.

“You are a British soldier, are not you?” he asked in broken English.

“I should say so,” replied Private Murch in a rich cockney accent.

“Where is General Allah Nebi?” enquired the man, presumably meaning General Allenby. “I want to surrender the city please. ‘Ere are ze keys; it is yours!” said the stranger, producing a large bunch of keys.

“I don’t want yer city. I want some heggs for my officers!” yelled the cook in disgust.

When Murch returned to camp, hot and out of breath, his officers demanded to know what he had been doing for the last four hours.

As Murch described his run in with the bunch of lunatics who tried to give him keys, it dawned on the officers that “one of the greatest events in the history of the world” had just taken place.

When Murch came to the end of his story, the colonel turned to those gathered and said quietly, “Gentlemen, Jerusalem has fallen”.

The Turks had indeed abandoned Jerusalem and the city was left undefended for the British to liberate. The only problem was that the “finely dressed man”, otherwise known Hussein Bey al-Husayni, the Mayor of Jerusalem, couldn’t find someone suitable to hand the keys to.

The colonel seized the telephone and informed Brigadier-General Watson. Watson was the nearest general to Jerusalem, and was “wildly excited” by the news. He was determined to make a name for himself as the man who liberated Jerusalem.

“Where’s my horse?” he shouted, “Saddle him up immediately and tell the groom to follow me”. He put on his best red cap and within minutes was galloping madly to Jerusalem, followed by an orderly on a mule.

Watson’s commanding officer, Major-General John Shea, was notified by telephone of the events taking place and on hearing that Watson was going to accept surrender immediately ordered, “Stop the brigadier, I will myself take the surrender of Jerusalem!”

It was too late. Watson was already en-route and was met by the mayor of Jerusalem and a small crowd outside the Jaffa gate. Watson triumphantly accepted the Mayor’s surrender of the city and proudly returned to his camp. On his return, however, Watson was told that Major-General Shea was on his way to accept the surrender and knew his only option was to return the keys to the mayor. He reluctantly did this and asked the mayor to wait for Major-General Shea who would be arriving shortly.

Major-General Shea drove into Jerusalem a while later and was again warmly greeted by a slightly larger crowd. The mayor once again surrendered the city and both he and the Major-General gave short speeches to loud cheers from those gathered.

Shea’s first duty on returning to his headquarters was to send a telegram to the commander-in-chief, General Allenby, which was worded as follows: “I have the honour to report that I have this day accepted the surrender of Jerusalem.”

By return came the message: “General Allenby will himself accept the surrender of Jerusalem on the 11th inst.; make all arrangements.”

Alas, the keys to Jerusalem had to be returned to the mayor once again.

Two days later, on 11 December 2017, the commander-in-chief himself, Edmund Allenby, accepted the keys to the city. This time, when Allenby liberated Jerusalem, the whole city was aware that the Turks had left and the British had arrived, and there was a proper official procession and celebrations throughout the city to mark the occasion.

Allenby’s entrance was also of significance. He wanted to show the people of Jerusalem that he was not coming to conquer the city, but to liberate it. The Jaffa Gate was opened for the first time in many years and Allenby famously entered the city on foot.

His entry on foot was for three reasons. Firstly, his gesture was one of respect to Jesus, who had ridden a donkey into the city. Secondly, Allenby wanted to show the people of Jerusalem that he came peacefully to liberate the city not to conquer it. And thirdly, this was in intentional contrast to Kaiser Wilhelm II, who visiting the Holy Land in 1898, insisted on entering the Old City seated on a white horse.

Both Allenby and Mayor al-Husayni gave speeches outside David Citadel, a place Allenby chose himself, and he was finally handed the keys to the gates of the city.

Allenby had fulfilled his faithful mission in Jerusalem. He had liberated the city without a single shot being fired and presented the people of Britain with a Christmas present that would change the course of history.