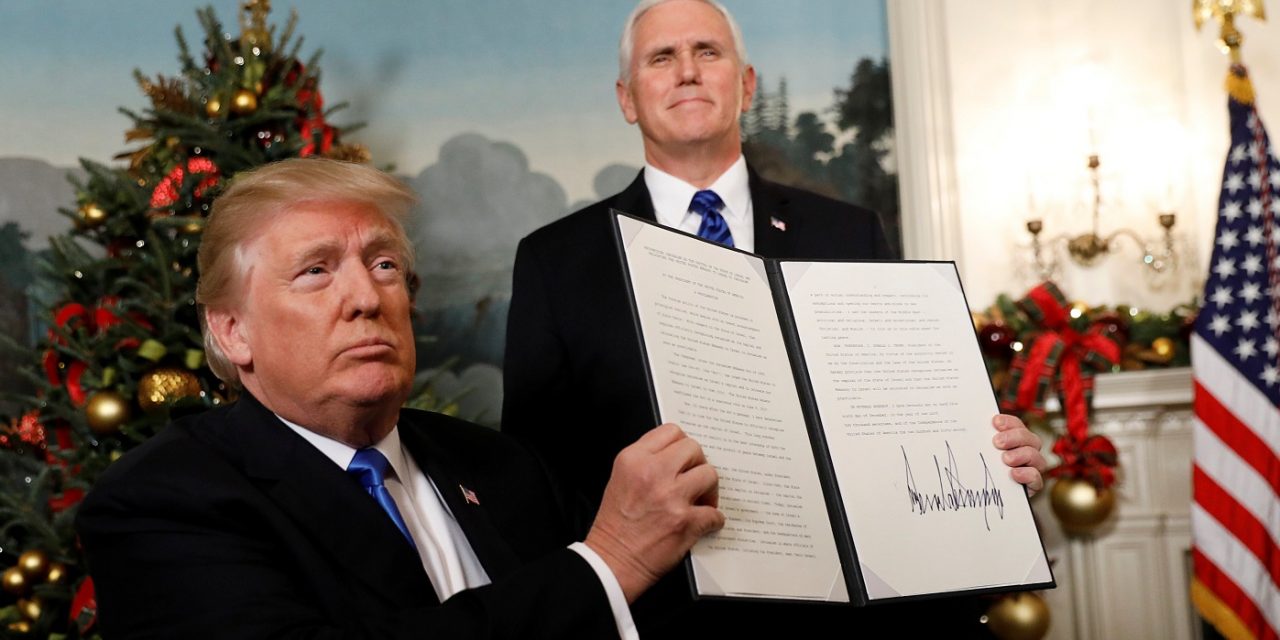 On Wednesday, CUFI welcomed President Donald Trump’s formal recognition of Jerusalem as the capital of Israel and his announcement that the US will move its embassy from Tel Aviv to the Holy City.

CUFI in the United States has made moving the embassy to Jerusalem a central focus of its 2017 agenda.  Founder and Chairman, Pastor John Hagee, has used White House audiences with President Trump and Vice President Mike Pence to urge them to move the embassy.  Days before Trump’s inauguration, the CUFI Action Fund held a “Washington fly-in” during which more than 260 leaders representing 49 states urged that the embassy be moved. And CUFI members have sent more than 137,000 emails to the White House in support of moving the embassy to Jerusalem.

When Vice President Pence spoke at CUFI’s Washington Summit in July, his unprecedented statement that the embassy move was a question of “when, not if” was received with an extended standing ovation.

MUST WATCH: Why the embassy move matters to Christians

“Jerusalem has been the epicenter of the Jewish faith since King David danced into the city with the Ark of the Covenant over 3,000 years ago. It is the capital of the Jewish state, and I am grateful to the President for changing American policy to finally reflect this reality. I look forward to the day we open the doors of the US Embassy to Israel in Jerusalem,” Hagee said.

“In recognizing Jerusalem as Israel’s capital and beginning the process of moving the US embassy there, President Trump has shown that he hears the voices of the millions of Americans who stand with Israel and respect the Jewish state’s sovereign rights. This move strengthens America’s international position by making clear that we will stand with our allies, oppose our enemies, and will never be bullied by terrorists,” noted CUFI Action Fund Chairwoman Sandra Parker.

“Many critics are claiming that this move will do damage to the chances for peace. We disagree. The main obstacle to peace has been the dark Palestinian dream that they can drive the Jewish people from Jerusalem and Israel.  Pres. Trump’s action helps to shatter this dark dream and brings closer the day when the Palestinians will finally accept Jewish rights in the land and recognize the need to compromise with Israel. This is a long overdue dose of reality,” said CUFI founding executive director David Brog.

CUFI-UK Executive Director Des Starritt said “President Trump has shown courageous leadership in recognising Jerusalem as the Capital of Israel. This is clearly the right thing to do. Whilst many of the western world leaders and the United Nations may continue to deny this reality it’s now time for British foreign policy to change. This is an opportunity for the UK to take a similar bold stand for Israel, to stand up for truth and be resolute against incitement and terror.”

"The day will come when President Donald Trump moves the Ameri…

"It is not a matter of 'If', only 'when'" These were the words of US Vice President Pence at this year's CUFI Washington Summit. Today, President Trump will announce that the day has come.#Pence #Trump #CUFI #Embassy #Jerusalem