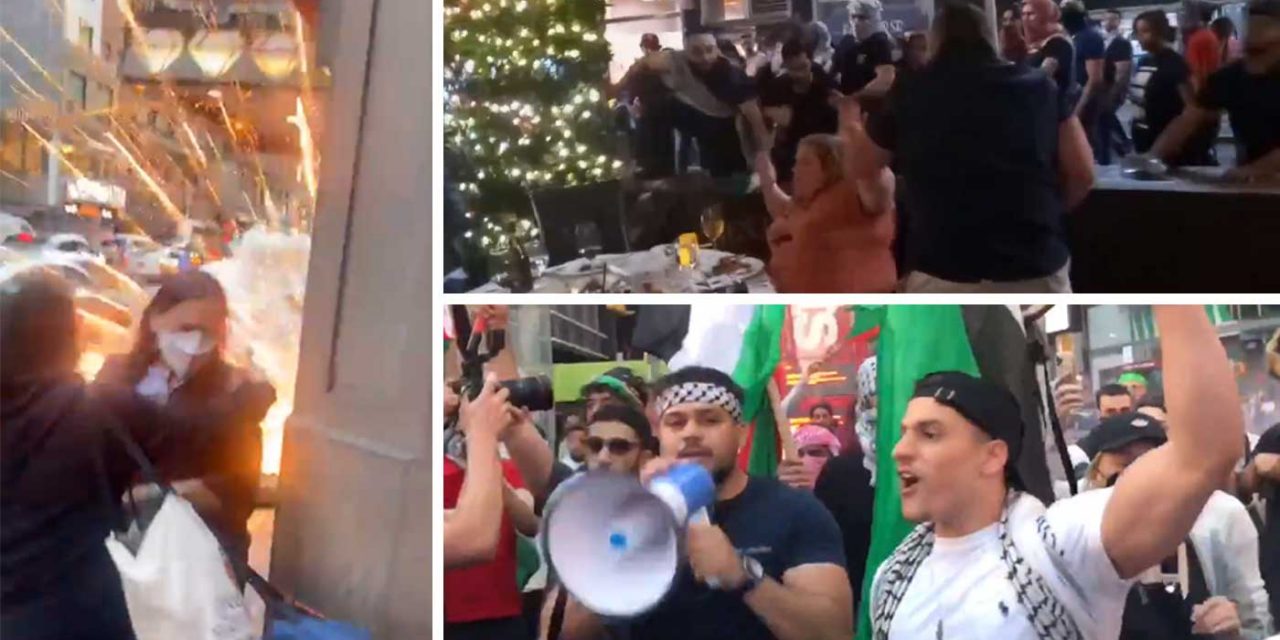 Anti-Semitic incidents are increasing throughout the Western world putting Jewish communities at risk with most of the actions being taken by anti-Israel activists / pro-Palestinian supporters. Remember, they are not attacking Israeli organisations, they are targeting Jews – it is pure anti-Semitism.

Sadly, much of this hatred against the Jews is fuelled by a one-sided narrative in many media outlets that paints Israel as the ‘bad guys’ and paints Hamas as the ‘innocent victims’ when in reality, Hamas, the outlawed terror group that uses civilians as human shields and fire rockets at Israeli civilians, are the real bad guys while Israel is doing all it can to stop the violence while saving lives on both sides.

It is fair to say that pro-Palestinian activists have been galvanised to express their anti-Semitism. Equally, we should point out that the anti-Semitism being expressed by these radical activists is the same hatred expressed by Hamas, which seeks to wipe the Jews out in Israel.

Below are just some of the incidents that have happened in recent days in Jewish communities in the UK, America and throughout Europe.

An explosive was thrown at Jews in New York on Thursday.

The video below shows people fleeing as it is thrown while someone shouts “F*** Israel” followed by the explosion.

Just Anti-Zionism™ having a field day out there https://t.co/FpQpkSdboa

In the next video, Jewish diners are spat at and attacked by pro-Palestinian protesters.

Absolutely unfathomable to see this and many other acts of anti-Semitic violence happening in New York City over the past few days.

When Will the mainstream media cover the rapid anti-Semitism ravaging this country?!

This video shows an Orthodox Jewish man being chased by two cars with Palestinian flags. The video the filming of a monitor displaying CCTV footage with a female voice exclaiming, “the man is chasing you”, likely speaking to the man being chased in the video, who responds, “one car and the second car.”

ANOTHER antisemitic attack on Jews in LA – an Orthodox Jewish man was chased by two cars waving Palestinian flags as he was leaving synagogue last night! pic.twitter.com/GtJDo6k5n5

In this video Jews are seen being violently attacked by pro-Palestinian activists in New York while police do little to stop the violence.

Attacking Jews in NYC will not free Palestine

In Manhattan, New York two Jewish men, one of whom was holding an Israeli flag, were attacked by a pro-Palestinian mob with police having to separate the groups.

Another video from New York shows pro-Palestinian protesters getting into confrontations with some pro-Israel protests and some Jewish bystanders. Police are having to separate them and a smoke bomb is picked up by the person filming.

The NYPD corrals the free palestine protesters away from pro Israel demonstrators after more skirmishes break out between groups, smoke bomb type fireworks and glass can be found on the floor pic.twitter.com/Lf37QH3bMU

This video shows a pro-Palestinian mob brutally beating up a Jewish man, with one of the rioters using a pole to beat him while he lays on the floor between two cars.

An off-shoot of the pro palestinian rioters from earlier broke off onto a midtown street and are seen attacking a Jew with their signs in a group pic.twitter.com/qx0zYUSqnd

This next video is in Los Angeles. A convoy of pro-Palestinian protesters drove through a Jewish area of the city. A group of around 30 protesters went up to diners at a restaurant and asked who was Jewish. Two men said they were and were assaulted violently.

You can see in this first video at the 1:15 mark that a man to the right of the camera is pushed to the ground and kicked. An Armenian man then swings a metal freestanding poll at the group before getting violently beaten by at least three individuals.

I’m appauled! Yesterday night pro #Hamas fanatics drove in #LosAngeles and attacked iccocent #Jewish bystanders. This is the so called #peace that #Palestinians and their supporters envision? By attacking Jews? This is pure #antisemitism. @LAPDHQ @ericgarcetti @BeverlyHillsPD pic.twitter.com/SovgW7CW7R

The next video shows the aftermath of what happened.

And the last one. #weho / #LA #Antisemitism masked as #FreePalestine pic.twitter.com/UvRr32tMJw

This next video shows a pro-Palestinian person threatening grievous bodily harm to a man wearing an IDF hoodie.

In the video, an unknown woman threatens, “I hate your shirt, I’m a setting it on fire.” The man smiles and chuckles slightly and the woman responds, “I’m serious.”

Horrific – a student at @CUNY, Nerdeen Kiswani, threatens to set on fire a man wearing an #IDF sweatshirt.

“I hate your shirt, Ima setting it on fire. I’m serious” she can be heard saying.
We demand this is immediately looked into and the Ms. Kiswani face disciplinary actions! pic.twitter.com/TL1J4JrI63
— StopAntisemitism.org (@StopAntisemites) September 22, 2020

This next video shows a Jewish man being abused and attacked by pro-Palestinian protesters simply for being Jewish. They start accusing him, saying, “You wanna kill babies”. There is no reason for them to approach the man apart from the fact they see he is Jewish.

Racists in Manhattan harass a Jewish man right in front of a cop. All this man did is wear a yarmulke and mind his business. pic.twitter.com/c7ofGfm3XV

The attacks were not isolated to the USA.

In Vienna, Austria an anti-Israel protest turns anti-Semitic when the crowd focused their outrage against Jewish students. At one point a man shouts “shove your Holocaust up your ass.” Shamefully the crowd responds by cheering and clapping.

It’s not the man shouting “shove your Holocaust up your ass” at Jewish students in Vienna that’s shocking. It’s the dozens of young women whooping and cheering. via @Bini_Guttmann pic.twitter.com/Za54iknu6G

And of course, these scenes are reminiscent of the anti-Semitism on display in London. Below is a video showing a similar style pro-Palestinian convoy shouting anti-Semitic abuse.

Solidarity with Jewish communities across the UK that have been at the receiving end of vile anti-Semitic abuse for the past week. pic.twitter.com/JqI7FCevt5

UK hate crime statistics show the anti-Semitic incidents in the UK have risen drastically in the last few weeks with most attacks being linked to the Israel-Gaza conflict. This rise is likely to be seen in other countries also.

It is shameful that these pro-Palestinian protesters are bringing the hatred, terror and anti-Semitism of Hamas to cities in the West.

We must stand against this hatred.