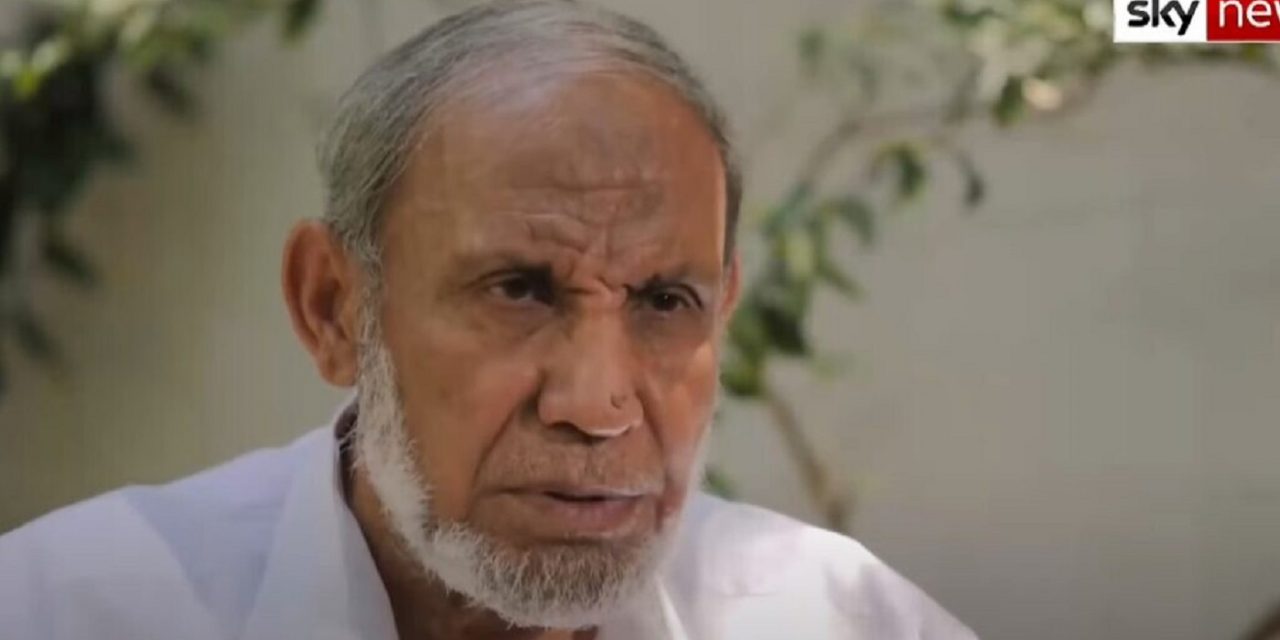 In a rare interview, Hamas co-founder Mahmoud al-Zahar tells Britain’s Sky News that Israel has no right to exist, and seems to acknowledge that Hamas targets Israeli civilian populations.

The interview was conducted this week by Sky’s Middle East correspondent, Mark Stone, who visited al-Zahar in his Gaza home.

In stilted English, al-Zahar explains that Hamas’s “victory” is a function of the group’s ability to fire rockets on densely populated Israeli civilian areas.

“The new element” in the latest round of fighting, al-Zahar says, “is the degree of the resistance movement, particularly in Gaza, to attack the Israeli targets at very important points, including most of the overcrowded area in the civilian society. So for how long the Israeli will accept that, I think this is the main issue.”

Stone challenges al-Zahar, “You are firing rockets and missiles from civilian areas here in Gaza at civilians in Israel. That’s not acceptable, that’s a war crime.”

Al-Zahar rejects the accusation that Hamas endangers Palestinians — but does not challenge the assertion that it targets Israeli civilians.

“No single rocket was sent from a civilian area. We [fired] most of the rockets from the border,” he tells Stone.

“That’s not true, though, is it? Because we’ve seen video of rockets being fired from within the built-up area of Gaza City at Israeli communities,” Stone says.

A short time later, Stone asks Al-Zahar point-blank: “Does the State of Israel have the right to exist?”

Al-Zahar replies, “No. Why? Why? You are coming from America and you take my house. You came from Britain and you took my brother’s house. This is a settlement. You are not a citizen. We are the owners of this. This is an Arabic area. This is well-known as an Islamic area, well-known.”

The conversation ranges further, dealing with the two-state solution, with Hamas’s spending on military infrastructure instead of Gaza’s impoverished population, and other issues.