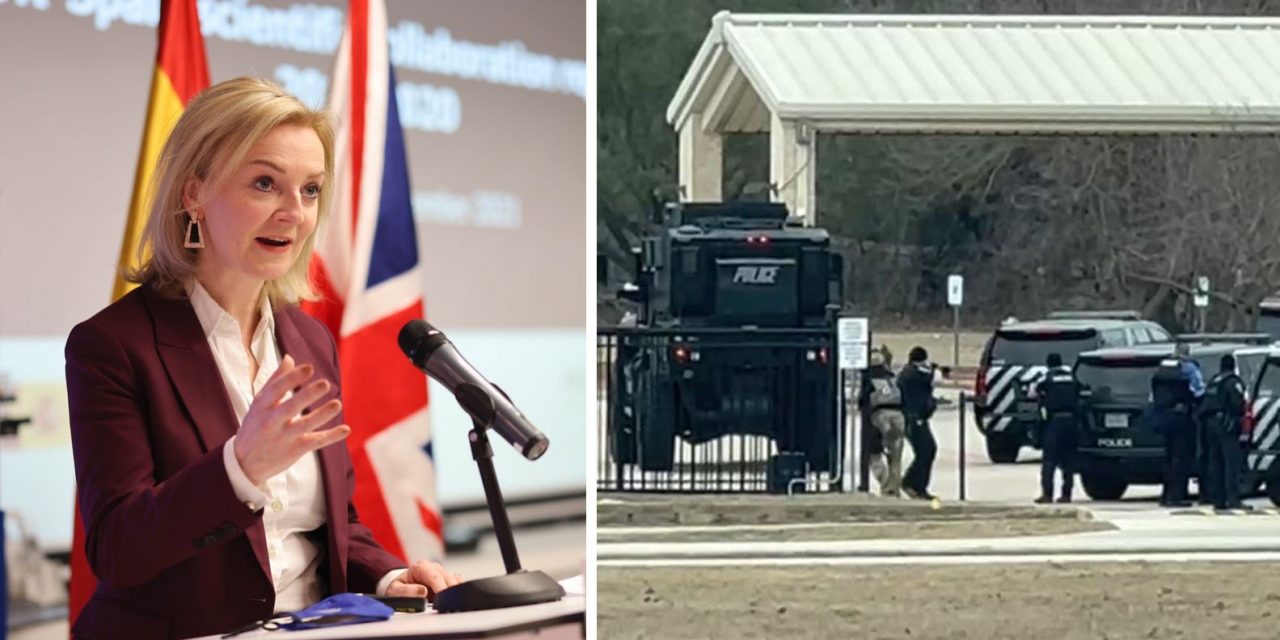 Meanwhile, the UK Foreign Office confirmed that the gunman, who was shot dead by police when they stormed the building, was a British citizen and has been named by the FBI as Malik Faisal Akram.

“My thoughts are with the Jewish community and all those affected by the appalling act in Texas. We condemn this act of terrorism and anti-Semitism,” she said on Twitter.

“We stand with US in defending the rights and freedoms of our citizens against those who spread hate.”

My thoughts are with the Jewish community and all those affected by the appalling act in Texas. We condemn this act of terrorism and anti-semitism.

We stand with US in defending the rights and freedoms of our citizens against those who spread hate. 🇬🇧 🇺🇸 👇 https://t.co/36Eb8lRQTV

Prime Minister Boris Johnson has said he “absolutely stands in solidarity with the Jewish community, both in the UK and indeed in Texas”.

His official spokesman said: “This was a terrible and anti-Semitic act of terrorism.

“The Prime Minister’s thoughts are with the Jewish community both in Texas and around the world and we stand with our American friends against those who seek to spread hate and fear around the world.

“British authorities continue to provide full support to Texas and the US law enforcement agencies.”

Akram took four people hostage, including a rabbi, inside the Congregation Beth Israel synagogue in Colleyville at around 11am local time on Saturday.

One was freed after six hours before an FBI SWAT team entered the building at around 9pm, shot the attacker dead and released the other three unharmed.

The first part of the siege was captured on a Facebook livestream of the morning shabbat, which was cut off at about 2pm. He was heard shouting at the congregation in a strong northern British accent: ‘If anyone tries to enter this building – everyone will die’. He added: ‘I’m gunned up. I’m ammo-ed up. Guess what, I will die. I am going to die, so don’t cry for me’ before hurling anti-Semitic insults.

The rabbi is understood to have been leading the service as normal when a man entered the building and began shouting that he wanted to free his “sister”, Aafia Siddiqui, a Pakistani neuroscientists suspected of having links to al Qaeda, who is an in-law of the chief architect of 9/11 and who herself is serving an 86-year prison sentence for trying to kill US military officers while in custody in Afghanistan.

He said he wanted to speak to Siddiqui, who is being held at FMC Carswell in Fort Worth, Texas, following her conviction in 2010.

Rabbi Cytron-Walker was forced to make contact with a rabbinical colleague in New York during the 11-hour siege — apparently with a view to persuading the local authorities to release Siddiqui.

As the disruption continued to be transmitted on Facebook, those following insisted that they could hear a British Pakistani accent. Meanwhile those associated with Siddiqui said the man was not her brother, though this has not been confirmed.

Towards the end of the congregants’ ordeal, one of the hostages was let out of the building. A SWAT team stormed the synagogue and the Texas governor, Gregg Abbott, announced that the crisis was over.