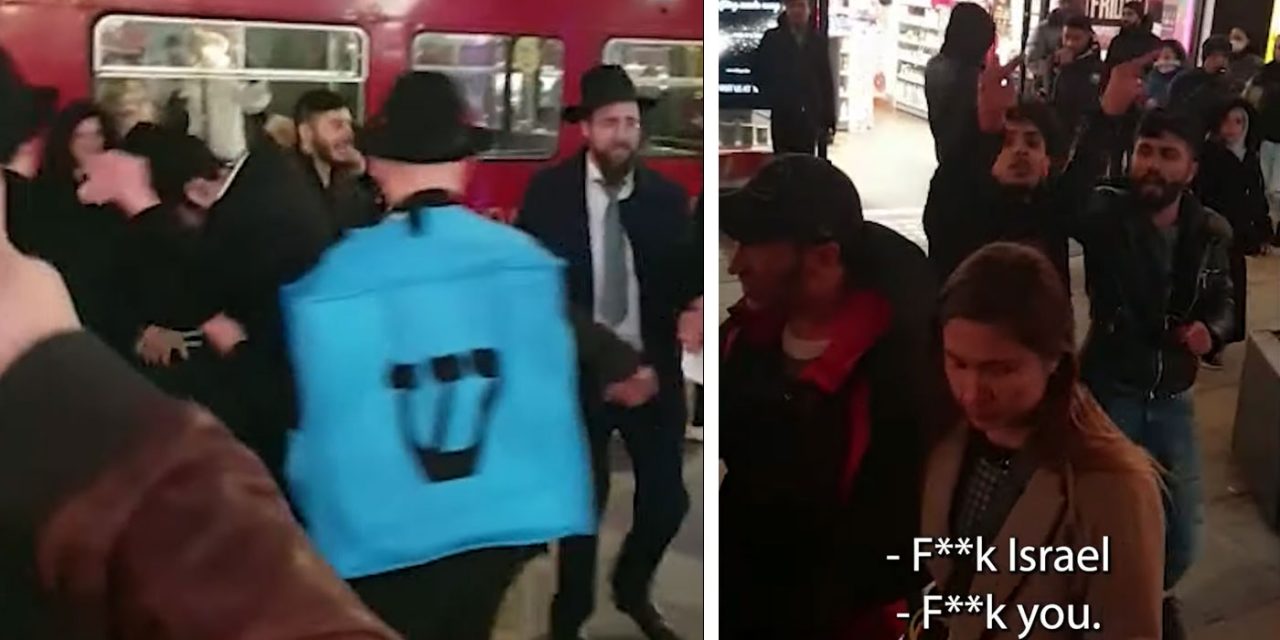 New video footage has emerged of an anti-Semitic attack by a group of Arabic looking youths in London who threatened Jews and attacked the bus they were on.

The Jewish News, who obtained the footage and interviewed one of the victims, explained that Joanne Order, 31, was the oldest passenger among 20 on an open-top bus, organised by Chabad for Jewish youths to celebrate Hanukkah.

The group are seen in the video footage celebrating Hanukkah, the festival of lights, by waving lights around, singing and dancing as they drive through London. One of the group was dressed as a dreidel.

The party decided to hand out doughnuts to passers-by as they made their way through London, and it was around 7:45pm when they disembarked the bus opposite Primark on Oxford Street that trouble started.

The atmosphere quickly turned ugly, however, when around six “Arabic looking men” began to aggressively intimidate the group. Joanne told Jewish News: “One of the men, who looked to be in his early 20s, started playing loud music on a speaker. Another stood on a bench and screamed “F*** Israel, f*** Jews’ and I could hear a third voice yell: “Free Palestine!” Some of the female partners of the men tried to hold them back but they were determined to carry on.

“At this point were told to quickly get back on the bus, which is when the attack began to get violent. A metal shopping basket was thrown from the street up into the top deck, which luckily didn’t hit anyone. One of the men banged aggressively on the side of the bus and removed one of the sliding ventilator windows which was ajar. Another stared directly at me, removed his shoe and waved it, which is one of the most insulting things you can do in Middle Eastern culture.”

Joanne added: “One of the men even ran after the bus as it moved on, chasing us down the road. The police had been called by the point and officers came on board a few minutes later to put us all at ease.”

Asked how the young passengers felt during the attack, Joanne said: “There was such fear and distress. My legs were shaking from anger and shock. My 19-year-old cousin was shaking like a leaf. Maybe we should have taken security with us because nobody walking past did anything to help. Then again, why should Jews need security to celebrate Chanukah?”

This is disturbing footage. Racism of any kind will never be tolerated in our society and we will continue to do all we can to root it out. https://t.co/fnC1BoAxUE

Shneor Glitsenstein, director of the Chabad Israeli Centre Golders Green, was also on the party bus. He said: “Let me be clear: on Monday evening we were attacked on the streets of London for being Jewish and celebrating Chanukah. While our bus contained no references to Israel, we were clearly a Jewish group.

“The young men who surrounded us were not engaged in political protest; this was a bigoted antisemitic attack in the heart of London, seen by dozens of others, who stood by silently.”

This latest footage, which clearly identifies some of the perpetrators, has been forwarded to the police. Speaking before the new footage emerged, a Metropolitan Police spokesperson said: “The incident is being treated as a hate crime and officers will be assessing the available evidence to identify any possible lines of enquiry.”

Can you help catch these thugs? Police are urging anyone who recognises the men in the video, or who has any other information, to call police on 101 with the reference 6187/29NOV. Information can also be provided to Crimestoppers on 0800 555 111.