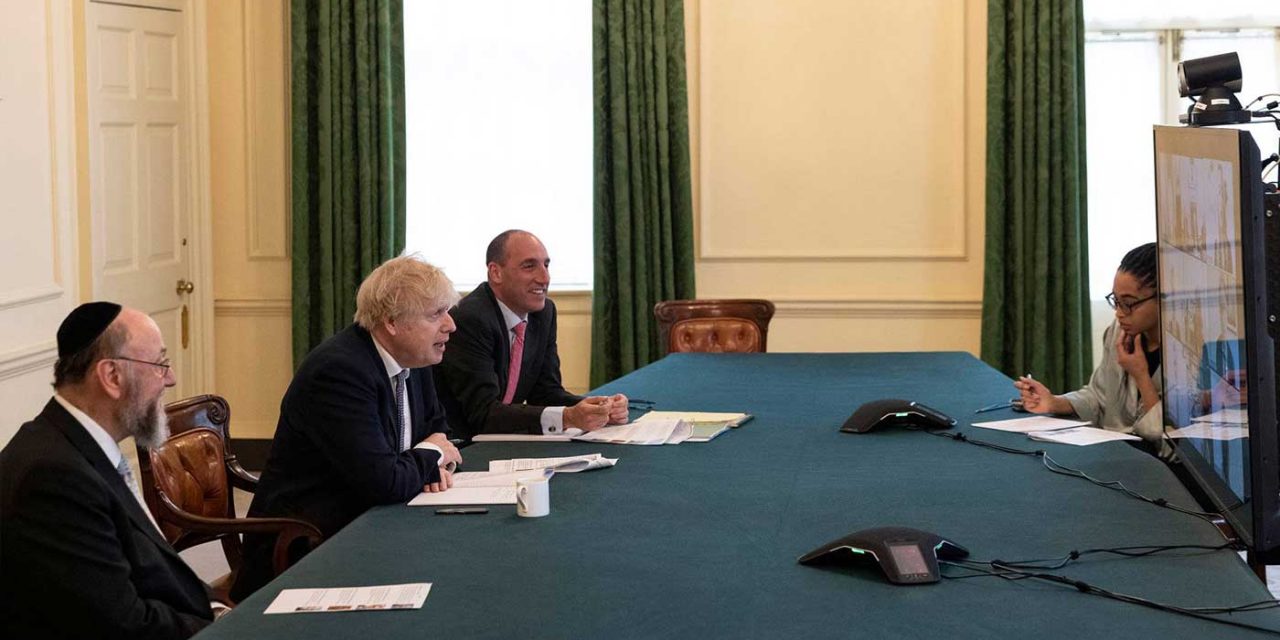 Prime Minister Boris Johnson this week met with leaders of the Jewish community in the UK following a spate of anti-Semitic hate crimes by Palestinian supporters in recent days.

Britain’s Chief Rabbi Ephraim Mirvis was invited to attend in person, meeting with the Prime Minister at 10 Downing Street, while other leaders joined by video call.

Alongside the Chief Rabbi were representatives from the Jewish Leadership Council, the Community Security Trust, Union of Hebrew Congregations, Board of Deputies, Campaign Against Antisemitism and the Government’s independent adviser on antisemitism also attended virtually.

During the meeting the prime minister said: “Whatever the situation is in the Middle East, there is no excuse for the importing of prejudice to the streets of our country. In any form. The recent signs of anti-Semitism, such as the assault of Rabbi Goodwin, the disgusting parade of vehicles chanting hate speech through the streets of London, is intolerable and I take deep, deep exception.”

He continued, “I condemn antisemitism in all its forms and I stand totally with our Jewish community. This is something that has always been the way, and often goes unsaid, but I feel it needs to be heard clearly. There is no place for anti-Semitism in the United Kingdom. We must call it out, and be continuously vigilant and emphatic.”

Chief Rabbi Ephraim Mirvis expressed his thanks to the PM for convening the meeting and said he was “worried about the increase in antisemitism in the United Kingdom” and that “what we are seeing right now is unprecedented”.

He added: “The community is determined to stop it in its tracks and are encouraged and grateful for the Government’s help.”

According to the Jewish News, the prime minister pledged the Government’s support to help all victims of antisemitism as well as strengthen interfaith dialogue and the ties between the Government and all the religious communities of the UK.

Board of Deputies President Mary van der Zyl thanked the government for their support and used the opportunity to raise the issue of full proscription of Hamas.

Shamefully, the UK has only proscribed the military wing of Hamas and not the political wing, similar to how we had previously banned Hezbollah before a full proscription was enforced.

Much of the anti-Semitism being expressed in recent days has come from pro-Palestinian activists and supporters. There are likely those expressing support for Hamas on British streets who have specifically targeted British Jews. They are expressing the same anti-Semitic hatred of the terror group and anything the UK government can do to stamp this out, such as fully banning Hamas, should be undertaken.