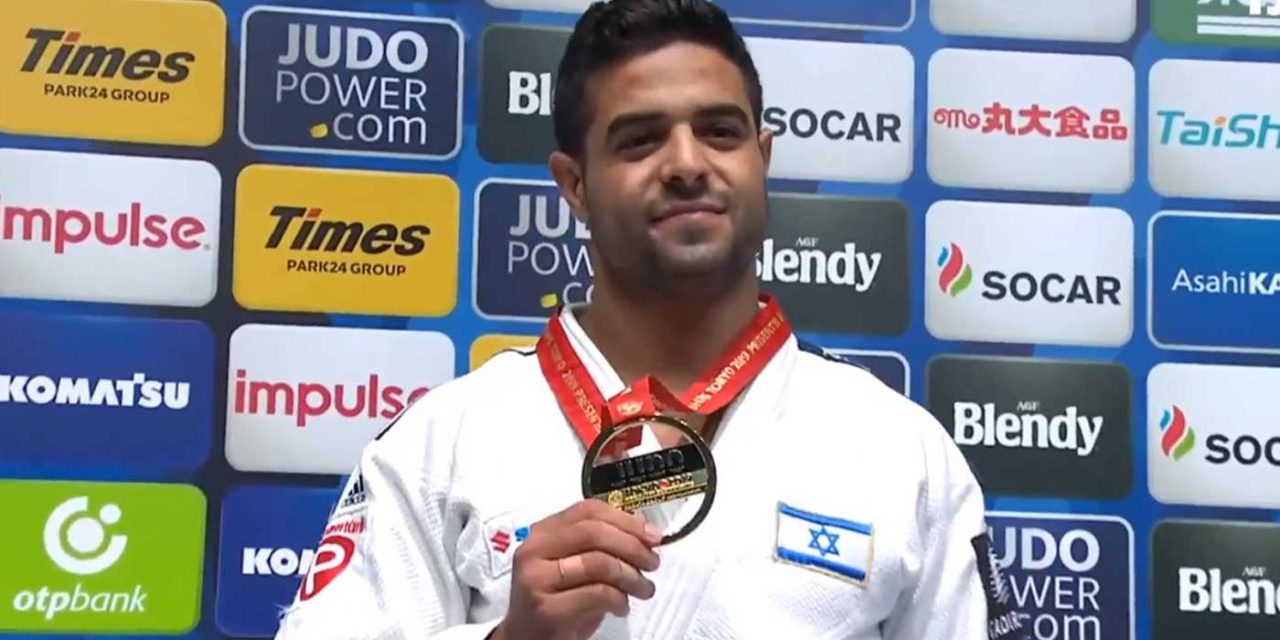 Netanya-born judoka Sagi Muki won the gold medal at the Judo World Championships in Tokyo on Wednesday – the first time an Israeli male judoka has received this honour.

Muki had to overcome anti-Semitism on his way to victory, with Mohammed Abdulaal from Egypt refusing to shake Muki’s hand after their Semi-Final bout. To prove it was only the Israeli who he refused to shake hands with, Abdulaal shook hands with every other opponent he faced, including the Canadian opponent he lost to in the bronze medal fight. It was for the best that he lost that as it would have caused more awkwardness on the podium had he refused to congratulate Muki there. However, all the athletes on the podium showed great respect for one another, including the Israeli.

Please share! Today, an Egyptian judoka REFUSED to shake the hands of his Israeli opponent.To prove this was driven by anti-Semitism, the Egyptian lost his next bout but shakes the hand of his Canadian opponent. This is just minutes later!Despite the hate, Sagi Muki, the Israeli judoka, went on to win the gold medal for Israel!Please share! Sport should NOT be a place where anti-Semitic hatred is tolerated. #AntiSemitism #Israel #LoveIsrael #SagiMuki #Judo #PrayforIsrael #DefendIsrael #CUFI #ChristiansAgainstAntiSemitism

Posted by Christians United for Israel – UK on Wednesday, 28 August 2019

Muki sang along with passion as Israel’s national anthem “Hatikva” played in the Tokyo stadium as the Israeli flag was raised.

On his way to the top, Muki, 27, faced six opponents, gaining the upper hand on all of them, winning the gold medal in the under 81 kg. category.

This is Muki’s first medal at the World Championships and he is the first male Israeli to win the tournament.

Muki has won other tournaments, including the European gold medal in 2015 and again in 2018. He also finished fifth in the international competition in Baku, Azerbaijan in 2016.

Prime Minister Benjamin Netanyahu congratulated Muki on Twitter along with a photo of the athlete showing Netanyahu a medal he received from a different event. “World champion!” the prime minister wrote. “Wonderful Sagi Muki – bringing a lot of respect and pride to all of us.”

Netanyahu held a video chat with Muki and congratulated him on his achievement.

“You’ve proven what I always say, that thanks to talented wonderful people such as yourself we turned Israel into a judo powerhouse,” Netanyahu said.

Netanyahu invited Muki to come to the Prime Minister’s Office with the medal.

“But a huge medal,” Netanyahu joked, as he was speaking with the Israeli world champion.