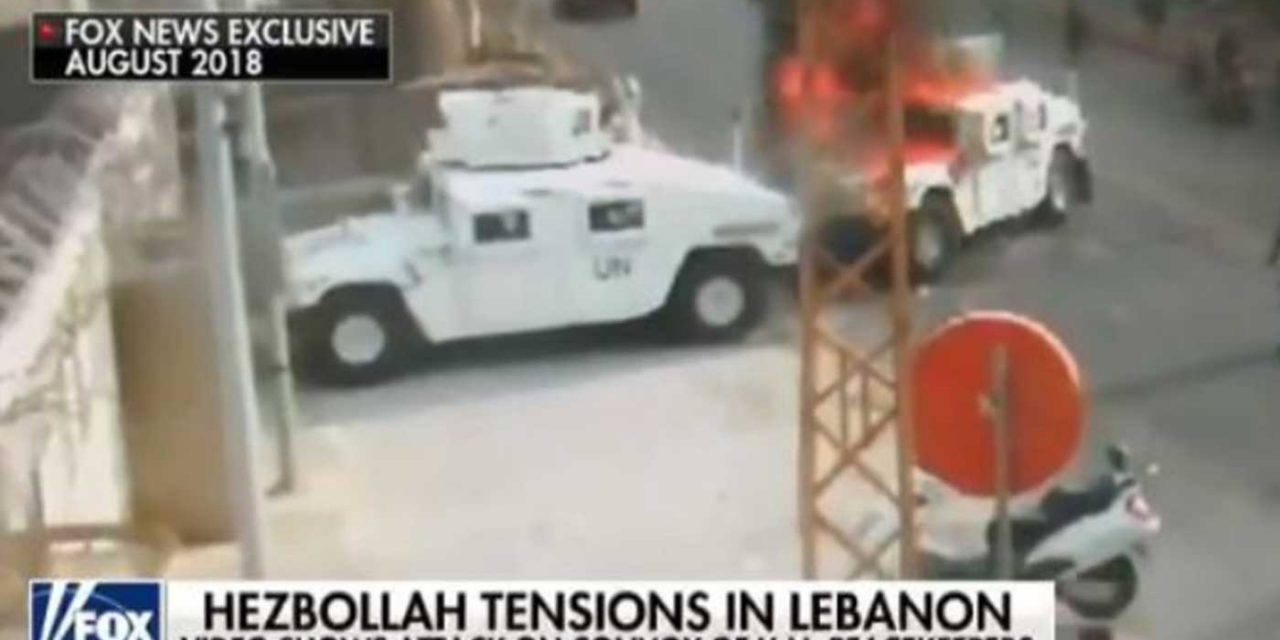 A video broadcast on Wednesday shows what appear to be Hezbollah members physically attacking members of the UN peacekeeping force in southern Lebanon, UNIFIL.

In the video aired by Fox News, shot last year, two UNIFIL patrol vehicles are seen outside the force’s headquarters. They are quickly surrounded by over a dozen men who smash the windows and set one vehicle on fire. UNIFIL members were reportedly beaten and threatened with weapons as well.

The Fox report stated that intelligence community sources blamed the violence on Hezbollah.

Hezbollah is the Iranian controlled terrorist organisation which now effectively runs the Lebanese government after being elected into power. This attack took place last year is very telling of the intentions of Iran, who often attack to test reactions. If the reaction is appeasement, this empowers Iran to act as it pleases. As you will see from the video, the peacekeepers were outside their own base. They were armed, yet the terrorists disarmed them, threatened them with their own weapons and humiliated them. The UN forces showed weakness, thus empowering Iran to act how it pleases in Lebanon and threaten Israel’s borders.

Since this time we have seen repeated actions from Hezbollah terrorists in Lebanon.

A recent incident was just a few weeks ago when Hezbollah terrorists started forest fires on Israel’s border. These fires burned into Israeli territory and started to spread to an Israeli town before being put out by Israeli firefighters. UNIFIL (the UN peacekeeping force) was present, in similar vehicles to this video, and watched the terrorists carry out their arson attack.

The UN forces did not intervene. They did not try to stop the terrorists or help put the fire out. They also did not appear to communicate the threat to Israel. They simply watched on powerless. This shows that Hezbollah is able to act as it pleases with the UN doing nothing to counter it. It will be interesting to see tomorrow if the UN gives more power to the peacekeepers to keep the peace or if they will be as ineffective as they currently appear to be.

Tony Badran of the Foundation for Defense of Democracies (FDD) think tank said that the attack was “clearly not a spontaneous act by local civilians, this is clearly a Hezbollah-coordinated operation.”

“The fact that they did it right outside the UNIFIL headquarters is all you need to know,” he added.

Dani Dayan, Israel’s consul general in New York, tweeted of the video, “This was a #MustWatch. The whole truth about Hezbollah criminal terrorist behavior and about UNIFIL weakness in one short shocking video. The UN must guarantee UNIFIL’s ability to fulfill its mission.”

MUST WATCH: New footage has come to light of UN peacekeepers outside the UN headquarters in southern Lebanon last year being attacked by around 20 people, believed to be Hezbollah terrorists.Hezbollah is an Iranian terror proxy. They endanger civilians in Lebanon and Israel. They are even a danger to UN personnel. #OperationMordecai #Iran #Hezbollah

Posted by Christians United for Israel – UK on Thursday, 29 August 2019