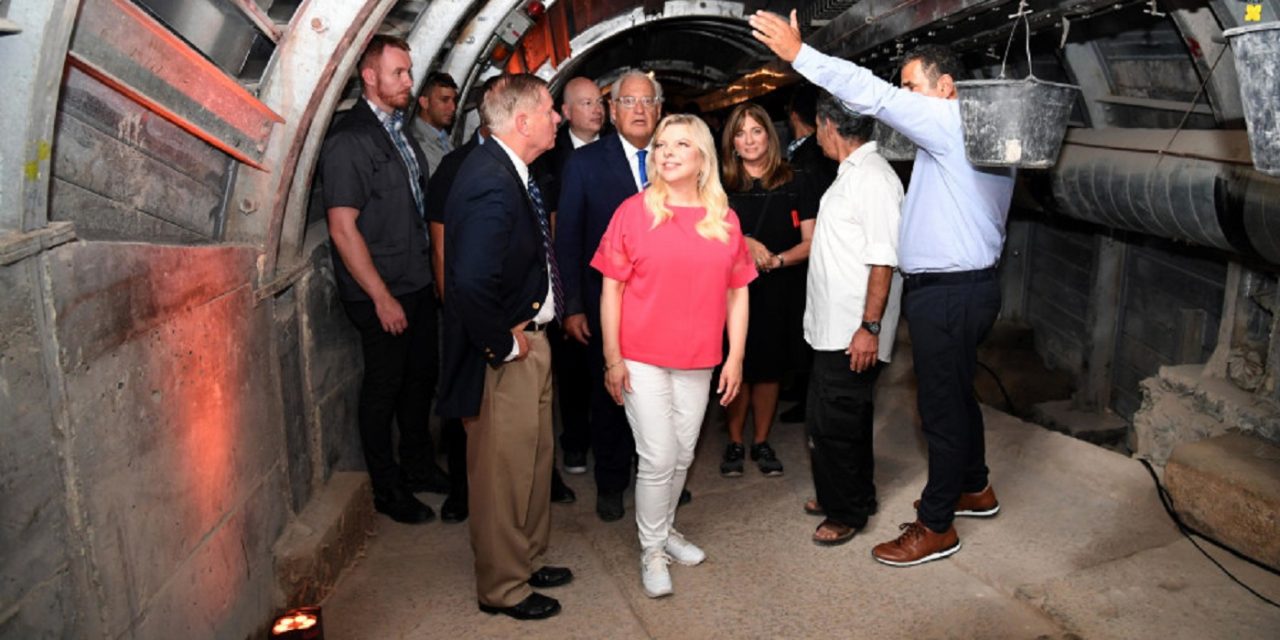 Israel officially opened a stairway, known as “Pilgrim’s Road,” the road which Jesus would have walked on to reach the Second Temple. This is another discovery in Jerusalem with the significance of “biblical proportions” to billions of people around the world, especially for Judeo-Christian visitors to the Holy Land.

The City of David Foundation unveiled the 2,000-year-old main thoroughfare from Roman-era Jerusalem that served pilgrims ascending to the ancient Jewish Temple from the Pool of Siloam built by King Hezekiah. Until recently, it was hidden under a potato field and discovered by accident in 2004 after a pipe burst.

CUFI was given exclusive access to the road last year, long before it was able to viewed by the public, with CUFI Founder Pastor Hagee and The Watchman’s Eric Staklebeck able to record inside the road, giving Scripture and proof that Jerusalem belongs to the Jewish people.

The Bible declares it. God commands it. Nothing man does will ever change this truth and as the Bible declares, “If men will not praise and recognise Me, the very rocks will cry out…” (Luke 19:40)

Almost all of the Jewish pilgrims would have entered the city on this road. It is a road that Jesus almost certainly used during the Second Temple period, alongside many of the famous Jewish scholars and leaders of that period.

“This place is the heart of the Jewish people, and is like the blood that courses through our veins,” Doron Spielman, director of Elad, said.

Here is one example: Hillel and Shammai – the famous first-century scholars who figure prominently in the Mishna – debate at what stage in a child’s development his father is obligated to include him in the pilgrimage. Shammai, the stringent one, says that a child should be included as long as he can sit on his father’s shoulders. Hillel says only if the child is able to walk up the 750-meter road need he be included.

Walking the road – as of now archaeologists have excavated about 250 meters of it – you can imagine the throngs of people parading on it 2,000 years ago. Young boys walking next to their parents. Girls on their fathers’ shoulders. So far, only some of the stores that once lined the road have been partially uncovered, but with imagination you can hear the bartering that took place here – people trading leather for fur, seeds for honey, coins for wine.

For example, archaeologists found a set of stairs in the middle of the road alongside one of the ancient shops. But the staircase doesn’t go anywhere. It ends in a platform. When Ir David checked, though, it found just one other similar set of stairs – in Rome, where it was used as something like a Hyde Park-style Speakers’ Corner. Basically, this was a place where people could make announcements and deliver speeches to the pilgrims as they climbed the road to the Temple.

Then archaeologists found beside the stairs the burned remains of a male palm tree, one that doesn’t give fruit. Why would there be a non-fruit producing tree right there on the road? To provide shade for the speakers.

“To understand Jerusalem, you need to stand here,” Spielman said. “We were exiled in 70 [CE] and prayed three times a day and established a state. The last breath of Jews was here, beneath us.”

Spielman mentioned the thousands of coins the archaeologists uncovered engraved with the words “Free Zion.”

“This was the battle cry during the fight against the Romans,” he explained. “They made coins and not arrowheads because they knew they could not beat Rome, but they made the coins so there would be something left for the people who would one day come back.”

Thankfully this ancient road is now available for the public to view so you truly can walk where Jesus walked.

U.S. Ambassador to Israel David Friedman and U.S. Mideast peace envoy Jason Greenblatt were invited to place the final sledgehammer blows on a wall covering the tunnel entrance to the Pilgrimage Road in the City of David.

Having US envoys present for this unearthing help to solidify US recognition of Israel’s sovereignty over the entirety of Jerusalem.

It may surprise some people to learn this, but the UK government’s policy at this point in time is to support a Two-State Solution with Jerusalem as either a shared capital for the Israelis and Palestinians or that East Jerusalem will be the Palestinian capital and West Jerusalem will be the capital of Israel. This is a view that we disagree with and are prayerful that the UK will change its policy on this issue.

The UK should not have a foreign policy that splits Jerusalem. After all, the holiest places in Judaism and Christianity are located in East Jerusalem.

All the main Christian sites are located there also, such as the Garden of Gethsemane and the Garden Tomb, where Jesus is believed to have been buried, along with the Church of the Holy Sepulchre, all of these places are located in East Jerusalem.

Despite this great discovery, media headlines have attempted labelled the discovery as being “under Palestinian homes”, in an attempt to show that Israel is (in their minds) encroaching on Palestinian territory, with some calling Israel’s actions “illegal”. The reality is that this ancient tunnel is a part of Jewish history and it is right for Israel to preserve it.

PA claims our attendance at this historic event supports “Judaization” of Jerusalem/is an act of hostility vs. Palestinians. Ludicrous. We can’t “Judaize” what history/archeology show. We can acknowledge it & you can stop pretending it isn’t true! Peace can only be built on truth https://t.co/PmcahhzvIz

Palestinians who pray on the Temple Mount (which they claim as al-Haram Sharif, the third holiest site to Muslims) they actually turn their backs to the golden dome and to Jerusalem and instead pray towards Mecca, the capital of Islam.

President Donald Trump recognised Jerusalem as Israel’s capital in 2017. There has been a lot of criticism to this tradition. Even this week, news websites labelled Trump’s move as “breaking decades-long US foreign policy”. This is a lie. Fake news.

In 1995, Congress passed the Jerusalem Embassy and Relocation Act, which recognised Jerusalem as the capital of Israel and committed to moving the US embassy from Tel Aviv to Jerusalem no later than May 31, 1999. For years, every American president, Bill Clinton, George W Bush and Barak Obama, signed a presidential waiver every six months. They defied Congress and went against US foreign policy.

It came to President Donald Trump to fix this problem. Trump simply did not sign a waiver and allowed the law to be passed, thus enacting decades-long US foreign policy. Something his predecessors failed to do.

This latest discovery helps solidify the truth about Jerusalem and that President Trump was right.

“Whether there was ever any doubt about the accuracy, the wisdom, the propriety of [US] President [Donald] Trump recognizing Jerusalem as the capital of Israel, I certainly think this lays all doubts to rest,” US Ambassador Freidman said before he helped to smash down the symbolically built wall to officially open “Pilgrimage Road”.

‘An appointed time’ – A message for the Feast of Tabernacles

The Feast of Tabernacles (Sukkot) is one of the Biblical feasts described as 'moed' meaning an 'appointed time' in Hebrew, in which the Jewish people remember God's provision during 40...
Read More

Awaken! – A message for the Feast of Trumpets

The Lord wants to get our attention in these unprecedented days. He wants us to awaken and listen to what He is saying to His people.CUFI’s Alastair Kirk explains the 'Feast of Trumpets'...
Read More