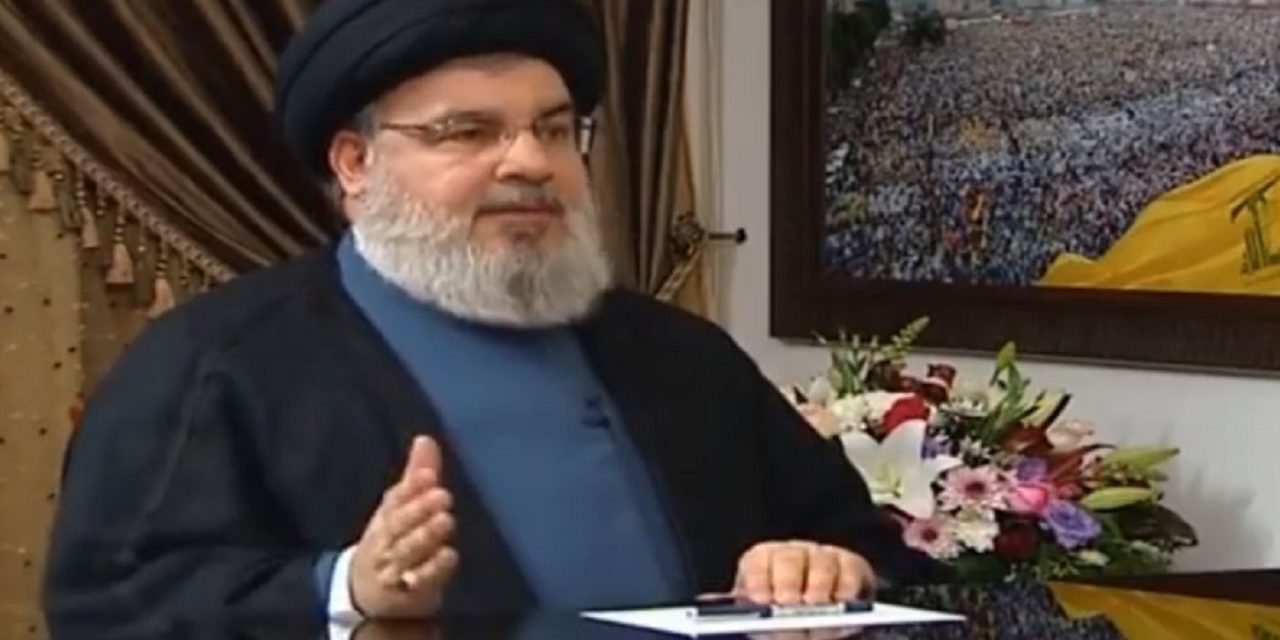 Hezbollah’s secretary general, Hassan Nasrallah, has confirmed he has recently met with Fatah leaders and other Palestinian factions in order to support the “liberation Jerusalem”…and he denies it has anything to do with President Trump’s decision. The leader of the Lebanese-based terror group also said that Iran is directly providing financial aid and weapons to Palestinian groups independent of Hezbollah.

Speaking on Mayadeen TV, in an interview that was broadcast on 3rd January, he explained how  Hezbollah, Fatah, Hamas, Islamic Jihad and other groups are prepared to put aside differences for a new “intifada” and would unite in the event of a large-scale war to “liberate Jerusalem, and not just the Galilee.”

After playing down the situation in Iran, Nasrallah went on to “reassure the public of the resistance axis.”

Nadrallah said, “I [recently] met with the PFLP, the PFLP-GC, the Fath Al-Intifada movement the As-Sa’iqa organization, the PPSF, Hamas, the DFLP, the Islamic Jihad, and the latest meeting was on Saturday with the Fatah movement.”

Giving a clear indication that the various groups were prepared to put differences aside, he continued, “The main issue right now is the intifada within occupied Palestine and the accompanying activity abroad.”

“Whether ‘from the River to the Sea’ or the 1967 borders, whether Jerusalem in its entirety or just East Jerusalem, the refugees, the West Bank borders, negotiations or no negotiations – we put all this aside. We said that the heart of the Palestinian cause, Jerusalem, is being targeted, so let us cooperate. This was the spirit of all the factions.”

When asked by the interviewer whether cooperation mean with demonstrations, Nasrallah replied, “Within occupied Palestine it is about direct confrontation, obviously. We all know what Intifada means.”

Nasrallah also confirmed that an Iran would provide financial and military aid for “the Intifada”.

“From outside Palestine all types of aid are required: demonstrations, media, policies, the rise of the peoples of the region, and even in the outside world – we should all benefit from our ties and our communities there. We talk about media support, political support, financial support… This is very natural.”

“…In the past, the financing came from the Islamic Republic. During what was called the Jerusalem Uprising, financial compensation was given to families of people martyred, wounded, or imprisoned. When a house was demolished as a result of a stabbing operation, for example, the family would get compensation in order to secure alternative housing. This kind of support will continue and increase.”

Denying that Hezbollah are mediators in channelling financial support from Iran to the Palestinians, Nasrallah suggested that Iran provides aid directly.

“The Islamic Republic is proud to fulfill its duty, when it provides aid to the Palestinian resistance factions. It’s not that they need a mediator to avoid the consequences. They are doing it out in the open.”

Nazrallah also clearly stated that support for the “Intifada within Palestine” consists of weapons in addition to financial support and that it has “nothing to do with Trump’s decision to recognise Jerusalem.

“As far as we are concerned, the support in weapons has never stopped. It has nothing to do with Trump’s decision about Jerusalem. The resistance inside Palestine should have the necessary weapons and the necessary military capabilities. This is our unwavering platform. It is not a reaction to a decision here or a diplomatic or political measure there.”

“Our decision about this is final, and the program is working. It depends on the circumstances not on our decision. This is our unwavering policy. The resistance in Palestine needs weapons and capabilities, and whenever we get an opportunity, we do not hesitate.

Nazrallah also gave indication that a war with Lebanon would not only be “against Hezbollah” and that the terror group is setting sights on “beyond the Galilee”.

“It is the responsibility of the resistance axis – countries, movements, peoples, and factions – to prepare itself. We have nothing to lose by preparing ourselves, so we won’t be taken by surprise. Our minimal duty is to prepare so that if the day comes when a war breaks out, we will be able to turn this war from a historic threat to a historic opportunity.”

Nasrallah continued, “I said to the mujahideen of the resistance: Prepare yourselves for a day when you may be asked by the command of the resistance to enter the Galilee, or to liberate it. As for what lies beyond the Galilee, it is connected to the general idea. If a large-scale war erupts in the region, anything will be possible.