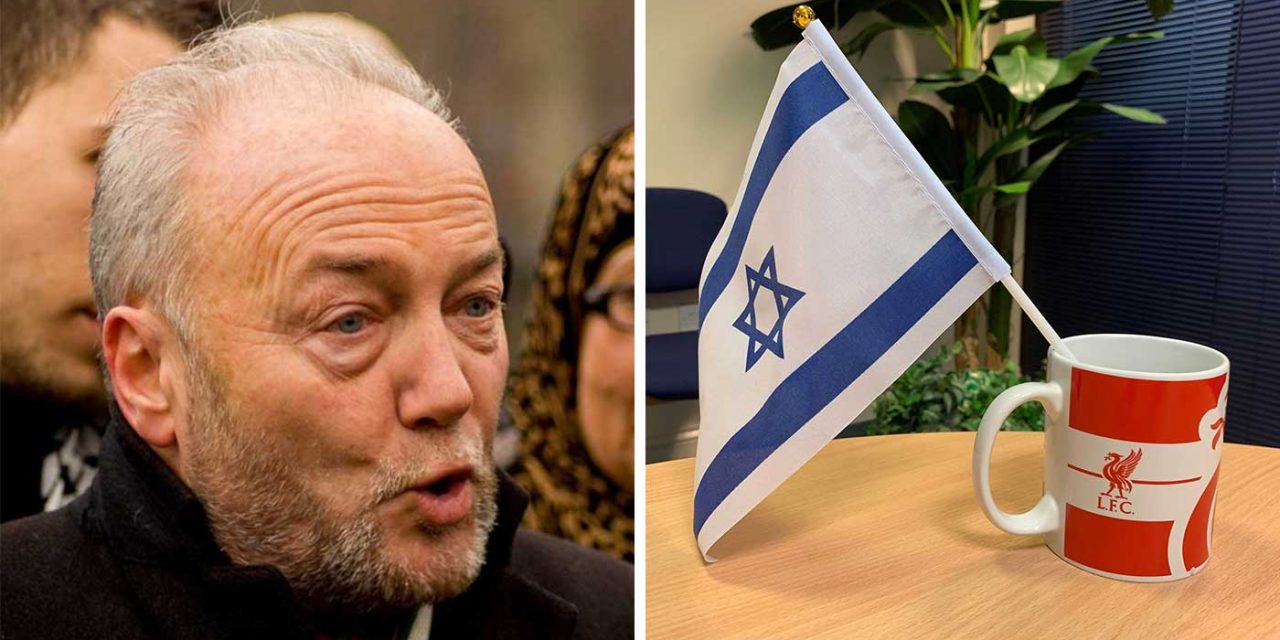 On Sunday, Mr Galloway tweeted his “congratulations” to Liverpool FC on beating Spurs 2-0 in Madrid on Saturday, saying: “Congratulations to the great people of Liverpool to the memory of the socialist miner Bill Shankley to the fallen 96 to those who fought for justice for them and to the Liverpool dockers. No Israel flags on the Cup!”

Galloway was using an anti-Semitic slur based on Tottenham having some Jewish supporters.

Congratulations to the great people of #Liverpool to the memory of the socialist miner #BillShankley to the fallen #96 to those who fought for justice for them and to the Liverpool dockers. No #Israël flags on the Cup!

The tweet sparked anger amongst Spurs fans and Liverpool fans alike. Hundreds of people responded to the tweet saying “this is anti-Semitism” and calling him “racist” with another telling him he “walks alone”, a play on Liverpool’s anthem “You’ll Never Walk Alone”.

Liverpool’s head of club and supporter liaison, Tony Barrett, wrote back: “Please don’t include Liverpool Football Club in this b******t.

“It’s a club of all flags, all religions, all nations and none.”

Tottenham Hotspur put out a club statement to Sky Sports News saying it was “blatant antisemitism”.

“It’s astounding in this day and age to read such blatant antisemitism published on a social platform by someone who is still afforded air time on a radio station on which he has previously broken broadcast impartiality rules,” the club said.

On Monday morning, Talk Radio confirmed they had terminated George Galloway’s weekly show with immediate effect, saying, “as a fair and balanced news provider, talkRADIO does not tolerate anti-semitic views.”

As a fair and balanced news provider, talkRADIO does not tolerate anti-semitic views. pic.twitter.com/upDUaNPoi0

Mr Galloway said he had been given a “red card” from TalkRadio, and said: “I’ve just been sacked by TalkRadio. See you in court guys. #Palestine #Moats Long live Palestine”.

He added: “The Mother of All Talkshows – Unleashed -will not be silenced. Stay tuned for further details.

George Galloway will shamefully use every opportunity to spread anti-Semitic vitriol against Israel, even using an unrelated game of football spread his message of hate.

Israel was not a factor in the Champions League final and there are no doubt pro-Israel and anti-Israel fans on both sides. However, one of the CUFI writers is a Liverpool fan, and could not resist putting an Israeli flag in the cup below.

#GeorgeGalloway says "No #Israel flags on the Cup!" in anti-Semitic tweet. @georgegalloway : here is one Israel flag in a #Liverpool cup. ⬇️

Say no to #Antisemitism pic.twitter.com/Xy60aDrgm7

George Galloway declares Israel “should be no more” at IHRC event