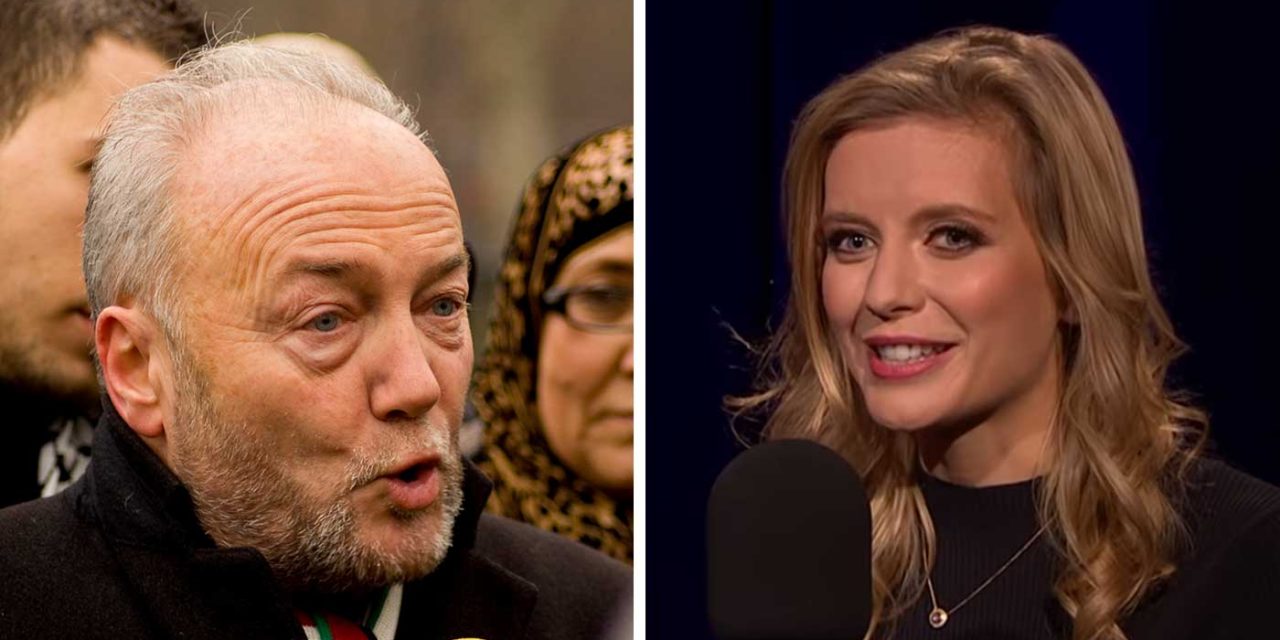 Countdown presenter, Rachel Riley, has been taking on anti-Semites on Twitter and speaking out against those who spout hatred against Jews. In particular, she put George Galloway in his place after he attacked the star.

Rachel Riley is best known as being a brilliant mathematician or “the numbers lady” on Countdown, but in recent months she has been using her social media account to highlight and counter anti-Semitism. As a result, the star has faced a flurry of abuse, including vile anti-Semitic comments.

This week she chose to point out some anti-Semitism she had received. Whenever she does this it usually results in numerous more anti-Semitic comments being levelled at the star. This occasion was no exception. One of the haters to attack the star on Twitter was George Galloway, the ardent anti-Israel campaigner who declared last year that Israel “should be no more“.

Rachel Riley tweeted about a number of people who “promote Antisemitism”, such as Ken Loach, the movie director who is extremely anti-Israel, Aaron Bastani, a pro-Corbyn mouthpiece, and Noam Chomsky, a Jewish writer and intellectual.

Galloway took exception to Chomsky being on this list and then went on full attack mode against the Countdown star. It is important to note that both Rachel Riley and Noam Chomsky are both Jewish.

To all messaging outrage after recent thread re Antisemitism, not because of the AS I highlighted, but because I said one of their heroes (Chomsky) promoted Antisemitism.

Here he is, supporting a Holocaust denier.

If that doesn’t promote Antisemitism, I don’t know what does. pic.twitter.com/eS288Sgv00

You will note from Riley’s tweet that she did not call Chomsky “an anti-Semite”. She said that he did “promote” anti-Semitism. This is evidenced when Riley tweeted how Chomsky defended a Holocaust denier and promoted his thesis which tried to dismiss the Holocaust as a myth that “never took place”.

Galloway, however, does not appear care for details. He also doesn’t seem to care that Riley has been the victim of legitimate anti-Semitism. He didn’t say, “I’m sorry you’re being attacked in this way”, or anything to suggest he wants to tackle anti-Semitism. He simply wanted to defend his views and silence those who oppose his views, in this case, Rachel Riley.

When “national treasure”, Stephen Fry, stood up for Riley, tweeting “I stand with you, Rachel x”, in which he was referring to her stand against anti-Semitism, not her Chomsky comments, Galloway tweeted back that it was “Dumbfounding” for Fry to do so, because according to Galloway, Riley “calls Chomsky… an anti-Semite and slanders half the Labour Party”.

As explained above, Riley isn’t calling Chomsky an anti-Semite but has proven that he has promoted those with anti-Semitic views. Therefore, Chomsky has “promoted Antisemitism”.

Galloway’s comment that Riley has slandered “half the Labour Party” appears to be Galloway misreading Riley’s tweet (or adding 2 + 2 and getting 7 so that he can further slander the star). What Riley actually said is that it was “no surprise” that the person who supported the people above was “pro-Corbyn”. And it is no longer surprising that those who spout anti-Semitism against her are more often than not a supporter of the Labour leader.

This observation is not wrong. Jeremy Corbyn does seem to attract people with anti-Semitic views. Does that mean that every Corbyn supporter is anti-Semitic? No, but many of those attacking Riley are both spouting anti-Semitism and supporting Corbyn.

Galloway did not end it with one tweet, he continued this assault, retweeting other people who attacked Riley. One retweet of Galloways is from someone saying Riley has a “complete lack of credentials” to talk about anti-Semitism. Despite the fact she herself is Jewish and has experienced real anti-Semitism. The fact that she couldn’t answer some questions on Israel in an interview doesn’t prove anything and surely to question her “credentials” is itself anti-Semitic.

Unfortunately, this is the way people like Galloway operate. They will not address the real issue, will divert by pinpointing errors and then repeatedly hammer away at their point until their victim is bullied into submisison. Hopefully Rachel Riley will not be cowed into silence by this thuglike behaviour, and it doesn’t seem she will be.

Branding Galloway a “vile Antisemite”, Riley told him to “go away” (in some rather colourful language). The tweet, which we won’t share here, has more than 27,000 likes at the time of writing. It seems many more people wish that George Gallow would… “go away”.

Riley thanked fans for their support after she was attacked online for sharing a video which condemned anti-Semitism in football.

“I’m hoping I have banked up enough credibility with people that know me for silly words and putting up pictures of cats and dogs to know this is a serious thing for me,” she said. “It needs a bit of light shone on it.”

“You mentioned the abuse but we’ve had so much support,” Riley continued.

“I can’t thank people enough for seeing through the lies. The attempts to discredit are elaborate.”

The presenter also revealed that she would not be attending this year’s National Television Awards, as she has decided to attend an anti-Semitism event instead.

“I could choose between the NTAs, a Manchester United event or going to the government to speak at an anti-Semitism event in the run-up to Holocaust Memorial Day,” she explained.