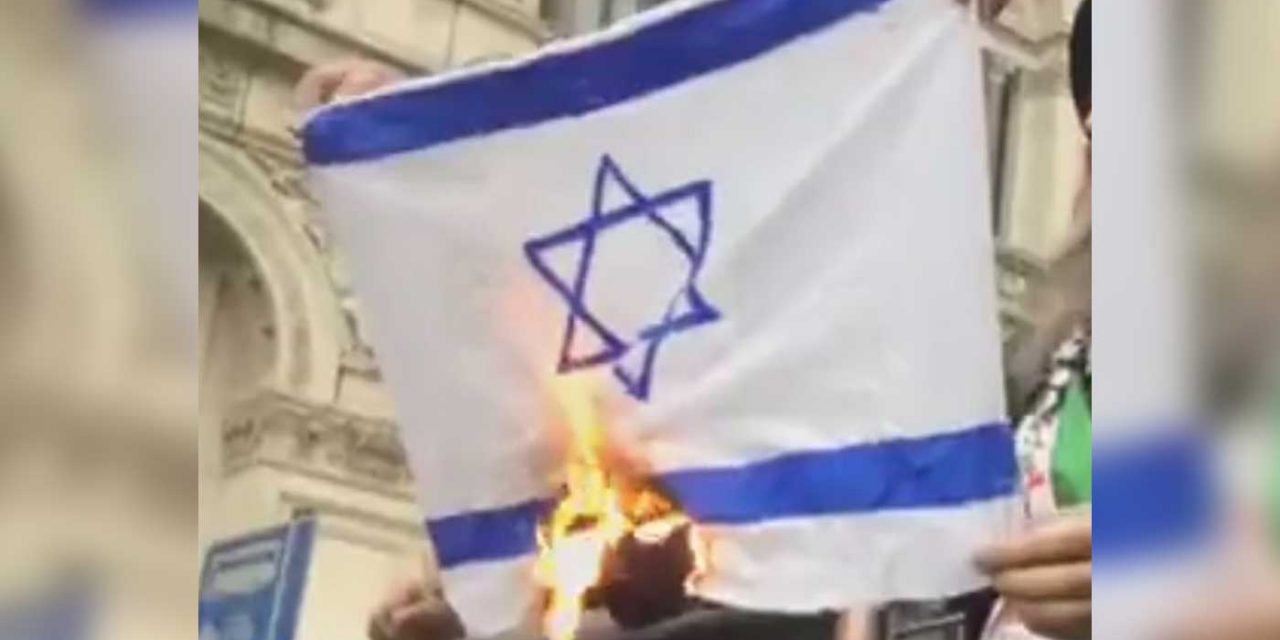 Anti-Israel protesters marched from the Home Office to Whitehall on Sunday for the annual Iran-backed al Quds rally, which saw at least two Israeli flags burned outside Downing Street.

The march, which in previous years has stoked controversy for demonstrating support for Hezbollah and for anti-Semitic speeches, was this year prevented from waving Hezbollah’s flag after the terror group was banned in full by the UK government earlier this year.

One of the demo’s organisers, wearing a jacket marked Legal Adviser, was clutching the flag on a pole hidden from Metropolitan Police officers as it was moved along on the ground to the front of the march.

The flag was then set alight and handed to members of anti-Zionist fringe group Neturei Karta UK who held it aloft to loud cheers as it burned.

Another flag was seen being burned by protesters in the crowd.

This year’s protesters marched under a yellow banner marked “Victory to the resistance”.

“There’s a guy who’s just been suspended from the Labour Party for saying the Israeli embassy is behind the whole wave of false, phoney, fake, malicious antisemitism allegations,” he told the crowd – an apparent reference to Pete Willsman, the National Executive Committee member who was suspended on Friday.

“It’s obvious. They don’t hide it. The Israeli embassy does it. They have workshops around the country where all the local Zios get together.

“Christians and Muslims and Jews; they all get together, the Zios. Because there are some of each. They plot how to smear those of us who stand up for the Palestinian people.

Among the placards spotted, one carried the words: “From the river to the sea, single democratic state: Palestine, the only just solution.”

Another sign read “Zionism = Racism Boycott Israel”, while some called for an end to the “Gaza genocide”.

The Al Quds march is an anti-Semitic hate fest

The anti-Semitic “Al-Quds March” – an Iranian-backed rally that calls for the “liberation of Jerusalem” – returned to the streets of central London on Sunday in what was the first occasion since the formal banning of Hezbollah in the UK.

Christians United for Israel UK’s Executive Director, Des Starritt, said prior to the rally, “The al-Quds’s Day march is an anti-Semitic hate-fest known for advocating the destruction of Israel. London’s march has traditionally expressed support for Hezbollah and has no place on the streets of London.”

“We welcome the total ban of Hezbollah introduced earlier this year by the UK government that will make it more difficult for that support to be outwardly expressed. I hope that the Met police will now use these new powers to crack down on any visible or verbal support for terror.”

“Further to this, the new international definition of anti-Semitism mandates we take all forms of anti-Semitism seriously. This will once again be put to the test on Sunday, but under no circumstances must any repeat of previous years’ anti-Semitism be tolerated.”