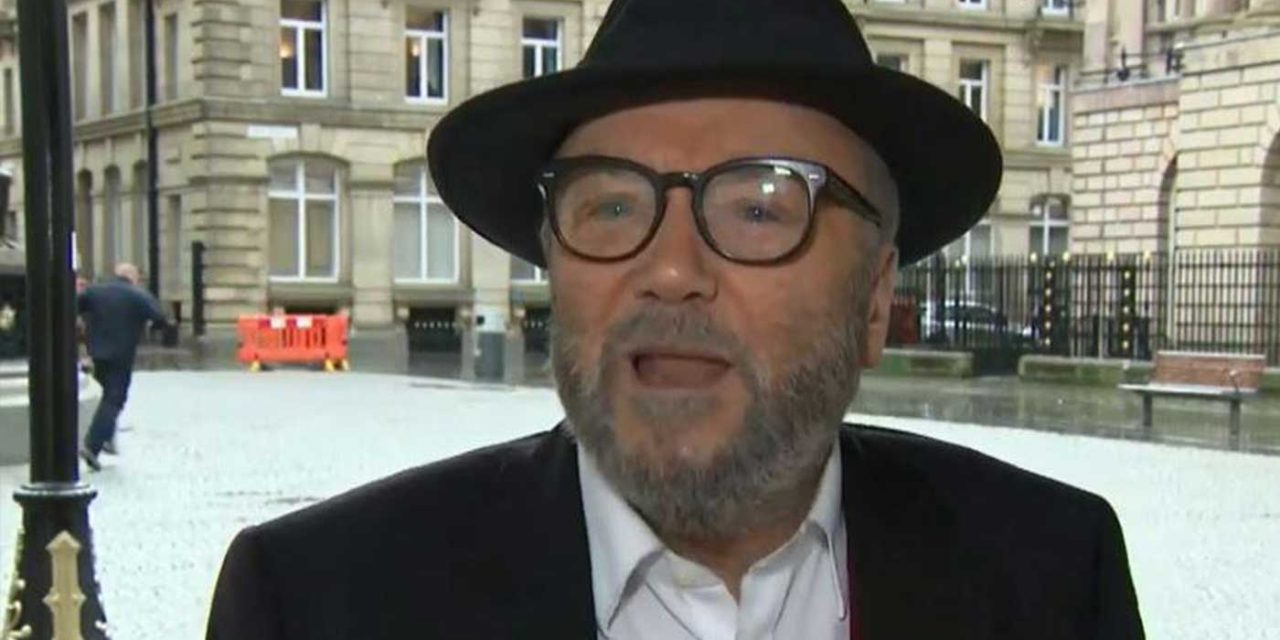 George Galloway has once again shamed himself by accusing the media and others who highlight anti-Semitism in Labour as using the tactics of chief Nazi propagandist and senior advocate for the Holocaust, Joseph Goebbels.

The disgraced former MP made his comments when talking about his desire to return to the Labour party on Sky News this morning. Interestingly, Galloway chose to single out the only Jewish MP who left Labour, Luciana Berger, visiting her constituency ostensibly to talk to residents and spread these smears.

Mr Galloway told Sky News: “I think with the Blairites walking out the door hurling their slander at Corbyn and the Labour leadership, it’s really a black op that’s going on here… I’ve been listening to your show and others all morning, it’s pure Goebellian propaganda, if you repeat a lie often enough, some people might believe that.”

Mr Galloway was challenged on his “Goebellian propaganda” comment by the presenter, Niall Patterson, who said: “We just mentioned Luciana Berger. Do you think it’s entirely appropriate to talk about Goebellian propaganda where we’ve got a Jewish Labour MP leaving because of antisemitism?”

Mr Galloway responded: “I don’t believe she’s leaving because of antisemitism. I believe you want people to believe that, and the Goebbels is you, and the Times and the other organs that are pumping out this foul slander against the Labour party and knowing that it’s untrue.”

He went on saying, “It’s all a lie. Corbyn is not anti-Semitic. Not a fibre, not an atom, not a molecule of his mind or body could be so described. That is the Goebellian lie.”

"Corbyn is not antisemitic."

George Galloway says the criticism against @jeremycorbyn is a "Black Op" and adds that it's a "Goebellian lie" to suggest the Labour leader is antisemitic.

Joseph Goebbels was a German Nazi politician and Reich Minister of Propaganda of Nazi Germany from 1933 to 1945. Goebbels was one of Adolf Hitler’s close associates and most devoted followers and was known for his skills in public speaking and his deep, virulent antisemitism, which was evident in his publicly voiced views. He advocated progressively harsher discrimination, including the extermination of the Jews in the Holocaust.

The list of things Jeremy Corbyn has done to show his support for anti-Semitic terrorists is long. There is no doubt in our mind that Corbyn is both anti-Israel but also anti-Semitic and it appears that sentiment is growing in the UK.

Last week a YouGov poll revealed that one third of Britain’s voting public believe Corbyn is anti-Semitic. Here are some of the findings of that poll:

Only four percent of the UK voting public think the Labour leader has been “very competent” in his handling of the situation. This clearly highlights that his party’s narrative of Corbyn being “anti-racist” and that the party has no problem with Jews is not working on the public. And Galloway will do little to dispel the publics fears.

The Jewish community has long been speaking out against Jeremy Corbyn for his anti-Semitism and the anti-Semitism within his party. To claim that Jews, who suffered the most at the hands of the Nazis, are using Nazi tactics to highlight a real issue is a new low for George Galloway. He knows exactly what he is doing.