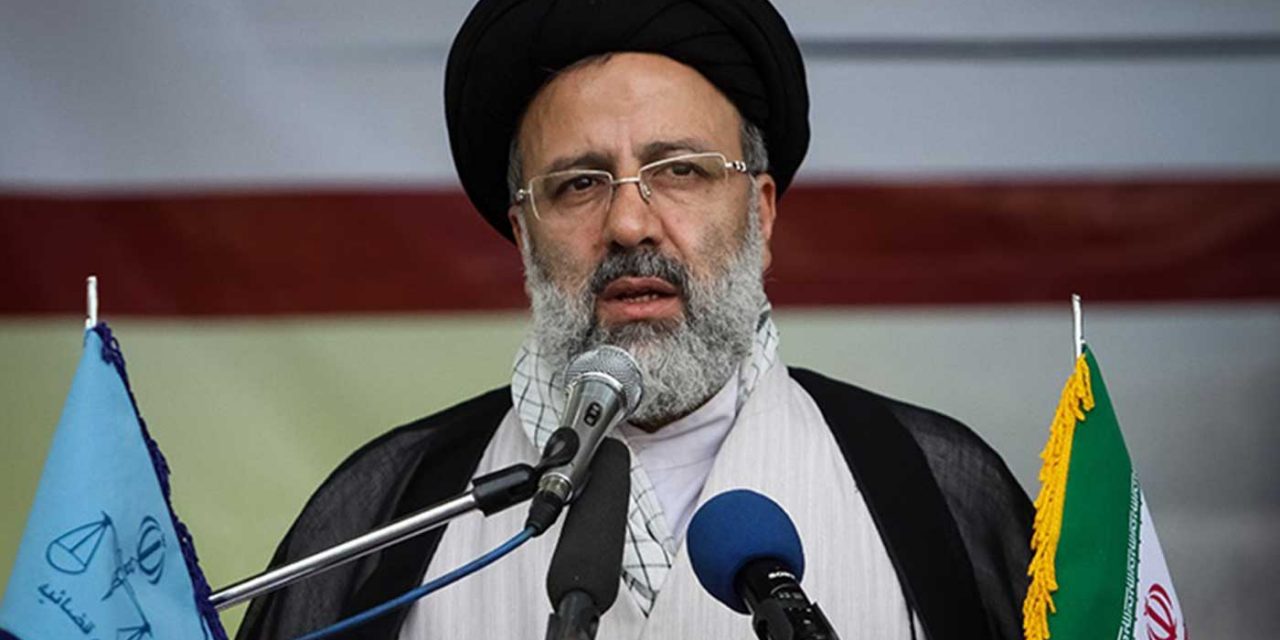 The European Union has been criticized after sending an official to Iran for the swearing-in ceremony of the country’s extremist new president Ebrahim Raisi.

Raisi is accused of putting thousands of innocent Iranians to death simply because they opposed the regime. The courts he oversees have put women in prison for over 20 years simply because they took of their hijab in peaceful protest. He is beyond extreme in his views and actions.

Known as the “Executioner of Tehran”, Raisi began his career as a junior prosecutor in the immediate aftermath of the 1979 Islamic Revolution, which brought Iran’s Shia clerical caste to power.

In 1988, he also sat on an official four-member ‘death panel’ that signed off on the extrajudicial executions of hundreds of Iranian leftist prisoners, on the orders of Iran’s then-Supreme Leader Ayatollah Khomeini.

In less than three months in the aftermath of the Iran-Iraq war, around 3,000 political prisoners were hanged and shot by firing squad and buried in mass graves. Next Tuesday an alleged ex-prison official said to have been involved, Hamid Nouri will go on trial for war crimes and murder in Sweden.

It should be noted that the extremist views of Raisi and his past actions are supported by the Iranian regime. He was handpicked for the job of President by Khamenei and a regime that selects such a person cannot be trusted or treated the same as other governments.

Raisi’s election was controversial for a number of reasons. Ayatollah Khamenei, the Supreme Leader of Iran, is the real ruler of the country. He selects the President and they serve his every command. However, every four years the government puts on a show to elect a new president.

This year, there were hundreds of applicants for the position but all of them were ruled out except five. Each one is chosen by Khamenei.

Ebrahim Raisi was the frontrunner and as a result of this manipulation of the delegates allowed to compete in the election, a large number of Iranians boycotted the vote.

Instead of 73% of the country voting as they did in 2017, just 49% of the country voted in 2021. And a whopping 12.9% of the votes were spoiled ballots (up from 2% the previous election). Raisi won 62% of the vote with second place going to spoiled ballots, third place was rival Mohsen Rezaei with 11.8% of the vote. All this means that less than 30% of Iran’s eligible voters actually voted for Ebrahim Raisi to be president and yet he won the election by a ‘landslide’.

This was a sham election put on for show by a corrupt regime.

Despite all the controversy surrounding Ebrahim Raisi’s election, the European Union saw it fit to send an official envoy to the ceremony as a sign of favour to the new administration.

Enrique Mora, secretary-general of the European External Action Service, flew in to attend the ceremony in Tehran on Thursday.

Mora is the EU coordinator for revived talks with Iran over a possible return to the 2015 nuclear deal the Joint Comprehensive Plan of Action (JCPOA).

This move was panned by critics. A joint letter by a consortium of human rights organisations in Iran said: “The EU is well aware of the fact that this man presided in 1988 and 2019 over the killing and torture of many thousands of people… We urge the EU… to address crimes against humanity, rather than standing with those who commit the crimes.”

Israel also weighed into the argument.

Foreign Ministry Spokesman Lior Haiat said, “the decision of the European Union to send a senior representative to the swearing-in ceremony of the ‘Butcher of Tehran’ is puzzling and shows poor judgment.”

Narges Mohammadi, a prominent Iranian activist denounced the EU’s attendance as aiding the “survival” of the Iranian regime.

“The people of your countries can gather in the streets for hours and state their demands from their governments. But the people of my land are shot dead for demanding water,” Mohammadi wrote, referring to recent protests in Iran which were sparked by water shortages.

Mohammadi is the spokeswoman and vice president of the Defenders of Human Rights Center, a rights group banned in Iran. Shirin Ebadi, one of the group’s co-founders, won the Nobel Peace Prize in 2003.

Masih Alinejad, a prominent US-based Iranian journalist and activist, wrote on Twitter on Wednesday that the EU is “betray[ing] its own ideals and human rights values by sending a representative to the inauguration of” Raisi, whom she described as a “mass murderer.”

The EU defended its decision to attend the events with EEAS spokeswoman Nabila Massrali said on Wednesday that Enrique Mora was attending the event on behalf of the EU’s top diplomat, Josep Borrell.

“It is crucial to engage diplomatically with the new administration and to pass directly important messages,” she said, adding the EU’s key priority was “to facilitate the way back to full JCPOA implementation”.

The presidents of Iraq and Afghanistan and senior officials from Oman, Qatar, Kuwait, Venezuela and South Korea also attended.

Likewise, leaders of Iran’s terrorist organisations also attended, including Hezbollah. The leader of Hamas, Ismael Haniyeh, was also given a front row seat.

How shameful. EU's representative, @enriquemora_ sits next to representatives of Hezbollah & Hamas, both terrorist organisations, during inauguration of Raisi, Iran's new president who's committed crimes against humanity.

I call on the West to condemn EU's endorsement of Raisi pic.twitter.com/oKW5pZtbGQ

The Iranian regime is responsible for an attack on a civilian oil tanker off the coast of Oman last week in which a Briton and a Romanian were killed. Iran is currently seeking nuclear weapons and has an expressed aim to the elimination of the state of Israel.

This rogue state cannot be trusted and should not have been legitimised by the European Union.