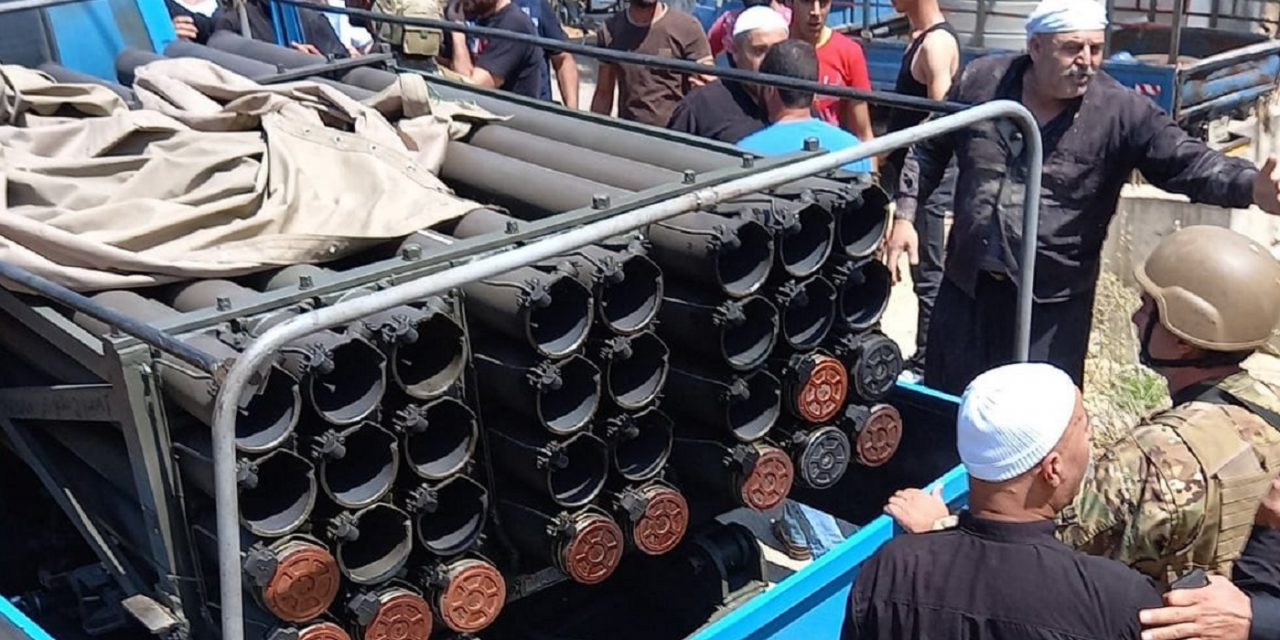 Incredible footage has emerged of Lebanese-Druze villagers intercepting a Hezbollah truck load of rockets intended for firing at Israel.

Nineteen rockets, ten intercepted by Iron Dome, were fired into northern Israel from inside Lebanon on Friday.

In a video circulating on social media, a large crowd of Druze men are seen surrounding a truck-mounted multiple launch rocket system as it drove through the village of Chouya in southern Lebanon.

A quote cited in footage posted by a Lebanese radio station says, “Film this, film this, so that the whole world sees how #Hezbollah is firing rockets from within our homes”

Some angry villagers could be heard saying: “Hezbollah is firing rockets from between homes so that Israel hits us back.”

“Film this, film this, so that the whole world sees how #Hezbollah is firing rockets from within our homes”
South Lebanon, now ⬇️pic.twitter.com/eadTjYVHST

Druze villagers surround Hezbollah rocket launcher and van in front of it (unclear who is in it) and stop the attack on Israel being fired from near their villages in southern Lebanon pic.twitter.com/dDAkCMikYL

Footage then shows the villagers dragging the rockets away. The Lebanese Army later arrived to confiscate the rocket launcher seen in the video and said it arrested four suspects involved in the rocket fire. It was unclear if any Hezbollah members were detained, but footage showed a man in one of the vehicles surrounded by the crowd.
The footage is further proof how Hezbollah is using civilians as human shields and the angry protest by Lebanese villagers reminds how many in Lebanon feel about Hezbollah’s actions in the country.

However a statement by Hezbollah following the embarrassing footage tried to give assurance that civilians were not at risk.

“The Islamic Resistance was and will always be most keen about the safety of its people and avoiding any harm to them through its acts of resistance,” the statement said.

Later Friday, the IDF said it was preparing to respond to the Hezbollah rocket attacks.

“The Israel Defense Forces is currently taking action with large-scale strikes in Lebanon, mostly with artillery and with strikes on infrastructure with fighter jets, as we haven’t done for years,” a defense official said in a statement.

“The defense establishment is preparing additional options for a response through different means — overt and covert — in accordance with developments [in the field]. The continuation of our activities will be in accordance with operational needs and a timeframe that is best suited for Israel,” he said.