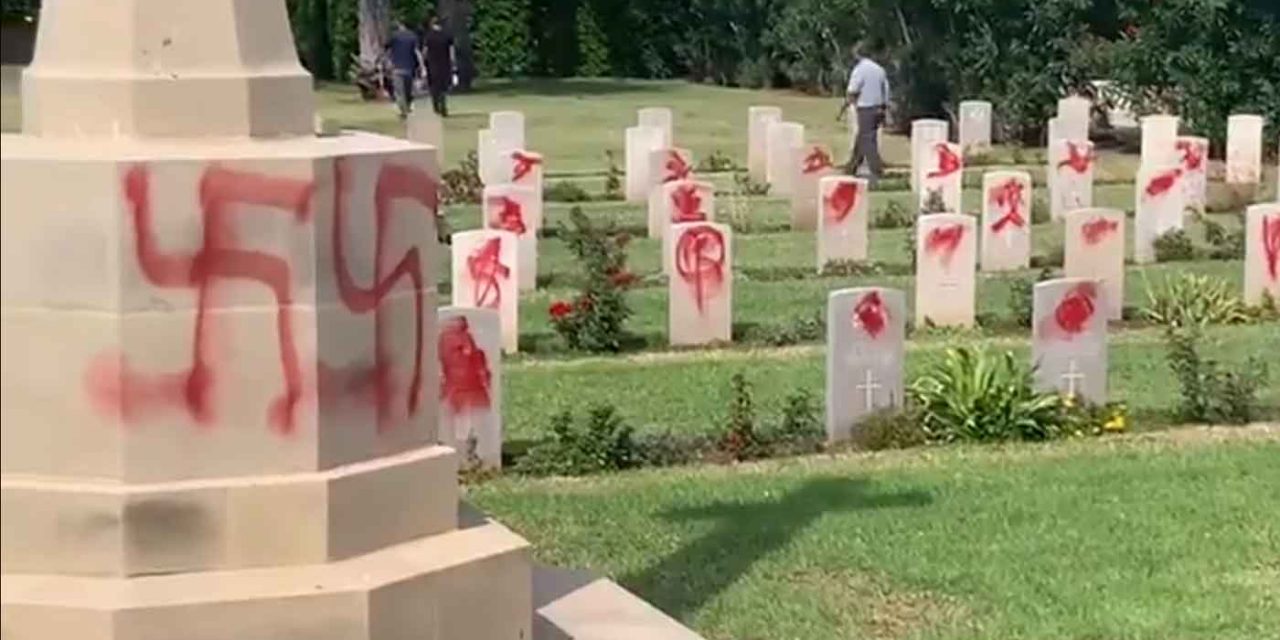 Dozens of headstones had been spray painted, some with swastikas. Large swastikas were also spray-painted onto the “Cross of Sacrifice”. Three headstones were completely smashed. The Templers cemetery which sits adjacent to the British cemetery was also vandalised.

The British military cemetery on the city’s Yafo street was temporarily closed to visitors whilst police investigated and staff from the Commonwealth War Graves Commission were on site on Friday morning to repair the headstones and remove graffiti.

Caretaker Adel Mor, who has maintained the cemetery on behalf of British authorities for 30 years, was the first to discover the damage during his morning routine. He told Walla that the incident “pains the heart.”

“Why would someone want to cause pain in a place like this? I don’t understand it at all,” Mor said.

The cemetery, established in 1918, houses the remains of 305 soldiers who fought in the region in World War I, 86 of whom are unidentified, alongside 36 casualties of World War II, according to the Commonwealth War Graves Commission. Most of the soldiers died in area hospitals, and some were killed on the battlefield.

Neil Wigan, the UK Ambassador to Israel, said he was “horrified” by the news, tweeting on Friday afternoon “I hope the Police will find those responsible.”

A statement from the Commonwealth War Graves Commission said: “CWGC is grateful for all the messages of support and would like to reassure our public that we will never allow such shameful acts to detract from our commemoration of the war dead.”

In a separate incident, around 35 tombstones were damaged on the same day in a cemetery in the northern Israeli town of Nof Hagalil, formerly known as Nazareth Illit, in an apparent act of vandalism.

The town is around 40 minutes away from Haifa and it is unknown if the two incidents are connected. Investigators had gathered evidence at the scene and launched an investigation, the police said in a statement.

Once again, the Palestinian Authority has stopped Israel from helping Palestinians during the COVID-19 pandemic. Let this be a reminder that Israel cares more for Palestinians than the...
Read More

A group of pro-Israel MPs have urged Middle East Minister James Cleverly to address "on-going concerns" around issues involving Israel, the United Nations and Iran. Calls were made...
Read More

Israel’s government helped fly in a 6-year-old boy from Ethiopia for heart treatment at an Israeli charity that performs life-saving heart surgery on needy children around...
Read More

NBC slammed for ‘most anti-Semitic’ depiction of Jews on TV

The American broadcaster NBC has been slammed for a depiction of Jews that appears troublingly anti-Semitic, inserting religious intolerance which does not exist within...
Read More