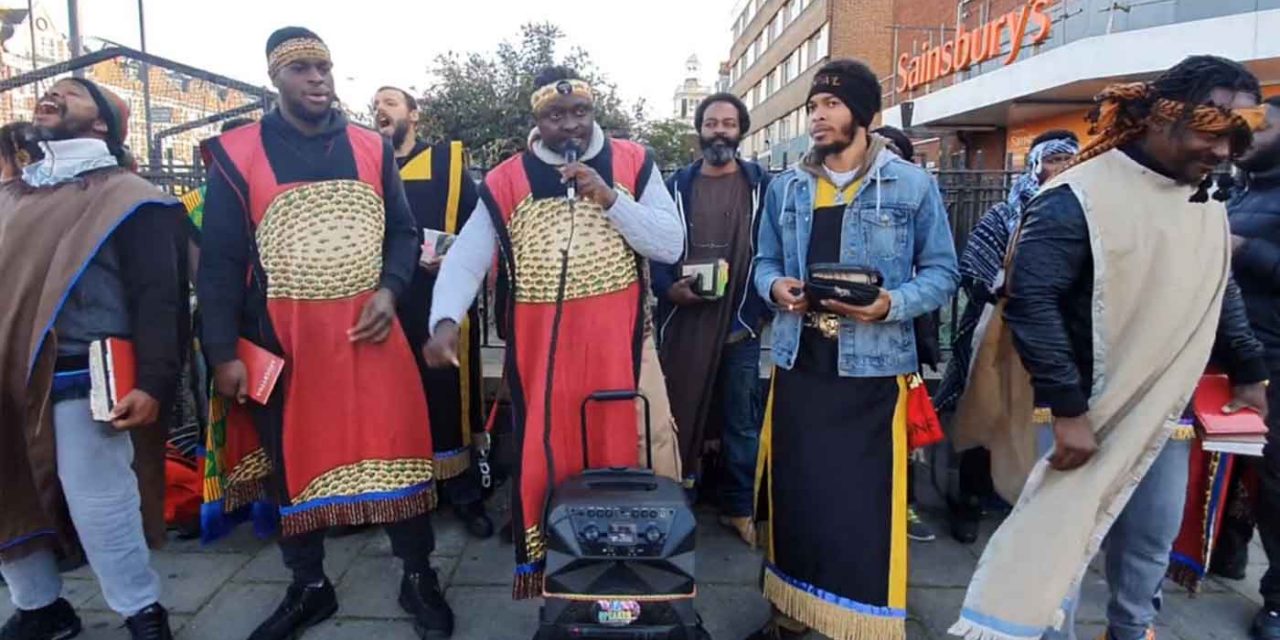 A group of “Hebrew Israelites” caused distress to many Jewish residents in Stamford Hill earlier this month with their preaching of “destroying” Jews and taking Jewish babies and “smash their heads in the stone” in a shocking display of hatred. It is also concerning for Christians as they were twisting the Bible to form the basis of their hate.

The Hebrew Israelites see themselves as the “real Jews” and that black people are the “twelve tribes of Israel”. In their view, the Jewish people are actually “Amalekites” who are their enemies (and the enemies of mankind). The group claim to preach the Bible, quoting Scripture to make their points and drawing from passages in both the New Testament and Old Testament. Sadly, it seems they have completely reversed the truth of the Bible and their translation of what the Bible says is worrying.

When challenged at one point the main preacher clarifies, “This ain’t the Christian church up here. We’re the Hebrew Israelites”.

Later on he claims, “We don’t speak deceitful words here. Everything we say is in the Bible”.

It is important to point out that though they preach using the Bible as their source, they are not preaching the truth of the Bible.

They preach that the Bible tells them the “Amalekites” (modern-day Jews from their viewpoint) will be “destroyed”, with the head preacher quoting the Bible that the Amalekites “whom art to be destroyed”.

He then says, “It says we’re gonna be happy when the Most High gives us the power to grab these damn Amalekite babies (meaning Jewish babies) and smash their heads in the stone.”

The main preacher then explains that they are going to get them “damn Amalekite devils. We’re going to take one… and smash their head. Brains all over the place”.

The preacher then claims to know this because he has “read all of these prophecies”.

Using the Bible as their source they claim that when the real Jews (meaning themselves) return to Israel, there will be peace in the world and use the contentious situation in the Middle East as their reasoning for why they believe this.

At one point in the video, the preacher says, “The land of Israel doesn’t belong to them. That’s why we come here today to curse them out, right in their faces, just like the prophecy said. Okay, right in their stronghold, man. And they’re baffled by it.”

Amongst the rather disturbing anti-Semitic views they espoused, they also subscribed to more traditional tropes, stating through the talk that Jews “control the world”, Jews “control money”, Jews “will destroy the world”, Jews “are financing all wars” and Jews “have long noses”. Although every time the group referred to the Jews as “Amalekites”, at one point declaring “there will be peace on earth when the Amalekites are put in chains”.

Surprisingly, they also claim that England was originally “a black nation” and that key figures in English history, such as King James, “was a black man”. They don’t give any evidence to back up these claims.

This is an example of Christianity that has warped from the true meaning of the Bible to apply a racist ideology to the Scriptures to distort their true meaning. The Bible is clear about who the Jewish people are and their return to the land of Israel. The Bible is also clear that God will bless those who bless Israel and the Jewish people and curse those who are against them.

These men desperately need to come to a full understanding of the Bible and turn away from their hatred of God’s people.