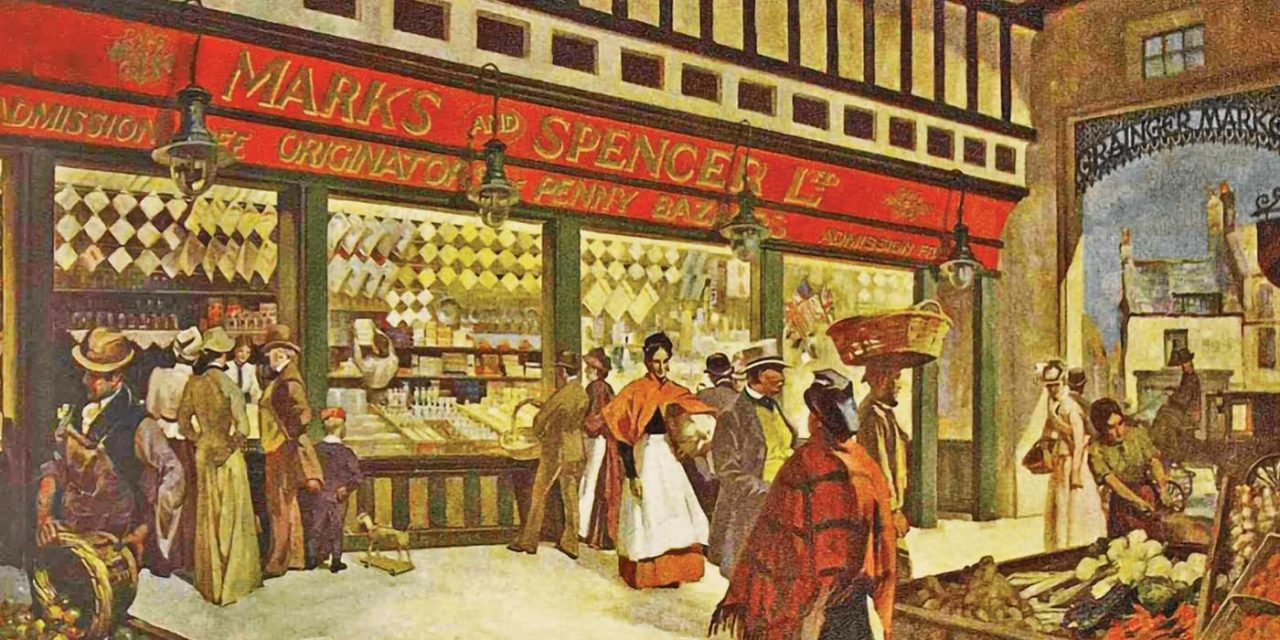 Marks & Spencer, also known as M&S, is one of Britain’s most successful retailers. But did you know that M&S has Jewish roots? And not only that; throughout the last century, its founding families played a significant part in Britain’s support for the State of Israel.

The retail giant we know today had humble beginnings. Jewish immigrant Michael Marks was born in Slonim in present-day Belarus and arrived in England in the early 1880s having fled Jewish persecution. He settled in Leeds with very little money and spoke poor English. The Yorkshire city was home to a company called Barran that provided employment for Jewish immigrants fleeing the Russian pogroms. It was here that Marks began his working life as a pedlar, travelling across West Yorkshire selling small goods.

In 1884, he met local businessman Isaac Dewhurst, who helped Marks improve his English and lent him £5 to set up his own stall on Leeds Kirkgate Market.

Ten years later in 1894, with a growing business, Marks was introduced by Dewhurst to Thomas Spencer, who was born and bred in Skipton, Yorkshire. Dewhurst believed Spencer, known as an excellent book-keeper, would be the ideal business partner for Marks. Marks and Spencer opened their first permanent stall on the Kirkgate Market and registered the company soon after. Spencer brought skills in administration and accounts, using his contacts to get the best deals from manufacturers and Michael Marks used his giftings in selling and dealing at the market stalls. 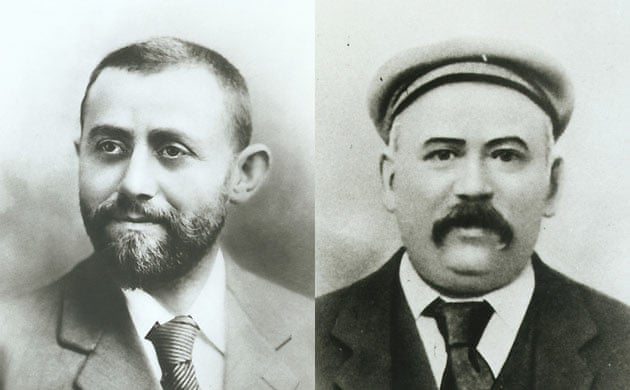 They called their new stores “Penny Bazaars” – an innovative idea Marks had tried on his Leeds market stall where everything was priced at a penny – long before the high street pound shop we’re familiar with today! Their slogan was “Don’t ask the price, everything a penny” and its popularity grew very quickly.

It was not the only revolutionary idea. In a first of its kind, their stores were “admission free”, meaning customers could browse without any obligation to pay and were even allowed to handle goods before purchase, something unheard of at the time. They also introduced receipts, an uncommon phenomenon, allowing customers to return unwanted items, thus protecting the buyer. These are things we take for granted today, but Marks and Spencer set a standard for customer service that would eventually launch their firm into a global brand.

After the first ever permanent Penny Bazaar opened in 1894 in Leeds Kirkgate Market, they soon spread as high street shops or market stalls throughout the north with Manchester becoming the national headquarters only three years later. By 1900 Marks and Spencer had 36 Penny Bazaar outlets across England and Wales, including seven in London.

Sadly Thomas Spencer died in 1905 aged 54. His wife, Agnes, died in 1959 aged 98 and lived to see the business empire her husband had planted. She remained a strong supporter of the Marks family and was heavily involved in the company’s charitable works throughout her life. In 1907 Michael Marks also died. But this wasn’t the end of Marks & Spencer. Michael’s son, Simon Marks, who joined the firm that year, took over as chairman in 1916 aged 28 and led the company for 56 years. The popular home-brand St Michael’s was established in 1928 by Simon as a tribute to his father and was used until 2000. But business wasn’t the only legacy Michael Marks left his son. As we will read, his Jewish roots were about to play a central role in a higher purpose over the coming decades.

Simon Marks began his tenure at the helm of Marks & Spencer by inviting his brother-in-law, Israel Sieff to be his business partner. It was the start of a life-long partnership and ensured M&S continued as a family business. In fact, Simon and Israel each married the other’s sister!

During the 1920s, Marks changed the direction of the firm, selling very high-quality goods at affordable prices. He used the St Michael’s brand to cut out the independent retailers, producing 99 per cent of its goods in British factories. They grew the business exponentially despite the Great Depression. Consistent with its founding principles, M&S became known for its excellent treatment of staff. They also recognised changing times: customers were now being able to buy ready-made clothing in fashionable patterns as opposed to only fabric.

Marks and his brother-in-law Sieff along with several family members were strong supporters of Zionism. In fact, they became known in pro-Zionist circles as ‘The Family’. They gave generously to the Zionist cause, believing in the importance of a Jewish national home in what was at the time called Palestine.

Manchester became the centre for Zionist support in Britain with Marks and Sieff among those in the city mentored by Zionist leader Chaim Weizmann. This group of visionary Zionist leaders believed Jews not only had a right to a Jewish state in their ancestral homeland, but the rise of anti-Semitism in Europe made the need even more urgent. It cannot be overstated how important their efforts were alongside other Manchester Zionists in urging the British government to support the Zionist cause.

Simon Marks served as vice-president of the Zionist Federation and in 1918 Israel Sieff was a member of the Zionist Commission which visited the Mandate of Palestine following the signing of the Balfour Declaration. His wife Rebecca meanwhile helped found the Women’s Zionist Organization.

In 1933, Weizmann wanted to provide a refuge for Jewish scientists forced out of Germany and address the agricultural problems in Palestine. Israel and Rebecca Sieff opened the Daniel Sieff Research Institute in memory of their youngest son. In WW2, the institute provided Allied Forces with pharmaceuticals and helped in producing synthetic rubber. When Weizmann became Israel’s president the Sieff Research Institute became part of the Weizmann Institute. 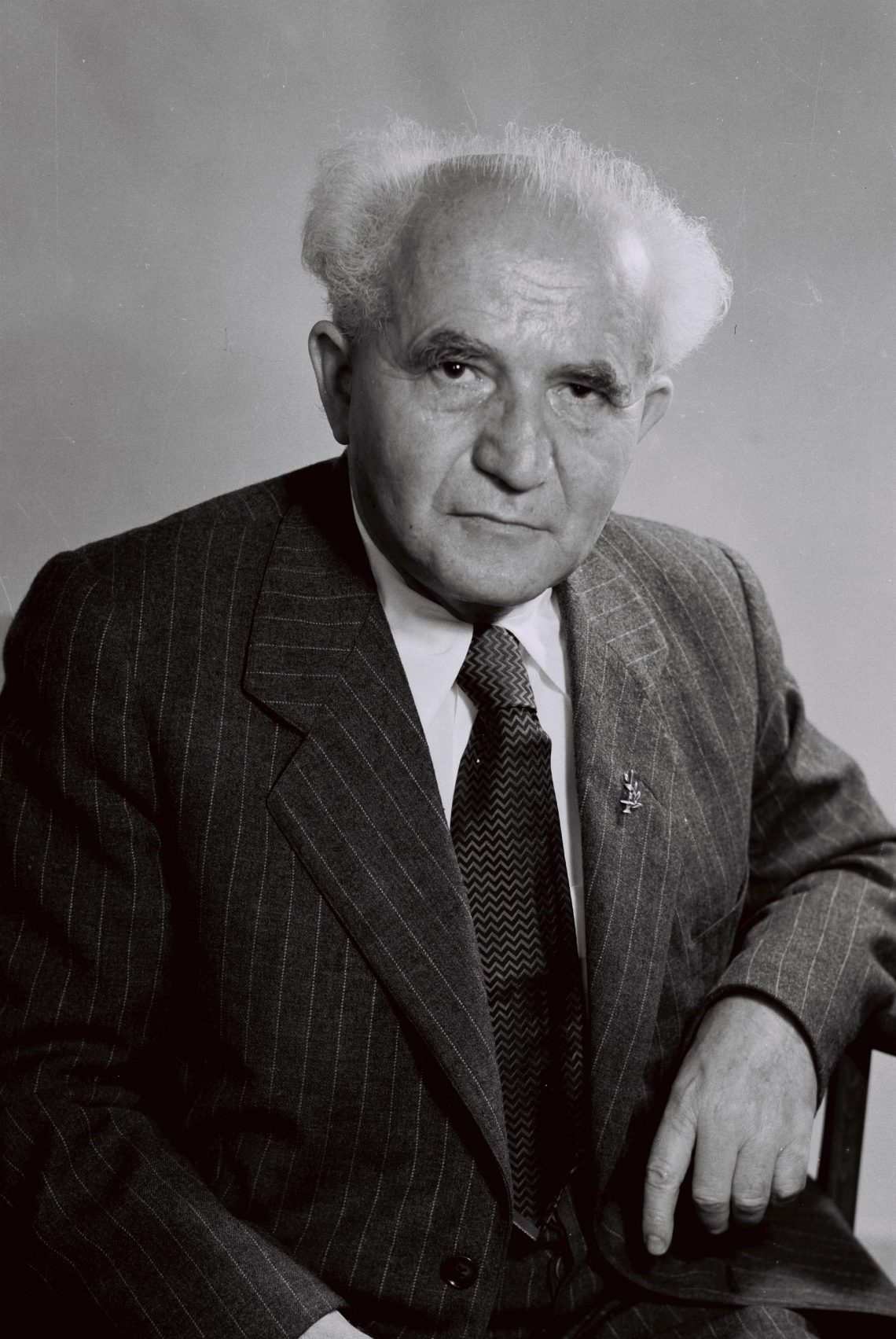 Upon the rebirth of the State of Israel, Marks & Spencer’s directors wanted their firm to become a model for Israeli commerce. Israel and Rebecca Sieff’s second son, Marcus Sieff, first visited the Mandate of Palestine in 1939 at the age of 16. After serving as a British Army colonel in the War, Marcus was asked by Israel’s first prime minister, David Ben Gurion, to help defend the new state. Sieff accepted the offer to join the Israel Defense Forces in which he advised on transportation and supplies to the Israeli defence ministry. He even helped coordinate Marks & Spencer goods and finances to support the new state. In fact, in his 1990 book, Management: The Marks and Spencer Way, Sieff suggested one of the fundamental objectives of M&S was to “aid the economic development of Israel.”

Marcus Sieff returned to Britain in 1951 to lead the company’s expanding food department, but throughout the next few decades Marks & Spencer supported Israeli agriculture and manufacture with both supplies and imports. It wasn’t long before M&S pioneered the latest innovation in food preservation – canned fruit – and you can probably guess where the oranges were sourced!

British-Israeli trade was soon booming because of M&S. Marcus became chairman in 1972 and served on the board until his death in 2001 as did his son Sir David Sieff. From the mid-sixties to the mid-1990s, M&S held a special place in the heart of the Jewish community. Much of Israel’s success in the textiles and fashion industry was attributable to M&S’s research, development and purchasing power. In the 80s and 90s, regarded as M&S’s golden era for high street clothing, the British public were buying fresh chic designs by Israeli fashion designers, which M&S was able to produce in fabulous quality and in double-quick time. By 1997 Marks and Spencer was rated the fourth most profitable retailer in the world.

The ties between the M&S founding families and Israel were so apparent that in 1974, former M&S chairman, Joseph (Teddy) Sieff, Israel Sieff’s brother, was the victim of a PLO assassination attempt at his London home. He survived a bullet to his face after his would-be assassin fled when the second shot jammed. 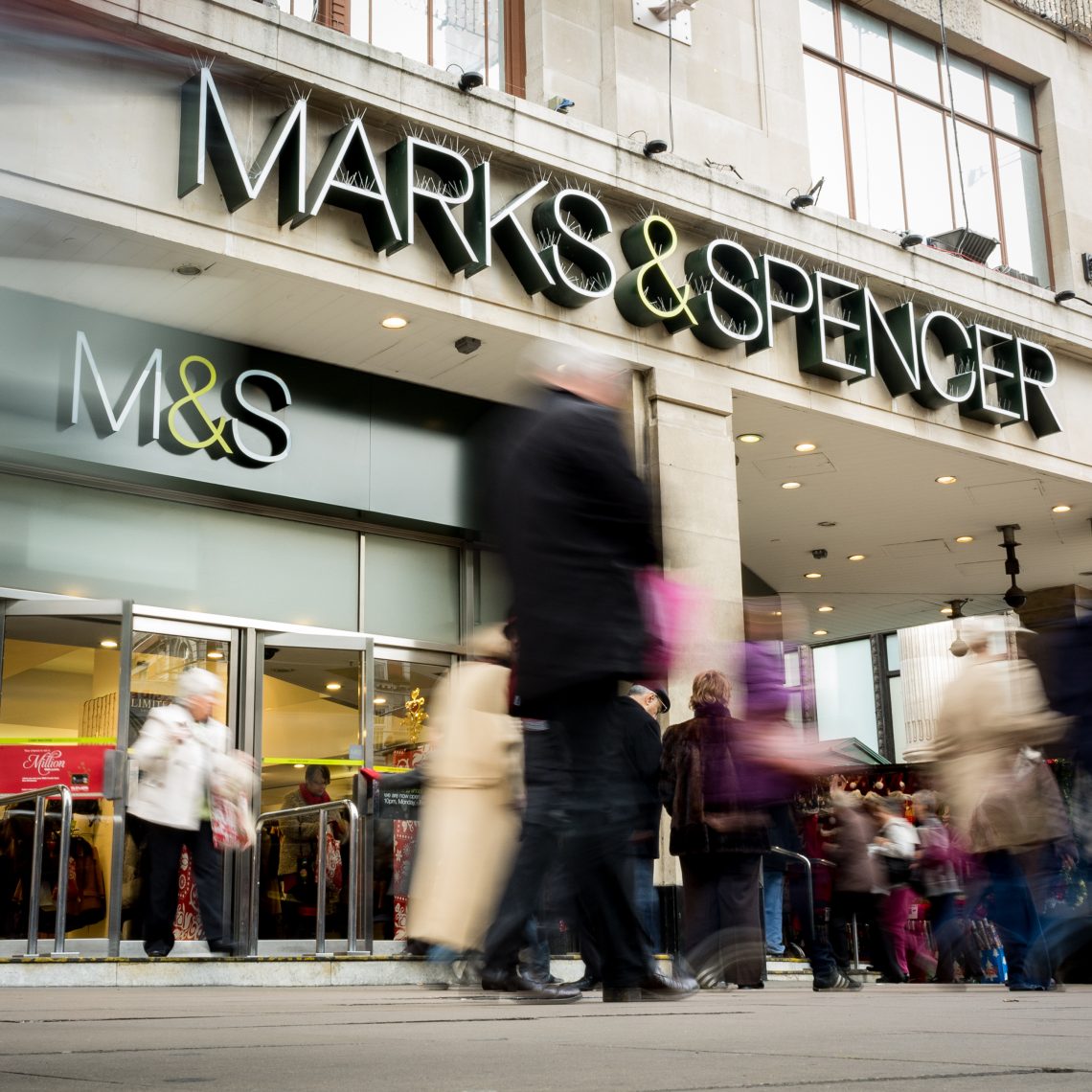 Blurred shoppers walking past the shop front to the Marks and Spencer department store on London’s Oxford Street.

Marks & Spencer’s Jewish roots and support for Zionism has led the company, now a global brand, to be targeted by anti-Semitic boycotts and protests. Even today, despite the founding Jewish families having no apparent influence, M&S is still vilified by those who disdain Israel.

M&S will always hold a place in the heart of the Jewish community in the UK, as it does with all those who appreciate the legacy of this iconic British brand that has tried to do things the right way. Perhaps the next time you enter a M&S you will be reminded of the Jewish refugee arriving in Leeds and the tremendous support the Marks & Spencer dynasty gave in the creation of the State of Israel.