Israeli innovation and COVID in 2020 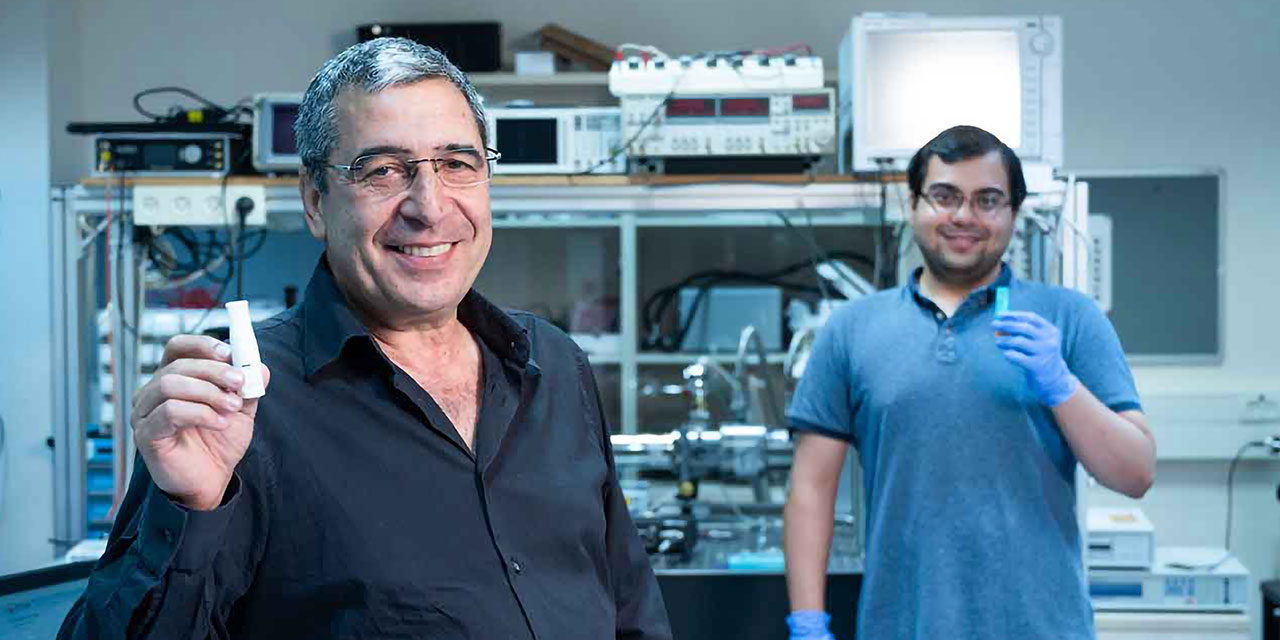 Israel has been part of the global battle against COVID-19 with Israeli start-ups giving their best efforts in trying to prevent the spread of the virus and helping treat its victims. In this article we look at some of the ways Israel has been a light to the world despite the very difficult challenges, ranging from scientific breakthroughs to innovative ideas you may not have heard about.

Half a million Jews participated in a mass online prayer event regarding the coronavirus staged on various different digital platforms and involving rabbis and participants from around the world. Yarden Leitner, a young student who suggested Jews around the world unite to pray for divine intervention to stop COVID-19, said,  “not only will the virus not prevent us from gathering, we will unite as the Jewish people never did before in all of history.” Leitner declared, “When the people of Israel are united, nothing is too big for us to handle.”

Israel led a UN innovation conference in May focused on developing technological tools to combat the coronavirus. It featured world-renowned experts including Israeli Nobel Prize winner Professor Ada Yonat and Israeli scientist Dr. Kira Radinsky, recognised worldwide for her advancements in predictive analysis. Israel is showing itself as a frontrunner of innovation on the global stage.

In Israel, several pharmaceutical companies have been intensively researching and developing drugs to combat symptoms of COVID-19. In the early periods of the pandemic, Israel was the first to try certain drugs that are now more widely used. Meanwhile, here in Britain, teams at the Weizmann Institute for Science in Israel and the Diamond Light Source laboratory in Oxfordshire have been working together in pioneering an “open” and fast research method that could lead to an anti-coronavirus drug.

“I have never seen anything like this,” said Sharon Gould, the Executive Director of Weizmann UK, “we normally think of research as being a grindingly slow process, especially basic research, but in this case the race is really on to find a solution to stop this deadly virus”.

Solidarity in the Arab world

The Israeli Foreign Ministry (IFM) received messages of solidarity from across the Arab world as the coronavirus crisis intensified. Responding to an IFM social media post in Arabic, one user from Iran called it a “beautiful message of solidarity and peace.” An Iraqi user posted, “Our hearts are with Israel and the world at large, in all its diversity, religions, and beliefs, to defeat this virus together.” A woman from Morocco wrote, “May God preserve everyone. Humanitarianism first and foremost. Perfect health to all the sick.” It is wonderful to see that in such trying times people from different backgrounds were brought together in unity.

In June, Israel and the United Arab Emirates publicly announced a historic strengthening of ties between the two countries by agreeing to cooperate in efforts against coronavirus.

Prime Minister Netanyahu said the agreement was “the result of extensive and intensive contacts in recent months and will bring a blessing to many in our region.”

A spokesman for the UAE’s Foreign Ministry said, “In light of strengthening international cooperation in the fields of research, development and technology in service of humanity, two private companies in UAE sign an agreement with two companies in Israel to develop research technology to fight COVID-19.” 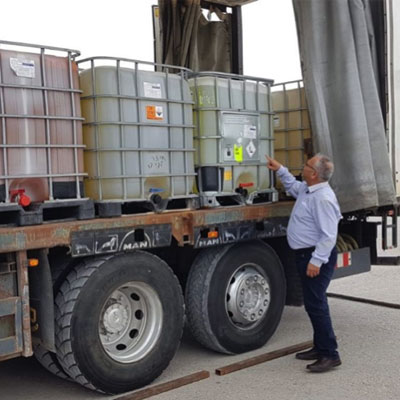 Israeli and Palestinian health and medical bodies made unprecedented strides in cooperation towards preventing the spread of the coronavirus.

Israel transferred hundreds of testing kits, protective suits and masks for medical teams, supplied to Gaza by the World Health Organisation. Israel also provided important training for Palestinian medical teams, even bringing Gazan nurses into Israel to train them, and delivered several shipments of disinfectants to the Strip.

The cooperation is further evidence debunking the myth that there is apartheid in Israel. It also shows how Israel is willing to love their neighbour in Gaza, despite Hamas seeking to wipe Israel from the face of the earth.

Whilst the cooperation at ground level was significant, the Palestinian leadership continues to put politics before the health of its own people. The Palestinian Authority (PA) refused two planeloads of medical supplies from the United Arab Emirates intended for Gaza and the West Bank just because the cargo went through Israel.

The Etihad Airways flights, which landed in Tel Aviv, contained ventilators and gas for use in hospital equipment, which the PA claimed it desperately needed. It was a significant step in Israel’s relationship with the UAE, but the PA once again demonstrated that its disdain for Israel is greater than its desire to help its own people.

An Israeli-made AI-powered robot assistant called Temi is being used in hundreds of hospitals, medical centres, nursing homes, and corporate buildings in Asia to help minimize human-to-human contact to aid with social distancing.

Israeli startup Robotemi, the developer of the Temi robot assistant, says the product has already been distributed to hundreds of locations throughout Southeast Asia including China, Japan, South Korea, and Hong Kong. The Temi was initially conceived as a companion to senior citizens and busy families and was not specifically intended to help with a virus outbreak but that is exactly what is happening. 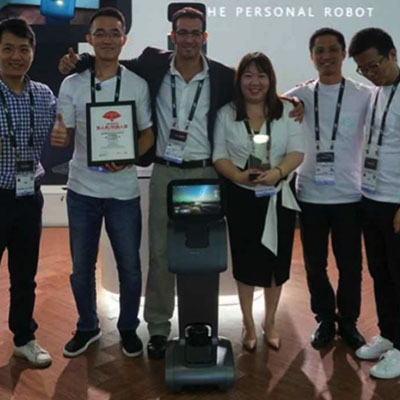 Israel’s Health Ministry launched a dedicated smartphone app at the beginning of March to help keep the whole country informed.

Titled CoronApp it includes updated public health guidelines; announcements by the ministry on the latest restrictions, limitations and quarantine requirements; an option to report self-quarantine; reports on locations visited by recently diagnosed patients prior to their quarantine; user-submitted questions, ministry officials’ responses; and more.

To meet the high demand in ventilators, the Startup Nation’s public, private and non-profit sectors rallied together to find fast and affordable alternatives.

“Our defense industries have unparalleled capabilities — able to manufacture components quickly and in great quantities, whether it’s for weapon systems or ventilators. This eliminates our dependence on imports,” said Gold. “We are continuing in the race around the clock to translate the extraordinary tech capabilities of the defense establishment, to the fight against corona.”

Meanwhile a group of Israeli researchers and experts from a variety organisations partnered to create a low-cost ventilator whose blueprints, design and codes are completely open-source meaning they can be mass-produced in labs without the need of dedicated factories. Components can be easily built with limited tools

and parts, for example 3D printers and car pieces, making the production much more accessible even in less developed countries. 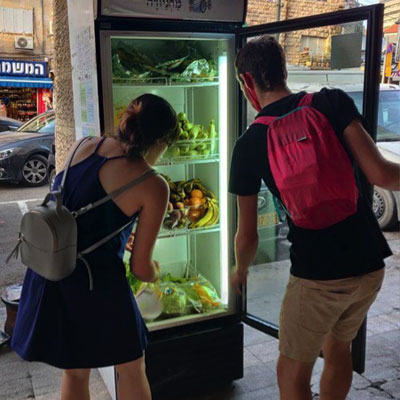 A new initiative to distribute food to the poor and prevent waste was launched in Jerusalem in June.

Spearheaded by young residents of Jerusalem, the project, simply called “The Fridge”, involves public refrigerators stocked by local vendors who donate unsold produce. The fridges have been placed in cities throughout Israel and help stop fresh produce from spoiling in the Israeli heat.

Frontline medics in Israel thoughtfully placed portrait photos of themselves on their protective suits. This meant that COVID-19 patients could more easily relate to the staff member treating them.

Wedding in a supermarket

The coronavirus didn’t stop this happy couple from getting married despite the lockdown in Israel. At the time, the restrictions in place banned gatherings of 10 or more people, with the exception of supermarkets where the limit was 100. The groom still got to walk his bride down the ‘aisle’. 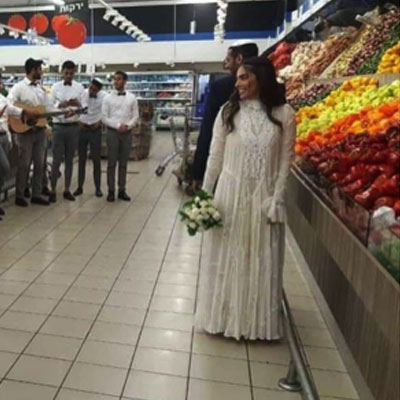 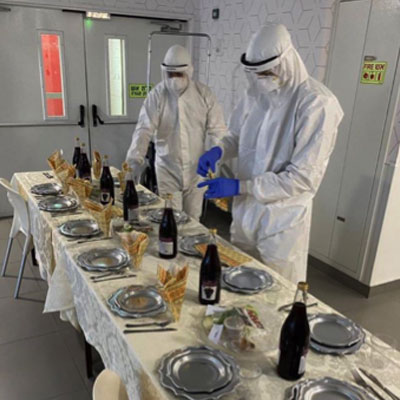 er meal for Coronavirus patients to celebrate the first night of Passover. This was one of the many examples of how Israeli medical teams ensured their patients could continue to celebrate the Biblical feasts despite the virus.

Another wonderful example of loving your neighbour. At Purim this Jewish gentleman in Israel was photographed reading Scripture to a person in quarantine due to coronavirus. Megillah is the traditional reading aloud of the Bible account of Esther at Purim. 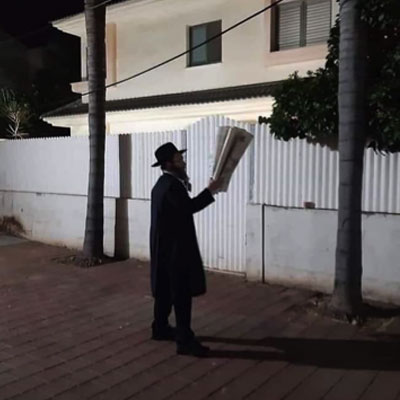