UN, EU and UK condemn US over Golan recognition 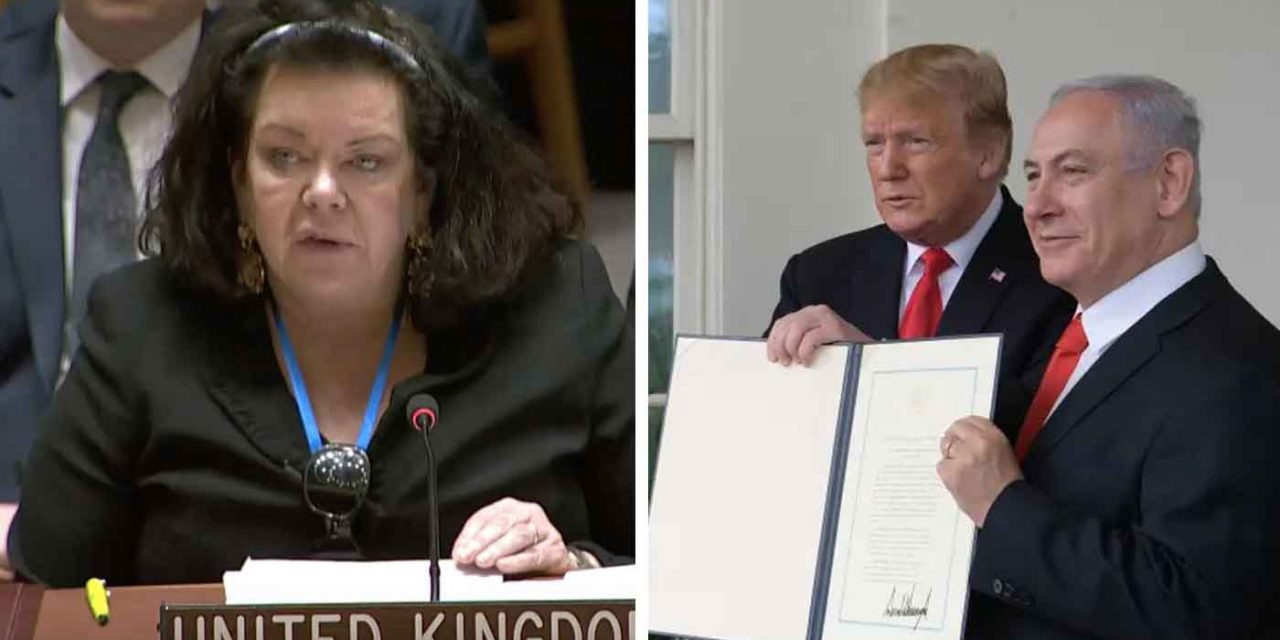 The United Nations and the European Union criticised the United States for its decision to recognise Israel’s sovereignty over the Golan Heights.

Fourteen of the 15 members of the U.N. Security Council took to the floor on Wednesday night to slam the Trump administration’s announcement and the declaration signed Monday by the president. The United States is the 15th member. And yes, the United Kingdom was one of the countries condemning the decision (see below).

Representatives of Israel and Syria were invited to attend the debate, but no formal vote was taken.

Many claim that Israel’s annexation of the Golan Heights is “illegal under international law”. However, this is not the case.

Following the 1967 Six Day War, Israel took the Golan Heights as part of a defensive move after being attacked by Syria. To this day, Syria and Israel are still at war. Under international law, a country is not required to give back land obtained in defence when the two countries are still at war. On top of this, Hezbollah and other terrorist groups have established themselves in Syria. These are direct enemies of Israel whose stated purpose is the destruction of Israel. So there is no way Israel can give back that land without putting civilians at risk.

The UK’s position on the Golan

Karen Pierce, the UK Ambassador to the UN said, “it is our position that the Golan Heights is territory occupied by Israel.”

Speaking of Israel’s annexation in 1981, she said, “the United Kingdom did not recognise that annexation and nor do we today.”

Pierce then went on to speak of Britain’s pride in being the country that penned resolution 242, which called on Israel to withdraw from the Golan and was passed unanimously by the UN Security Council. This highlights that the UK’s foreign policy has been at odds with Israel for a long time on this issue.

The UK did, however, recognise that Israel has a right to defend itself and also acknowledged that the Golan was a strategic point for Israel to effectively protect its citizens. Despite this, Piece still highlighted that UNSC resolutions cannot be ignored. She suggested that even if it means Israel’s security would be in jeopardy, they still had to give up the Golan. This is despite after acknowledging that Syria had allowed Hezbollah to take a foothold in the country.

The UK Ambassador said, “We emphasise the importance of adhering to rules-based international system and abiding by UNSCRs which are designed to protect it. This is true irrespective of how important the Golan is to Israel’s security, or of the lack of progress in peace talks.”

Pierce also spoke of the UK’s firm belief that states must resolve issues “peacefully” and through dialogue.

"We emphasise the importance of adhering to rules-based international system and abiding by UNSCRs which are designed to protect it.

This is true irrespective of how important the #Golan is to Israel’s security, or of the lack of progress in peace talks."@KarenPierceUN | #UNSC pic.twitter.com/NFKNy2wvsd

Netanyahu praises US recognition of the Golan as part of Israel

President Trump said it was time for the U.S. to take the step after 52 years of Israeli control of the strategic highlands on the border with Syria.

“This should have been done numerous presidents ago,” Trump said.

Today, it was my great honor to welcome Prime Minister @Netanyahu of Israel back to the @WhiteHouse where I signed a Presidential Proclamation recognizing Israel’s sovereignty over the Golan Heights. Read more: https://t.co/yAAyR2Hxe4 pic.twitter.com/gWp6nwRwsY

“This was a long time in the making,” Trump said alongside Prime Minister Benjamin Netanyahu at the White House, as he signed the proclamation.

Speaking ahead of the signing, Trump said the move would “allow Israel to defend itself” against the “significant security challenges it faces every single day.” He said Israel “took the Golan Heights to safeguard from external threats,” such as those it currently faces from Syria, Iran, and the Iran-backed Hezbollah terror group.

According to the text of the proclamation, “Any possible future peace agreement in the region must account for Israel’s need to protect itself from Syria and other regional threats. Based on these unique circumstances, it is therefore appropriate to recognize Israeli sovereignty over the Golan Heights.”

It proceeds to “hereby proclaim that, the United States recognizes that the Golan Heights are part of the State of Israel.”

PM Netanyahu: "Mr. President, over the years, Israel has been blessed to have many friends who sat in the Oval Office, but Israel has never had a better friend than you. You show this time and again." 🇮🇱🇺🇸 pic.twitter.com/2u41r3Fhgq

The US president, speaking later in the Oval Office, also said he had studied the issue for “years” and “this should have been done, I would say, numerous presidents ago. But for some reason they didn’t do it, and I am very honoured to have done it.”

Israel captured the Golan from Syria in the 1967 Six-Day War but the international community has refused  to recognize Israeli’s sovereignty over the territory. During the war, Syria and three other Arab nations attacked the Jewish state.

In his remarks, Netanyahu thanked Trump for the “historic” recognition of the Golan Heights, and for his administration’s “incredible support” for Israel.

“Israel has never had a better friend than you,” Netanyahu told Trump.

“Your decision to recognize sovereignty is a two-fold act of historic justice: Israel won the Golan Heights in a just war of self-defense, and the Jewish people’s connection to that land goes back generations.”

Netanyahu said the mountainous plateau along the Syrian border was “invaluable” to Israel’s self-defense, and the “historic decision has profound meaning for me and us and all Israelis.”

“Your proclamation comes at a time when the Golan is more important than ever for our security, when Iran is trying to establish bases in Syria to strike at Israel. From across the border in Syria, Iran has launched drones into our airspace, missiles into our territory,” continued Netanyahu.