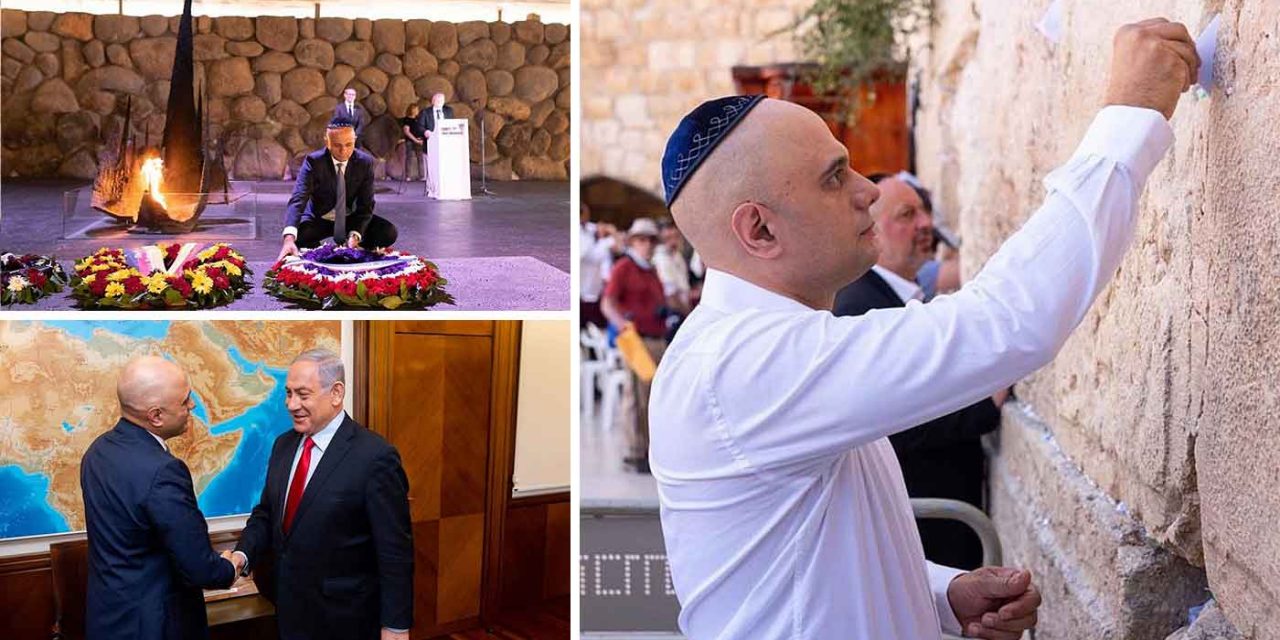 Interestingly, Israel was the country Sajid Javid and his wife, who is a Christian, decided to have their honeymoon after they were married 20 years ago, and Mr Javid speaks of his fondness for Israel after his brother went on a trip to Israel as a child and despite opposition from the school, his Muslim father defended the trip and encouraged his community to have greater interaction with Israel.

Home Secretary @sajidjavid visited the Occupied Palestinian Territories and Israel to discuss the region’s security, tackling extremism and the importance of freedom of religion.

In an opinion piece in the Jewish News, Sajid Javid wrote:

“It has been well worth the wait. I had the privilege of meeting with prime ministers and security leaders on both sides, the UN’s special coordinator for the Middle East peace process, as well as some impressive venture capitalists trying to make a difference through tech.

But for me, the real focus and highlight was meeting with religious leaders from all of the major Abrahamic traditions and touring the deeply moving Yad Vashem Holocaust memorial.

This is a region draped in a rich tapestry of history, culture and religion. When you stroll through the ancient streets of Jerusalem’s Old City, visit the ancient church of Holy Sepulchre, or climb the rocky foothills of the West Bank city of Ramallah, it truly hits home why this region is such a special place, and the significance the sacred Holy Land holds to Jews, Christians and Muslims alike.”

During his visit, Mr Javid met with Israel’s Prime Minister Benjamin Netanyahu. The two discussed the strengthening security cooperation between Israel and the UK.

Netanyahu also took the opportunity to thank the Home Secretary as it was Sajid Javid who took the decision to ban the terrorist group Hezbollah in full. Something CUFI campaigned for. Hezbollah is an Iranian backed organisation that seeks the destruction of Israel and the Jewish people.

He also spoke about anti-Semitism in the UK saying:

“Like many I’ve been deeply troubled by the rise in antisemitic incidents back home, with over 100 reported every single month this year.

We opened our country and our homes to Jewish families and children fleeing the horrors of Nazi Germany all those years ago.

I never would have imagined that in 2019, Jewish people would fear abuse and attack on our streets, or fear of cemeteries and synagogues being daubed with swastikas and vile racist epithet.

As both home secretary and communities secretary, I’ve been determined to safeguard our Jewish communities from this creeping antisemitism which not only fuels hate crime, but also extremism and even terrorism.

I have increased the funding provided for protective security at Jewish community sites to record levels – but it is shameful that it is necessary that Jews need more protection than any other British citizen.”

It is important that the Home Secretary made this trip and we pray that it will have a lasting impact on him. The UK government must do more to show our friendship and solidarity with Israel and the Jewish people.