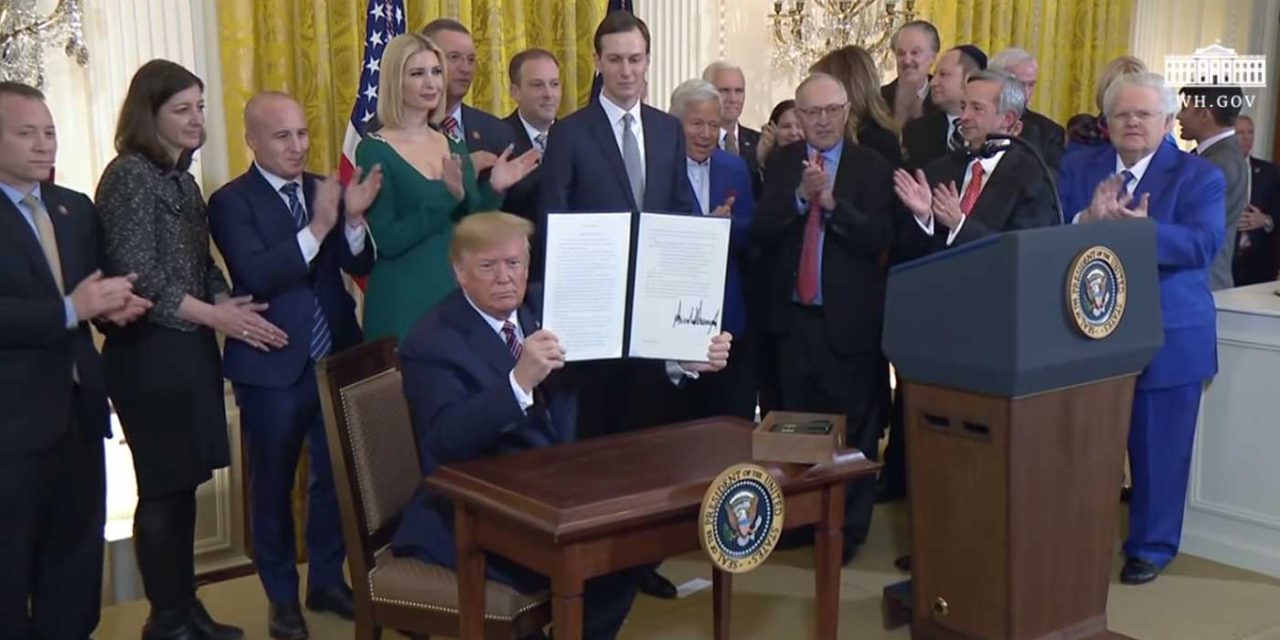 U.S. President Donald Trump reaffirmed his support for the Jewish community at the first of two White House Hanukkah receptions on Dec. 11.

“Across our country, Jewish Americans strengthen, sustain and inspire our nation,” he said. “As president, I will always celebrate and honor the Jewish people, and I will always stand with our treasured friend and ally, the State of Israel.”

At the event, Trump signed an executive order calling on U.S. government departments to enforce Title VI of the Civil Rights Act of 1964, which prohibits the federal funding of universities and other institutions that engage in discrimination based on race, color and national origin, and will now also be applied to anti-Semitism. The executive order additionally stated that U.S. government agencies should “consider” adopting the International Holocaust Remembrance Alliance (IHRA) definition of anti-Semitism.

“This is our message to universities,” said the president. “If you want to extend the tremendous amount of federal dollars that you get every year, you must reject anti-Semitism, and you will never tolerate the suppression, persecution or silencing of the Jewish people.”

He added, “We have also taken a firm stand against BDS.”

“One cannot defeat that which they are unwilling to define. As such, advancing the Anti-Semitism Awareness Act has been CUFI’s top policy priority of the year. Through this executive order, President Trump will achieve what Congress could not bring themselves to do: take an important first step in combating the scourge of anti-Semitism that has spread across our nation,” Hagee said.

“Countries around the world adopted the IHRA’s definition while our leaders in Washington were too paralyzed to do so. I and CUFI’s 7 million members are very grateful to the President for his unequivocal stance on this vital issue,” Hagee added.

“At a time of extreme partisanship, the Anti-Semitism Awareness Act enjoyed widespread bipartisan support but not even that enabled the legislation to overcome the gridlock on Capitol Hill. It is astonishing to me that Congress dithered with meaningless resolutions while violent anti-Semitic incidents were surging across the country, but it is precisely because of such Congressional paralysis that President Trump’s executive order is the right and necessary path to adopting the IHRA’s definition,” Parker said.

Harvard Law professor emeritus Alan Dershowitz was also there and called the executive order “a game changer” and “one of the most important events in the 2,000-year battle against anti-Semitism.”

Others praised the move.

“It will have an immediate impact on U.S. campuses plagued with anti-Semitic and extreme anti-Israel acts, where many university officials complained that the lack of a working definition of anti-Semitism hampered efforts to deal with anti-Semitic incidents on campus,” said Simon Wiesenthal Center associate dean Rabbi Abraham Cooper in a statement.

“Now, through this Executive Order, necessitated by Congress’ failure to pass legislation, university officials and Jewish students will be better equipped to deal hate attacks often associated with the anti-Israel BDS campaigns.”

“More broadly, President Trump’s Executive Order sends a strong message domestically and around the world against history’s oldest hate at a time of surging anti-Semitism on both sides of the Atlantic,” he added.