Tributes pour in after death of Rabbi Lord Sacks 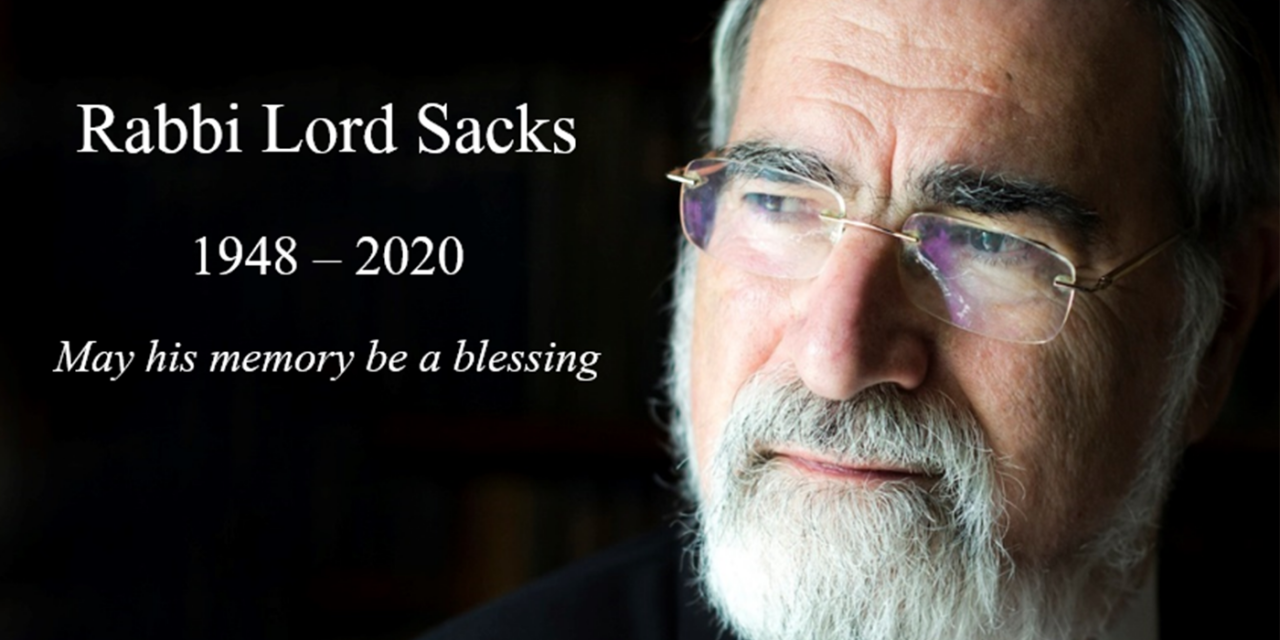 Rabbi Lord Jonathan Sacks, the former chief rabbi in the UK, has died at the age of 72 after succumbing to cancer on Saturday.

Rabbi Sacks was an intellectual who wrote numerous books, he was an ardent advocate for Israel and was known widely as a wise sage outside the Jewish community because of his regular broadcasts on Radio 4’s Thought of the Day.

A statement on his Twitter page said he died early Saturday.

Sacks served as the chief rabbi of the United Hebrew Congregations of the Commonwealth, the figurehead of British Jews, for 22 years, stepping down in 2013.

UK Chief Rabbi Ephraim Mirvis, who succeeded Sacks, said the world had “lost a Torah luminary and intellectual giant who had a transformative global impact.”

Rabbi Sacks was “an extraordinary ambassador for Judaism, helping many to understand and be proud of their heritage,” Mirvis said. “He will be deeply missed, not just within the Jewish world, which benefited immeasurably from his teachings, but far more widely, by all those whose lives he enlightened with his wisdom, profundity and inspiration.”

CUFI UK was very saddened to learn of the passing of Rabbi Lord Sacks on Saturday, aged 72.

“We extend our sincere condolences to his family and the entire Jewish community,” says Executive Director, Des Starritt, “Rabbi Sacks, the UK’s former Chief Rabbi, was highly respected for his wisdom and moral clarity not just by the Jewish community but by Christians too. He will be greatly missed.”

For many people in the UK, Sacks was best known for his regular broadcasts on the “Thought of the Day” fixture on BBC Radio 4’s “Today” program, the network’s flagship morning news program.

Mohit Bakaya, the controller of the radio channel, said Sacks was a man of “great intellect, humanity and warmth,” whose contributions to the “Thought of the Day” segment were “some of the most erudite.”

British Prime Minister Boris Johnson joined in the tributes to Sacks, saying his leadership had a “profound impact on our whole country and across the world.”

Tony Blair, who was prime minister for much of the time that Sacks was chief rabbi, described him as “a man of huge intellectual stature but with the warmest human spirit.”

The Church of England’s leading cleric — Archbishop of Canterbury Justin Welby — paid tribute to Sacks as having been that “rare combination – profound depth, and equally profound commitment to relating with others – that made the leadership he offered possible.”

“Rabbi Sacks bravely faced difficult questions and always found the right words to illuminate the Torah and explain its paths,” Rivlin said. “We will always remember his warnings against violence in the name of God, and his belief that we have the power to heal a fractured world.”

“His insights on the heritage of the Jewish people and on anti-Semitism will live on, for our generation and future generations. May his memory be a blessing,” Netanyahu tweeted.

Dayan Ivan Binstock gave a eulogy for Rabbi Sacks touching on this, saying, “Jonathan, in a sense, we are all your children to whom you gave sweets. You made Torah sweet for us, whether we were your listeners in shul or followers of your broadcasts and writings, you made even the most challenging of subjects palatable, even sweet.”