Theresa May: UK-Israel ties are “stronger than ever” 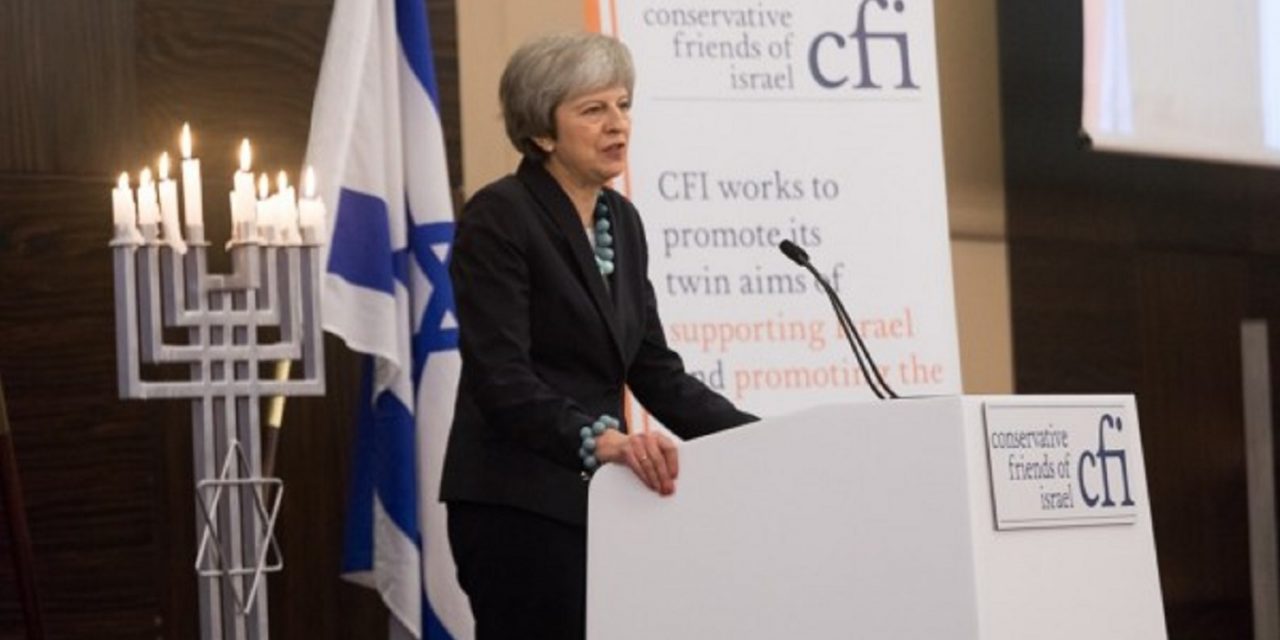 Prime Minister Theresa May strongly condemned rising antisemitism in Europe, in a speech to the Conservative Friends of Israel group on Monday, saying that it was a critical component of fighting all racial hatred.

Speaking at the group’s annual lunch, Theresa May said that UK-Israel ties are “stronger than ever”, underlining that the Government “will stand by Israel when it is treated unfairly”

The speech to an audience of 800 Conservative members, including 200 Conservative Parliamentarians and 17 Cabinet members, took place on Monday afternoon shortly before she addressed the House of Commons after unexpectedly cancelling a vote on the Brexit deal.

The Prime Minister celebrated the “shared values” that the UK-Israel friendship is built on, hailed the UK-Israel economic and security partnership, and condemned antisemitism under the guise of anti-Israel hatred.

Mrs May heralded UK-Israel ties, stating: “We are proud of our pioneering role in the creation of the State of Israel. And today, our relationship is stronger than ever”.

Condemning antisemitism under the guise of anti-Israel hatred, Prime Minister May emphasised: “Criticising the actions of a particular Israeli government is never – and can never be – an excuse for questioning Israel’s right to exist”.

Ahead of Christmas, she also pointed out that while Christian communities in the Middle East have been decimated by persecution and violent attacks in the wars that have beset Iraq and Syria, the Christian community in Israel “continues to thrive and grow.”

Her speech in brief (via Conservative Friends of Israel):

Prime Minister May said: “The friendship that exists today between the United Kingdom and Israel has deep roots. Last year we marked the centenary of the Balfour Declaration. I will always remember standing with Benjamin Netanyahu to view the original version of that historic letter – surely one of the most significant in human history. We are proud of our pioneering role in the creation of the State of Israel. And today, our relationship is stronger than ever”.

Hailing record trade ties between the two states, the Prime Minister said: “We are Israel’s second largest trading partner and its number one destination for investment in Europe. Our bilateral trade is worth over $9 billion and rising”.

The Prime Minister said: “As we prepare to begin a new chapter in our own national story, outside the European Union, and re-engage on the world stage as a global champion of free trade we will look to friends like Israel to broaden and deepen our links. Indeed as you heard earlier, Liam Fox was in Israel a couple of weeks ago, carrying exactly that message”.

Prime Minister May voiced unwavering support for Israel’s right to self-defence: “The United Kingdom knows all too well the devastating human cost of terrorist violence – it is a lesson we have learned over many years. Like all civilised nations, we remember the victims of terrorism and we stand absolutely against any attempt to achieve political goals by way of murder and bloodshed. It never is, and never was, justified. So we will always support Israel’s right to defend itself, today and in the future”.

The Prime Minister underlined her staunch opposition to boycotts and the singling out of Israel: “We will stand by Israel when it is treated unfairly at the United Nations and have no truck with boycotts, divestment or sanctions that are simply unacceptable”.

Prime Minister May asserted: “Our connections with Israeli civil society are the strongest of the ties that bind our two countries together and CFI plays an important part in strengthening and sustaining that friendship. For that, and for everything you do, on behalf of the Conservative Party, I thank you”.

She said: “Events like this and the work of groups like CFI remind us that there is so much more that unites the Conservative Party family than divides it”.

Prime Minister May said that CFI and the Annual Business Lunch is “devoted to celebrating one of the most important things in life, and one of the things that makes it most worth living and that’s friendship. The friendship between two great democracies – the United Kingdom and Israel. The friendships that we have formed in the Conservative Party, as we come together to promote the values that unite us. And the friendships that have been built between UK Conservatives and our colleagues in Israel through the events and visits that CFI organise every year”.

Strongly condemning those who use anti-Israel hatred as a cover for antisemitism, Prime Minister May said: “Criticising the actions of a particular Israeli government is never – and can never be – an excuse for questioning Israel’s right to exist. And it can never be – an excuse for hatred against the Jewish people. There are no excuses for any kind of hatred towards the Jewish people. I stand in absolute solidarity with our Jewish community against this poisonous force”.

She added: “We must root out the scourge of antisemitism here in our own country – just as we stand with every community in Britain to fight racial and religious hatred in any form. You cannot claim to be tackling racism, if you are not tackling antisemitism. And that starts with being absolutely clear about what antisemitism is”.

Prime Minister May condemned the Labour Party for not adopting the International Holocaust Remembrance Alliance (IHRA) definition of antisemitism in full and deplored the growth of antisemitism in the party: “As was mentioned earlier, ours was the first government in the world to adopt the definition of the International Holocaust Remembrance Alliance. This definition means that no-one can ever plead ignorance or hide behind any kind of excuse. We did not try to re-write, edit it, hedge it. We accepted it in full. And as we know Labour, did not. And the fact that the Labour Party under Jeremy Corbyn has allowed antisemitism to grow unchecked is a stain on the reputation of a once great party. Shamefully, it has contributed to a growing sense amongst Jewish people that they are under threat. That is a tragedy for our country and something that everyone in this room will stand against”.

The Prime Minister thanked CFI Parliamentary Chairman (Lords) Rt. Hon. Lord Pickles for his leadership in championing the creation of a National Holocaust Memorial by Parliament: “The United Kingdom will soon have a permanent reminder of the horror to which antisemitism can lead. The National Holocaust Memorial will stand next to Parliament in Victoria Tower Gardens. It will have an education centre to lead the national effort to fight hatred and prejudice in all its forms. And I am especially grateful once again to my friend Lord Pickles for his leadership on this cross-party project – and for everything he does to champion the Jewish community in this country”.

Prime Minister on the Duke of Cambridge’s visit to Israel:

Mrs May said the Duke of Cambridge’s historic visit to Israel in June this year was a celebration of the friendship between the two countries: “The UK-Israel friendship is built on shared values. And those were celebrated earlier this year with the wonderful visit of His Royal Highness the Duke of Cambridge to Israel – the first official royal visit to the State of Israel. The Duke met young people from Israeli civil society, including LGBT leaders, those working on mental health issues and those helping the less fortunate in society”.

Prime Minister on the two-state solution:

Affirming her commitment to an “enduring peace” between Israelis and Palestinians, Prime Minister underlined that there “must be a peace based on a two-state solution with a safe and secure Israel alongside a viable and sovereign Palestinian state”.

She added: “It will take courage and vision from each side if we are to have a realistic chance of achieving this goal. And that includes an end to the building of new settlements and an end to Palestinian incitement too”.