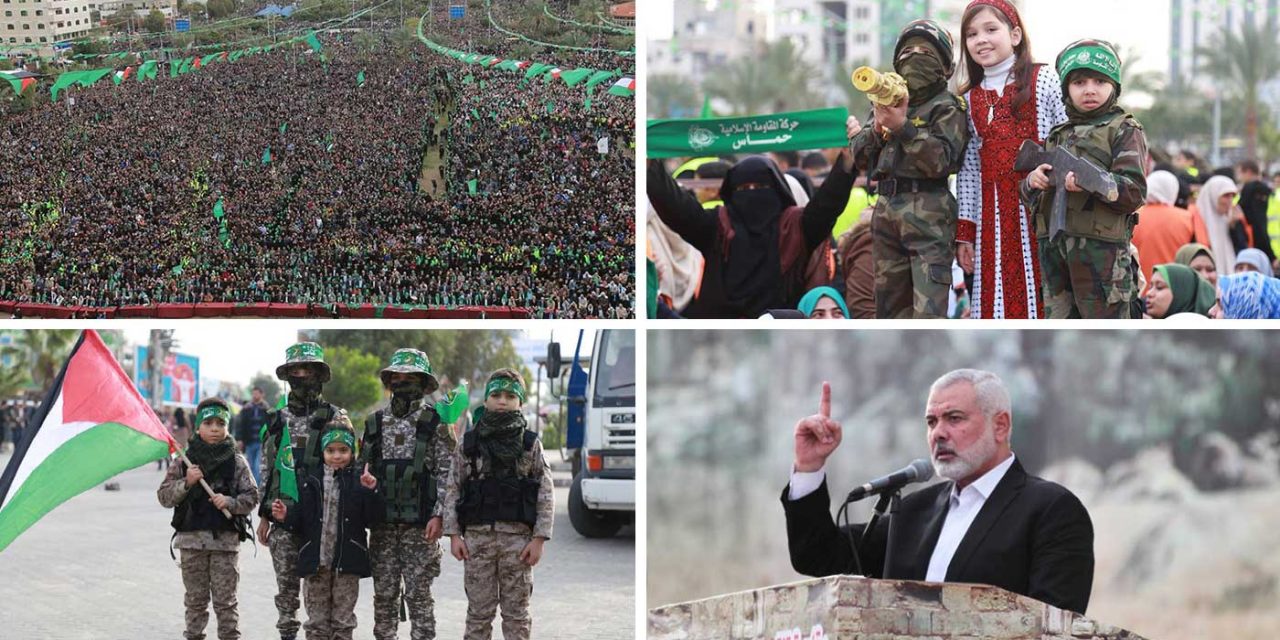 On Sunday, tens-of-thousands of Palestinians took part in a massive rally to celebrate 31 years of the terrorist organisation Hamas.

The rally, organised by Hamas, was attended by men, women and children from all over the Gaza Strip, many of whom were brought in by buses from the surrounded towns and villages. There was a sea of green flags being waved in the streets as celebrations took place throughout Gaza City.

In attendance were all the leaders of Hamas, including the head of their political arm Ismail Haniyeh and current head of the terror group Yahya Sinwar. In addition to Hamas, leaders from other Palestinian terrorist factions also attended the event, including leaders of Palestinian Islamic Jihad (PIJ) and the Popular Front for the Liberation of Palestine (PFLP). A delegation representing Palestinian President Mahmoud Abbas’s Fatah Party was also in attendance.

The indoctrination of children was in full swing as family’s celebrated together. In Gaza, terrorists are seen as the heroes of their society and children expressed their joy to be able to dress up as their heroes and pretend to be “Freedom Fighters” for Hamas. They are completely unaware that their ambitions are neither noble or pure. They are being taught to hate.

As expected, the speeches from the main stage were full of anti-Israel rhetoric with numerous calls for Israel’s destruction. The final speech was by the head of Hamas’s political arm, Ismail Haniyeh, who slammed Israel, the United States and “those who are cooperating with them.”

“These huge and blessed crowds are a right and direct response to those who besieged us and fought us. Freeing you is our responsibility, and breaking the handcuffs surrounding your hands is on the top of our priorities and we will get you out of jail,” Haniyeh told the crowds.

He announced that Hamas rejects the expected peace plan that the United States is preparing for the Middle East.

“Our people strongly said no for the deal. It won’t pass even if this head is removed from this body,” Haniyeh vowed.

Haniyeh also boasted of other “victories” in the previous year including the success of the Great Return March. He also boasted that Hamas was able to defend the Palestinian people against Israel during the recent conflict where Hamas terrorists launched more than 180 rockets at Israel’s civilian population. When Israel and Hamas agreed on a ceasefire, this was seen by many in Gaza as a Hamas victory. The resignation of Israel’s Defense Minister Avigdor Lieberman is seen as another victory.

Finally, Haniyeh mocked Israel and the US for failing at the United Nations when the nations of the UN voted earlier this month NOT to condemn the terrorists of Hamas. Hamas views this as a weakening of Israel on the global stage. However, the reality is the anti-Semitic UN has never seen Israel in a positive light and have condemned Israel more than any other single country. This is the same body that has never once condemned the terrorists of Hamas.

In response to Hamas’s celebrations, Israel wished Hamas a “Happy Birthday” in its own way, exposing the reality of Hamas; a terrorist organisation that is destroying its own people to further its murderous aims.

#Hamas is celebrating its 31st birthday so we made them a little gift… pic.twitter.com/ZUsnU9YSxX