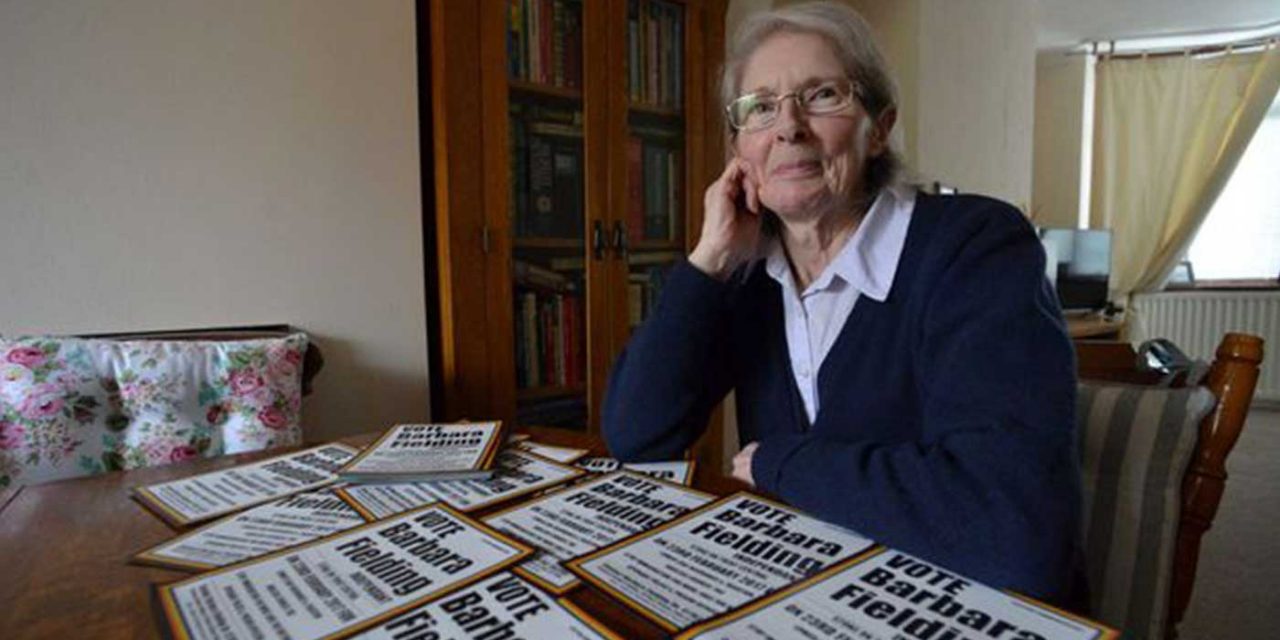 A 79-year-old Staffordshire election candidate has been jailed for 12 months for stirring up racial hatred when she called for “new and better death camps” for Jews.

Barbara Fielding-Morris, of Draycott, Staffordshire, stood as an independent candidate in Stoke-on-Trent central during last year’s by-election and general election.

She has praised Adolf Hitler and likened Jews and immigrants to termites. She called for “new and better death camps” and her blog, which has now been taken down, was filled with anti-Semitic and racist content as seen in the screenshot tweets below.

I expect @Far_Right_Watch already knows but I doubt she has much support anyway? pic.twitter.com/C5X2QjyRYd

One of her manifestos, which was uploaded to Reddit, shows a whole list of policies she was campaigning for, including the abolition of the Magna Carta, an end to sick pay and maternity leave, the banning of nuclear power and disabled car parking spaces to be “banished”.

Her more racist policies included the deportation of all “asylum seekers and immigrants” including all their “ancestors and descendants”. And she said, “Every Nation on this planet needs Ethnic Cleansing as the terrible Israeli Karl Marx, Winston Churchill, Sigmund Freud, Abu Hamza etc., proves.”

She also had some conspiracy theories about low-frequency radio signals controlling voters to rig the election.

Regarding the trial the Metro reported:

Passing sentence at Stafford Crown Court, Recorder Julian Taylor said Fielding-Morriss, who represented herself in court, had “not helped her cause” by offering antisemitic mitigation.

The pensioner, who accused the judge of curtailing her freedom of speech, submitted three written statements to the court and in the witness box claimed she was protecting “my white nation” from “annihilation” by immigrants.

After saying she believed an “infestation” of Jews had invaded Britain, Fielding-Morriss returned to the dock and was told she would serve six months of her one-year prison term in custody, and the remainder on licence.

Recorder Taylor told Fielding-Morriss: “The background to this case is that you stood as a parliamentary candidate.

“Your manifesto, which was published on a website and in a blog, contained material that formed the subject of the three counts on the indictment.

“What I found particularly sinister during the trial was your attitude. You showed no remorse whatsoever.

“Indeed even today, when I gave you a final opportunity to address me, you started to repeat some of the matters you put forward to the jury during your trial.”

The judge added: “The fact of the matter is you intended to stir up racial hatred.

“The fact you were standing in a general election as a parliamentary candidate aggravates this case, because you were putting views forward to an electorate.”

The judge said the defendant’s age was not of itself a barrier to imprisonment, adding: “This matter is so serious that it crosses the custody threshold – an immediate sentence of custody is appropriate.”