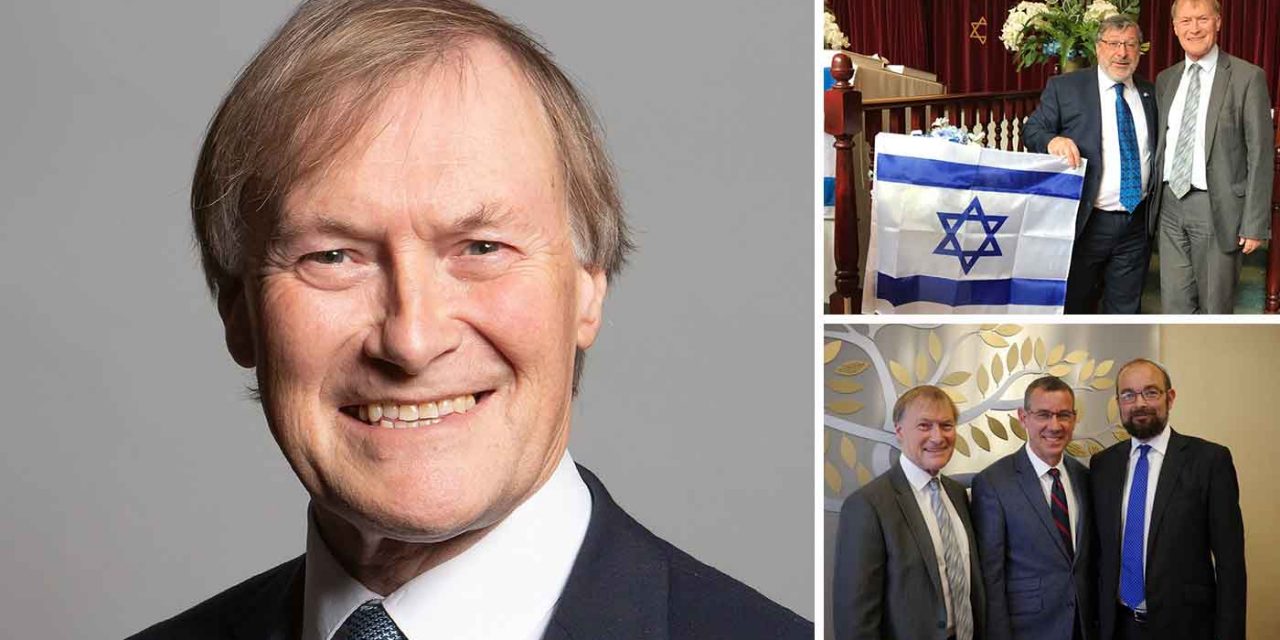 Sir David Amess MP tragically lost his life in October when he was murdered in a terror stabbing while meeting with his constituents at a church in Leigh-on-Sea. Sir David Amess was a true friend of Israel and the Jewish people, an advocate of Holocaust education and an outspoken critic of the Iranian regime. We especially want to pay tribute to these areas of his work that are less likely to be covered by the media.

Prime Minister Boris Johnson described Sir David as “one of the kindest, nicest, most gentle people in politics.” And while he was known for his gentle character, he was not soft in his convictions.

Sir David was an active member of the All Party Parliamentary Group Against Antisemitism. Speaking against anti-Semitism in Parliament earlier this year, he said, “Although I myself am not a Jew but a Catholic… I would certainly have been proud to have been born a Jew.”

“I simply do not understand and have never understood antisemitism. The most important lesson from the Holocaust is that although we cannot police the world, it is simply not acceptable to stand by and do and say nothing when genocide happens. For evil to prevail, all it needs is for good people to remain silent.”

Sir David did not remain silent. He also ensured the voices of the past would carry through to future generations.

Sir David Amess spent years campaigning for a statue of Raoul Wallenberg to be placed outside Marble Arch synagogue. Raoul Wallenberg was a Swedish diplomat who helped transport Jews by issuing the Schutz-Pass (protective passport), and is estimated to have saved the lives of 100,000 Jews in Hungary.

He described it as “one of the proudest moments of my life” when the Queen, the Duke of Edinburgh and Israel’s President Ezer Weizman unveiled the statue in his constituency.

It was all part of his advocacy for Holocaust education, to ensure the voices of persecuted Jews would not be silenced. Every year, the Jewish community in Southend commemorated those who lost their lives in the Holocaust by planting trees. Sir David was proudly “very much involved” in this tree planting each year.

His stand with the Jewish people extended to Israel. Sir David was a leading member of Conservative Friends of Israel, previously serving as the honorary secretary, and he regularly met with Israel’s Ambassadors to the UK. Over the years he made several visits to the Jewish state and counted it a “great honour” to travel to Jerusalem and lay a wreath and plant a tree at Yad Vashem (Israel’s national Holocaust Museum).

Sir David also signed “The Pledge for Israel” through which CUFI and other groups invited candidates to sign before the 2017 general election. The pledgers agreed to defend Israel’s right to exist, reject boycotts of Israel and support the IHRA definition on anti-Semitism in parliament and more.

Sir David was also an advocate for freeing Iran from the grips of tyranny. He chaired the British Committee on Iran Freedom, regularly spoke out against the Iranian regime’s human rights violations and their funding of terror groups such as Hamas and Hezbollah, and said Iran’s threats of “wiping the state of Israel out of existence is absolutely disgraceful.”

In 2018, Sir David led a UK delegation of parliamentarians to a Free Iran conference in Paris. Shamefully, the event was targeted by Iran, with Belgian police intercepting 550g of explosives, the same kind used in the Manchester Arena Bombing, which were transported by an Iranian diplomat. French officials later said the diplomat was running an Iranian state intelligence network and was acting on orders from Tehran.

Undeterred, Sir David continued his work against the regime. In fact, a few days before his murder, Sir David wrote an article on Iran and called for Iran’s President, Ibrahim Raisi, to be brought to justice for his part in the crime of sentencing 30,000 Iranians to death for opposing the regime.

In July 2021, speaking via video link to the event, he proudly displayed two books showing over 100 signatures from current MPs and members of the House of Lords that he had helped to personally gather. Sir David said proudly that the statement they signed “rejects the brutal religious dictatorship in Iran and supports the Iranian resistance.”

Sir David was a true champion for freedom in Iran, once saying, “One of the proudest things I have ever done in my political career is to support the National Council of Resistance of Iran which calls for the Iranian regime to be replaced with a safer and more democratic government.”

Following his death, there has been an outpouring of love for Sir David Amess. The Holocaust Educational Trust said Sir David was a “long time supporter… joining us at every gathering and encouraging us in everything we did.”

The Board of Deputies of British Jews and Jewish Leadership Council both echoed the same sentiment, that Sir David had a “very strong and warm relationship with his local Jewish community.”

Rabbi Geoffrey Hyman of Southend Synagogue described Sir David as “a real mensch” (person of integrity) who was “always supportive and sympathetic to our members and causes.”

The National Council of Resistance of Iran held a vigil for Sir David, calling him a “champion of freedom” who “fought for democracy and human rights.”

Justin Welby, said Sir David was a man “whose deep faith fuelled his sense of justice. We are richer for his life, and we are all the poorer for his untimely death.”

This article first appeared in our Torch magazine. To read more articles like this from all our issues of Torch, please click the image below.