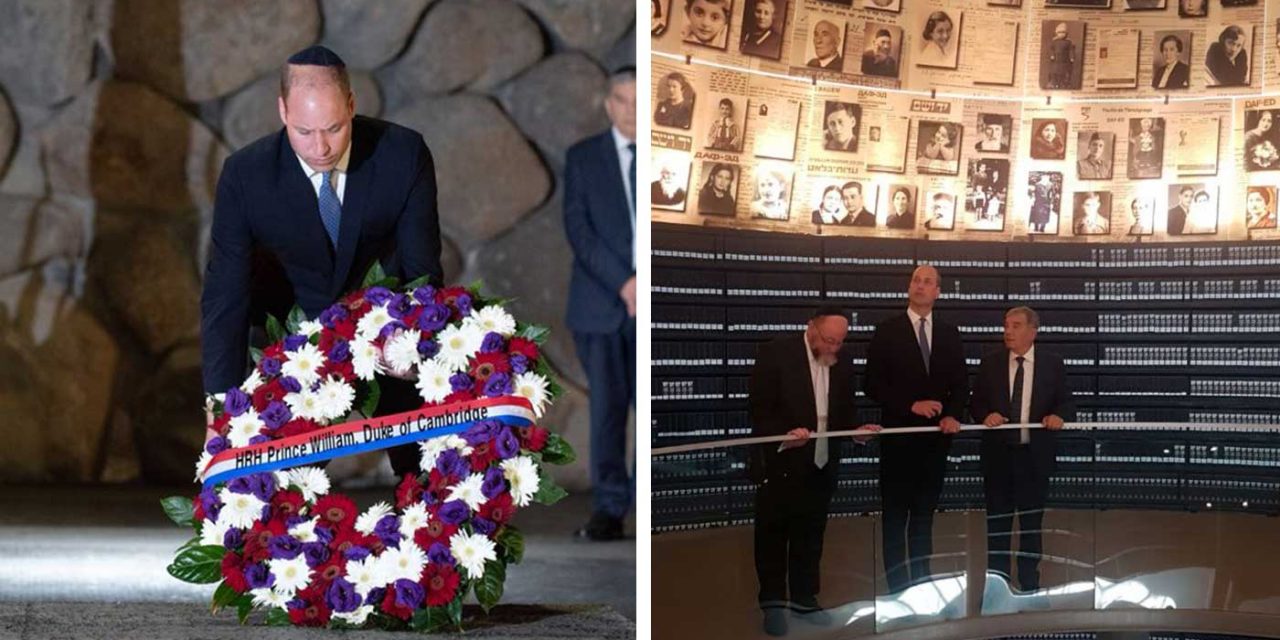 Prince William on Tuesday morning visited Yad Vashem Holocaust museum in Jerusalem where he honoured the victims of the Holocaust and remembered his great-grandmother who rescued Jews.

William was taken on a guided tour of Yad Vashem, the World Holocaust Remembrance Centre in Jerusalem, which recounts the history of the Holocaust, the extermination of six million Jewish people during the Second World War.

In the Hall of Names, described by the museum as a virtual cemetery for those whose resting place is unknown, the names and personal details of millions of victims have been recorded on Pages of Testimony, symbolic tombstones.

There is also an exhibition about the notorious Auschwitz concentration camp with artefacts collected to describe in detail how people were systematically murdered by the Nazis.

“Terrifying,” William said, viewing a display at the memorial’s museum of shoes taken by the Nazis from Jews at a death camp. “Trying to comprehend the scale… terrible.”

HRH, viewing piles of shoes from victims of Majdanek, says: ‘Its terrifying. To comprehend the scale and numbers is terrible’ pic.twitter.com/vVmaH4ZzdV

The Hall of Remembrance contains the “Eternal Flame”, a continuous fire that burns and illuminates the hall. Engraved on the mosaic floor are the names of 22 of the most infamous Nazi murder sites. This is to symbolize the hundreds of extermination and concentration camps, transit camps and killing sites that existed throughout Europe.

Prince William, wearing a Jewish scullcap (kippah), laid a wreath near the Eternal Flame to honour the six million Jews who were murdered in the Holocaust.

In the guestbook at Yad Vashem Prince William wrote:

It has been a profoundly moving experience to visit Yad Vashem today. It is almost impossible to comprehend this appalling event in history. Every name, photograph and memory recorded here is a tragic reminder of the loss suffered by the Jewish people. The story of the Holocaust is one of darkness and despair, questioning humanity itself.

The actions of those few, who took great risks to help others, are a reminder of the human capacity for love and hope. I am honoured that my own great grandmother is one of these Righteous Among the Nations.

We must never forget the Holocaust — the murder of 6 million men, women and children, simply because they were Jewish. We all have a responsibility to remember and to teach future generations about the horrors of the past so that they can never reoccur. May the millions of Jewish people remembered by Yad Vashem never be forgotten.

Duke’s message in @yadvashem book: I’m honoured my own great grandmother is Righteous Among Nations. We must never forget’#RoyalVistIsrael pic.twitter.com/aYH2QkWTgE

Prince William will meet two men who survived the Nazi genocide thanks to British intervention during his visit to Yad Vashem.

Henry Foner, 86, and Paul Alexander, 80, were among thousands of Jewish children taken in by Britain as part of the 1930s “Kindertransport” from a continental Europe that was falling to German conquest.

More from Henry Foner, 86, who met Prince William today at @yadvashem . He was sent to Wales on the Kindertransport by his father, Max, whose selfless act saved his only son. #RoyalvisitIsrael pic.twitter.com/24FklWMYh8

Foner told reported, “I’m really very grateful for Britain. It saved my life, it’s as simple as that.”

Alexander told Reuters, “When I put my foot on English soil for the first time, it was like I had been reborn, because I left Nazi Germany and was received by the British people and I have an enormous debt of the thanks to the British people.”

Robert Rozett, director of the Yad Vashem Libraries, told Hadashot TV news the prince showed great interest in the history museum and asked question such as why the Holocaust happened to the Jews.

On Thursday he will be visiting the Mount of Olives and the grave of his great-grandmother who rescued Jews during the war. To read more about Princess Alice, click here.