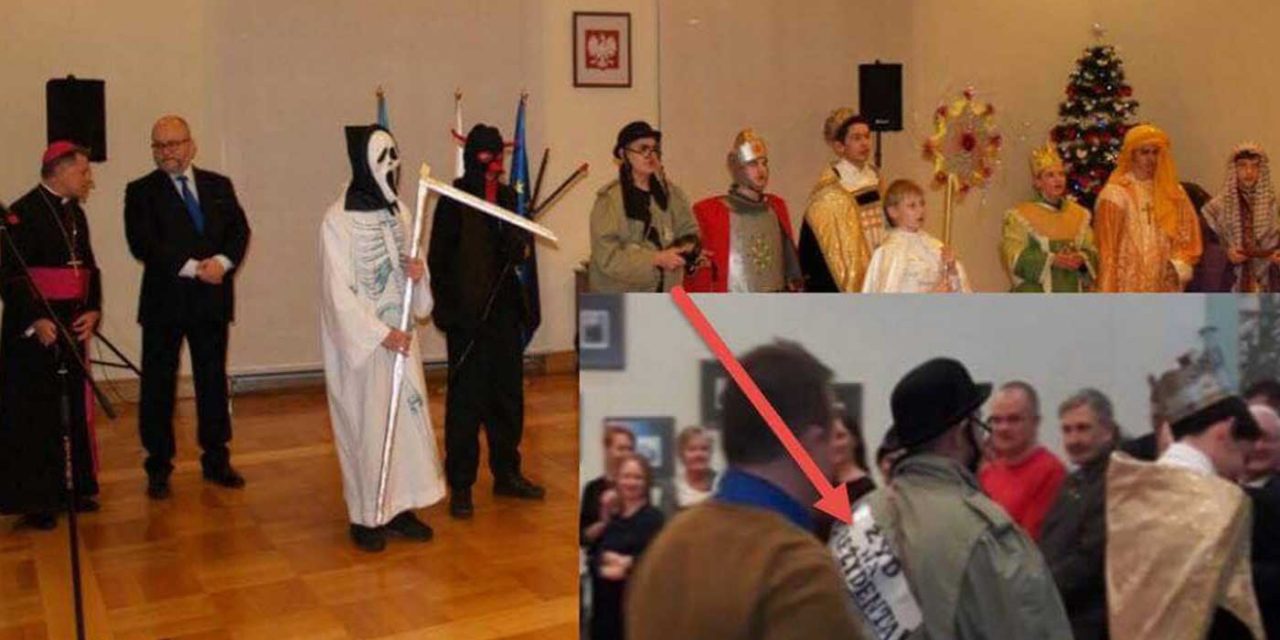 A nativity play which took place in the Polish consulate in Lviv, Ukraine has sparked controversy after including an anti-Semitic character within the performance.

We use the term nativity loosely as this play did little, it seems, to tell the story of Christ’s birth but instead used anti-Christian characters to belittle Christianity and an anti-Semitic character to spread hatred towards the Jewish people.

In the picture we can see some of the characters including the Grim Reaper, the Devil, a Jew and King Herod alongside the wise men, an angel and a shepherd.

We don’t know what the bishop pictured watching the play thought of the performance, or if this kind of adaptation is common in Poland, but it was clearly offensive to some in the audience. Of particular offence was the depiction of the Jewish character as one of the villains in the play, alongside the Devil and King Herod.

Oleg Vyshniakov, honorary consul of Israel in Ukraine, said, “It crosses all lines of common sense when in an official state institution people promote anti-Semitism, and children take part in this terrible event. What do these people teach the younger generation? Racism? Discrimination? Let’s see what happens next. ”

Vyshniakov wrote this in a post on Facebook which included a photo of the scene and said he would appeal to the Polish consul in Lviv, Rafał Wolski, with an official request for a formal apology.

It is not uncommon to see the Christmas story being satirised, and last year we reported how Greggs the popular UK bakers replaced Jesus with a sausage roll in one of their promotional posters.

However, while it seems that the Christmas story and the mockery of Jesus is fair game these days, it is particularly sad to see our Christian holiday and the story of the nativity being used to attack our Jewish friends.

As Christians United for Israel, we stand shoulder to shoulder with the Jewish people in combating anti-Semitism. We reject this shameful misuse of the celebration of Christ’s birth to push such a message of hate.