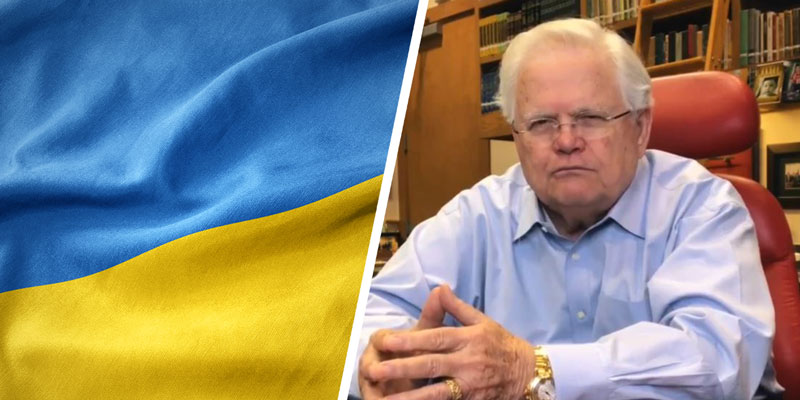 This week Pastor John Hagee, the founder of Christians United for Israel (CUFI) released a video explaining his perspective on the situation in Ukraine and how it relates to other events around the world.

Pastor Hagee makes clear that the West must stand up to Putin’s tyranny or it risks destabilising other regions and could endanger Israel as the enemies of the Jewish state are bolstered by the weakness of America and Europe.

Russia’s dream of recreating the USSR is becoming a reality. This may well be the day that historians look back, declaring that this was indeed the birth of World War III.

History is repeating itself. Putin is doing exactly what Hitler did to get World War II started. Hitler declared to European leaders his need to invade Poland. Europe failed to respond and the UK, under the leadership of its weak Prime Minister Nevil Chamberlain, bowed to Hitler’s demands. Shortly thereafter, World War II began where 50 million were killed and 6 million Jews were systematically slaughtered.

Concerning Hitler, Winston Churchill said words America should remember. Those words were, “You can’t negotiate with a lion with your head in its mouth.”

When Putin, the former KGB officer, the master of deception, looks at President Biden, he sees Neville Chamberlain – weakness personified. Russia and China are united in their efforts to destroy America. China is watching America’s leadership make loud proclamations with very little action.

While China is watching this parade of weakness, today, they once again sent their fighter planes into Taiwan’s airspace. China has Taiwan in its sights where 65% of all semiconductors are manufactured for automobiles and high-tech electronics. Should China overtake Taiwan they will then control automobile production in America and around the world.

Meanwhile, as Russia succeeds in having its way with Ukraine with no real pushback from America, Iran will take that as the green light to finalise its nuclear ambitions to achieve a bomb. Iran is under the control of radical Islam which has threatened to use a nuclear bomb to attack Israel and the United States. 9/11 proved that America can be attacked by radical Islamists with devastating effect. A nuclear weapon is far more deadly than an airplane loaded with fuel. The Iranian threat is real, and Iran must be stopped before these weapons become operational.

Russia’s military has been in the Middle East since 2015. Russia supports Iran. Iran trains, equips, and funds the terrorist armies of Hamas and Hezbollah who are begging for the green light to attack Israel with a nuclear weapon.

People of America, our nation is in a severe crisis. Now is the time to show our strength. Our leaders must take their rightful place at the head of the international table. They must start believing the threats of our enemies and stop ignoring the plight of our allies.