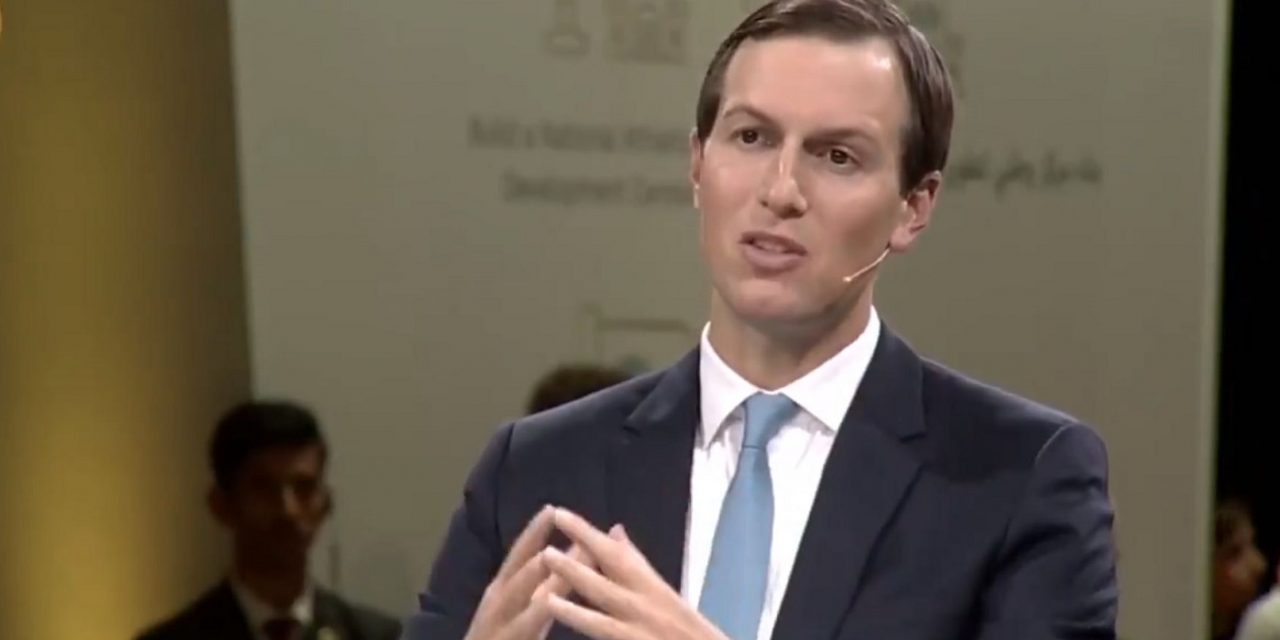 Jared Kushner, President  Trump’s senior adviser and son-in-law, led a two-day conference in Bahrain this week attended by Arab leaders during which he urged Palestinians to think outside the “traditional box” for an economic pathway he said was a precondition for peace.

Kushner presented a $50 billion economic revival plan that he describes as “opportunity of the century” for the Palestinians, promising to jumpstart the stagnant Palestinian economy.  Kushner argues that economic stability would create the conditions necessary for peace between Israel and the Palestinians.

Presenting to an audience of Gulf and Arab officials, the plan depends on donors and investors (not the US or Israel) to contribute to the package. The political component to the initiative is expected to be released until later this year.

The proposal — which aims in 10 years to create a million new jobs, slashing unemployment and improving living standards in the so-called West Bank, Gaza and across the Middle East — has been rejected by Palestinians because it does not include a framework for resolving their conflict with Israel.

Though the conference was rejected by the Palestinians, Kushner on Thursday hailed the peace workshop in Bahrain as a “tremendous success,” as he made another appeal for the Palestinians to consider Washington’s $50 billion economic stimulus plan.

Neither the Israeli nor Palestinian governments attended the event (the Palestinians boycotted the event), but Israeli Prime Minister Benjamin Netanyahu said Israel was open to the proposal.

Palestinian leadership, however, were critical of the proposal:

“The Manama workshop is quite disingenuous. It is totally divorced from reality. The elephant in the room is the [Israeli] occupation itself,” senior Palestine Liberation Organisation official Hanan Ashrawi told a news conference in Ramallah on Wednesday.

Ismail Haniyeh, the chief of Islamist group Hamas, criticised the plan as “attempted ruses and word-play at the expense of the historical and extant rights of the Palestinian people”.

But Saudi Arabia and the United Arab Emirates support the plan, while others — including Jordan and Egypt, the two Arab nations that have reached peace with Israel — sent deputy ministers.

The foreign minister of Bahrain, meanwhile, said the Kushner plan was an “opportunity not to be missed”.

“I think if we take this matter seriously it could be a very important game-changer,” Sheikh Khalid bin Ahmed al-Khalifa told Israeli public broadcaster Kan, in English.

Khalid bin Ahmed Al Khalifa, Bahrain’s foreign minister, went even further, saying “Israel is a country in the Middle East. It is part of the heritage of this region. The Jewish people have a place amongst us,” he said.

"Israel is a country in the Middle East. It is part of the heritage of this region. The Jewish people has a place amongst us. We should talk", Bahraini Foreign Minister @khalidalkhalifa tells me in an interview in Manama@newsisrael13 pic.twitter.com/gJh9EYNglE

Whilst some Arab leaders remain sceptical, the conference was a historic occasion and reflects a warming of relations between Israel and the Arab states.

Israel has no formal diplomatic relations with Saudi Arabia, Bahrain, and the UAE but in recent years the two sides have crept ever closer together, motivated partly by a shared opposition to Iran.

“The conference saw saw dozens of small encounters between Israelis and Gulf Arab leaders in a way that would have been unthinkable ten years ago.

“A former Israeli general shook hands with Arab ministers in a hotel hallway. Journalists were welcomed into Bahrain on their Israeli passports. A small Jewish prayer service was held in a little-used Manama synagogue.”

Listen to Jared Kushner lay out the US plan for economic viability for Palestine during the Peace to Prosperity Workshop in Bahrain: pic.twitter.com/em3woACe8a