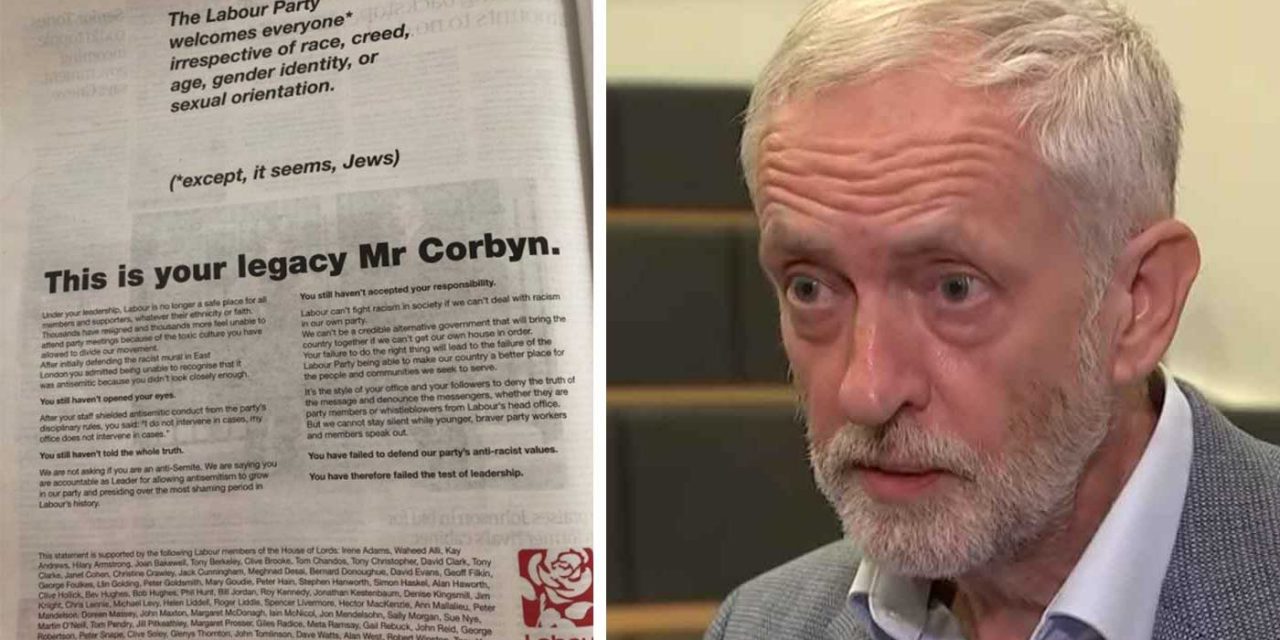 One-third of Labour’s peers have posted a full-page advert in The Guardian, blasting Jeremy Corbyn over anti-Semitism in the Labour party.

The 67 signatories say the Labour Party now welcomes everyone “except, it seems, Jews,” adding: “This is your legacy, Mr Corbyn.”

In a stinging and highly personal attack, they say Corbyn has “allowed a toxic culture to divide our movement,” adding: “You have failed to defend our Party’s anti-racist values. You have therefore failed the test of leadership.”

The vast majority of those signing the open letter were non-Jewish. As Lord Winston put it, “this is not some Jewish attempt to oust Corbyn” as some have accused.

They told Corbyn: “You are accountable as Leader for allowing antisemitism to grow in our party and presiding over the most shaming period in Labour’s history.”

They also accused the Labour leader of “shielding antisemitic conduct from the Party’s disciplinary rules,” adding: “It marks the latest fall-out from last week’s BBC Panorama documentary which showed former Labour staff members discussing their experience of dealing with complaints about antisemitism.”

The peers told Corbyn that “it is the style of your office and your followers to deny the truth of the message and shoot the messengers, whether they are party members or whistleblowers from Labour’s head office”.

They added: “We cannot stay silent while younger, braver party workers and members speak out.”

Last week, the BBC’s Panorama programme broadcast an hour-long documentary looking into anti-Semitism within the Labour party, as told by former staff members who were responsible for handling anti-Semitism cases.

In emails leaked to Panorama, Seumas Milne, one of Jeremy Corbyn’s closest aides, told officials the party was “muddling up political disputes with racism” and must review processes.

And General Secretary Jennie Formby attempted to interfere in who sat on a panel examining a high-profile case.

Labour said there was no interference and that former staff making the claims were “disaffected”.

However, all the staffers who spoke to Panorama all explained how they felt treated by the leadership was abusive. One had a nervous breakdown. Another said he was suicidal.

The party’s deputy leader Tom Watson said he was “shocked, chilled and appalled” by the allegations and the party had “serious questions” to answer. A statement he was attacked for by Corbyn’s allies, such as John McDonnell.

If you would like to watch the full Panorama documentary, you can do so on the BBC’s iPlayer service. Click here.

For those not wanting to watch the full hour-long documentary or who don’t have access to BBC’s iPlayer, please see a shortened version on YouTube.

Israel's minister of defense has said the cost of dealing with Iran is higher now than a year ago, but less than it will be in a year, adding that Iran is just a "few weeks" from being...
Read More
Share
Tweet
Email
More
582 Shares