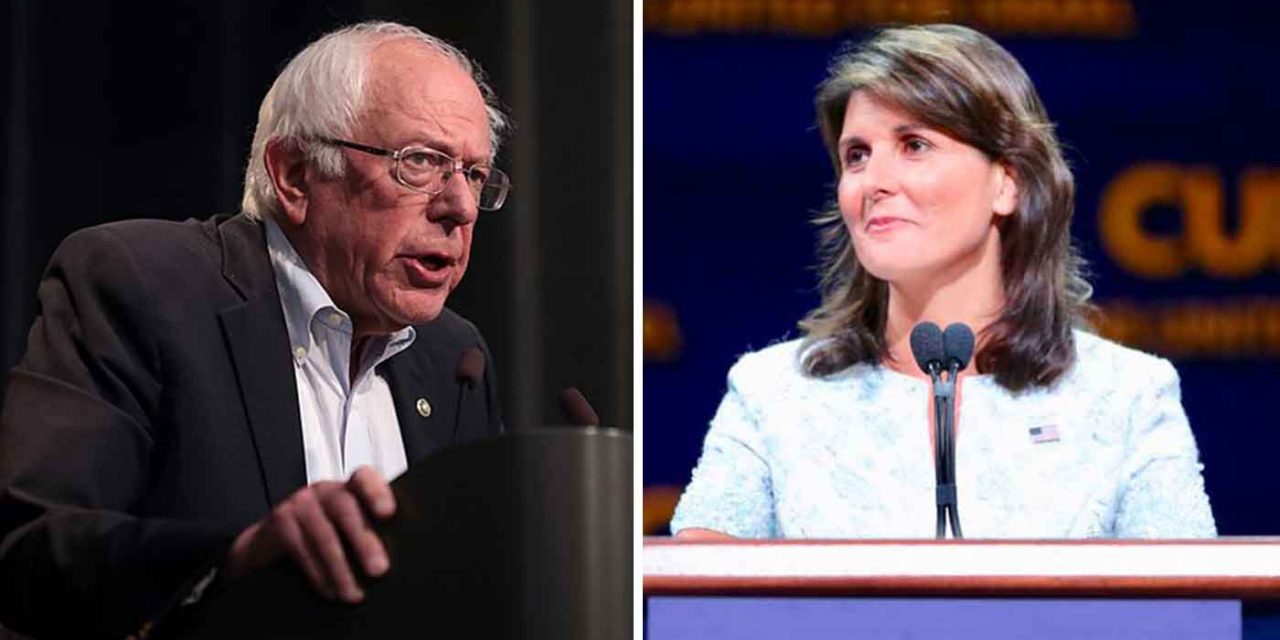 Former US Ambassador to the UN, Nikki Haley, has slammed Democratic presidential candidate Bernie Sanders for saying they should use defence funding the US sends to Israel and instead send it to Gaza, where it will likely be misused by the corrupt Hamas terrorist organisation.

Ambassador Haley said, “Just when you thought Bernie Sanders couldn’t get any more radical, he outdid himself. He wants to take money we give to Israel to defend itself from terrorists, and give it to Gaza, which is run by terrorists?? Unreal. Why isn’t every other Dem pres candidate saying he’s wrong?

Just when you thought Bernie Sanders couldn’t get any more radical, he outdid himself. He wants to take money we give to Israel to defend itself from terrorists, and give it to Gaza, which is run by terrorists?? Unreal. Why isn’t every other Dem pres candidate saying he’s wrong?

Sander, a far-left candidate for the Democrats, who is Jewish, has a long history of anti-Israel comments. Like all the other Democrat candidates, Sander refused to speak at the annual AIPAC pro-Israel conference.

Instead, Sanders spoke at the annual J Street conference, labelling Israel’s government under Prime Minister Netanyahu as being “racist”.

“It is not anti-Semitism to say that the Netanyahu government has been racist. That’s a fact,” Sanders said.

“My solution is, to Israel, if you want military aid you’re going to have to fundamentally change your relationship to the people of Gaza,” he said. “I would say that some of the $3.8 billion should go right now to humanitarian aid in Gaza.”

“My proposal in terms of Israeli-Palestinian efforts is not a radical proposal,” he went on. “All it says is that we need an even-hand proposal for both people. What is going on in Gaza right now, for example, is absolutely inhumane. It is unacceptable. It is unsustainable.”

Sanders is right. What is happening currently in Gaza is inhumane. Hamas is a terrorist organisation which brutally oppresses the Palestinian people. Hamas leaders and militants use funds given to Gaza for humanitarian purposes and instead fund their terrorist activities and make themselves wealthy. There are families of Hamas members living lives of luxury in Gaza, with villas and private swimming pools, whilst the general population in Gaza suffers.

Hamas keeps its people trapped with a radical ideology that teaches of destroying Israel. They brainwash Gaza’s children with their anti-Israel propaganda on television and on billboards, an anti-Semitic school curriculum and by training tens-of-thousands of children every year in “Summer Camps”, training them in hand to hand combat and military drills with the expressed aim of raising up a new generation of Palestinian “freedom fighters”.

This is not what Bernie Sanders is meaning when he talks about Gaza. Instead, Sanders blames Israel and Zionism, when the true blame is the anti-Semitic hatred of Hamas.

If Sanders’ plan unfolds, instead of the US supplying Israel with needed military funding to defend the only democracy in the Middle East and to press back against radical extremism in the region, Sanders will instead be funding the terrorist operations of Hamas which seeks to destroy Israel. That is why Nikki Haley is right to call this action “unreal”. And why we must pray for the US to remain a strong support of Israel.