Israeli archaeologists in Jerusalem have unearthed a 2,000-year-old council banqueting hall less than 100 feet from the Temple Mount.

“This is, without doubt, one of the most magnificent public buildings from the Second Temple period that has ever been uncovered outside the Temple Mount walls in Jerusalem,” said excavation director Dr. Shlomit Weksler-Bdolach in an IAA press release on Thursday.

“It is exciting to reveal such a magnificent structure from the Second Temple period while we mourn the destruction of Jerusalem and pray for its restoration,” said Mordechai Soli Eliav, Chairman of the Western Wall Heritage Foundation.

“These chambers are part of a new walk through the Western Wall Tunnels, where visitors will view fascinating finds and walk for the first time along the entire route among Second Temple-period remains that illustrate the complexity of Jewish life in Jerusalem between the Hasmonean and the Roman periods,” said Eliav.

“Fifteen years ago when I started guiding here, I was standing above us and saying, ‘you know underneath the arch, there’s something.’ So now we are inside that something,” Bisraor told CBN News. 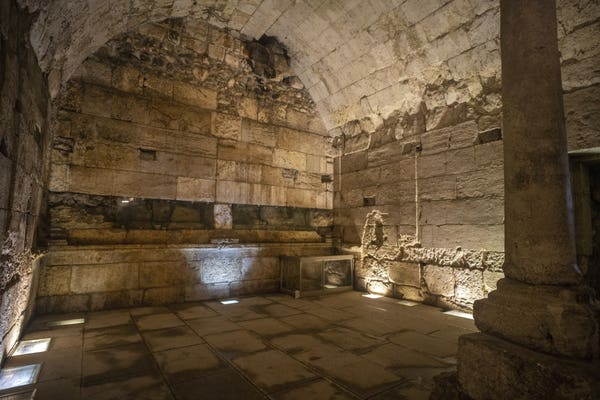 The Roman-era structure built circa 20 AD stood off a main drag leading to the Temple Mount and was used as a triclinium, or dining room, for notable members of society on their way to worship, according to the IAA release. Originally constructed with an ornate water fountain and decorative Corinthian capitals, the striking edifice underwent a series of structural changes in its 50 years of use prior to the 70 AD destruction of the Second Temple.

The massive structure will soon be open to the public as part of the Western Wall Tunnels Tour, which has been rejigged to create different paths and experiences, based on several new routes that cut through thousands of years of history, through today’s modern use of part of the tunnels as prayer and event halls.