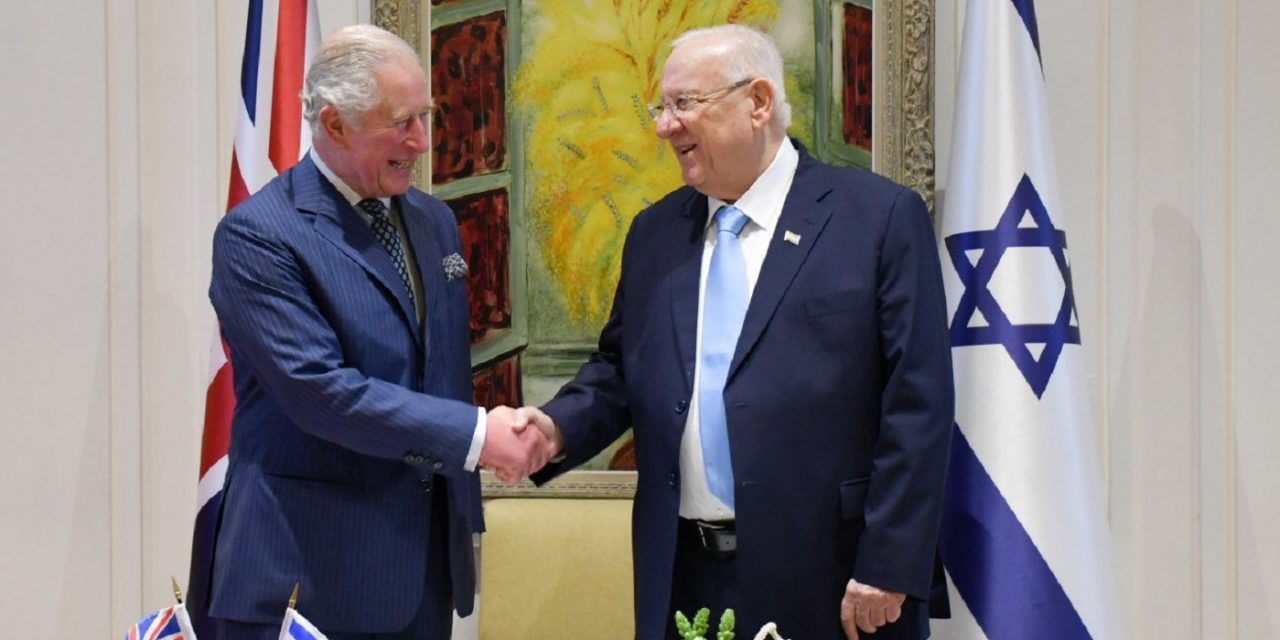 Prince Charles visited Jerusalem this week in his first ever ‘official’ visit to Israel. The heir to the British throne attended the 75th commemoration of the liberation of Auschwitz along with nearly 50 delegations of world leaders, including 41 heads of state. He also met President Rivlin, visited the Israel Museum and viewed Israeli innovation.

Whilst this is Charles’s first state visit, he has attended two funerals in Israel in the past. It follows Prince William’s highly successful visit in 2018.

Charles’s day on Thursday began with a meeting at Beit HaNasi, the presidential palace, to see President Reuven Rivlin where the future king planted a tree.  Reporters at the event say President Rivlin told Prince Charles that he still hoped Queen Elizabeth would be dropping by to visit Israel in the future, saying, “we’re still expecting your mother.”

Rivlin also said we’ll never forget how Britain fought the Nazis and how Princess Alice (Charles’ grandmother) saved Jews’ lives. Charles mentioned that many of his teachers were Holocaust survivors.

The Prince of Wales @ClarenceHouse landed in #Israel this morning and met with @PresidentRuvi in #Jerusalem. Together they took part in a symbolic act of planting a small tree.

Charles then visited the Israel Museum in Jerusalem, where he met with Holocaust survivors.

Marta Wise, who met Charles along with fellow Holocaust survivor George Shefit, said that she wanted Charles to know what really happened: “The horrors, the cruelty which was beyond human belief, and how I’m lucky to have escaped, with gratitude to heaven.”

“Today is an an extraordinary day. First of all, it is the 75th anniversary of the liberation of Auschwitz, and secondly there are so many world leaders here. For us to see Prince Charles here and so soon after Prince William came is very special. I have no clue why this room was chosen but the fact it was has enormous symbolism. Bayamim hahem bazman haze. Seeing survivors here and in the State of Israel, which is a miracle, is significant.

According to one report, Charles spent longer than expected at the Shrine of the Book, the wing of the Israel Museum where the Dead Sea Scrolls are kept and displayed on rotation. He was guided through the installation by Adolfo Roitman, head of the Dead Sea Scrolls unit. The Prince was visibly fascinated by what he was seeing.

The Prince of Wales tours the @israelmuseum, accompanied by museum curator Dr. Rachel Sarfati and the @chiefrabbi. pic.twitter.com/yPtlicMAXb

Prince Charles then joined around 40 world leaders and dignitaries, including President Putin, President Macron, King Felipe of Spain and Vice President Pence. Noticeably, Prince Charles made a point of greeting Holocaust survivors before everyone else, even the President of Israel who is hosting the event.

“The magnitude of the genocide that was visited upon the Jewish people defies comprehension and can make those who live in the shadow of those indescribable events feel hopelessly inadequate. The scale of the evil was so great, the impact so profound, that it threatens to obscure the countless individual, human stories of tragedy, loss and suffering of which it was comprised. That is why places like [Yad Vashem] and events like this are so vitally important.”

Prince Charles gave an impassioned speech, including Hebrew and quotes from the Bible in Jerusalem today.#Auschwitz #Holocaust #PrinceCharles #NeverAgain #WeRemember

Posted by Christians United for Israel – UK on Thursday, 23 January 2020

The Prince of Wales ended his speech with a reference to Scripture, saying,

“Knowing, as we do, the darkness to which such behaviour leads, we must be vigilant in discerning these ever-changing threats; we must be fearless in confronting falsehoods and resolute in resisting words and acts of violence. And we must never rest in seeking to create mutual understanding and respect. We must tend the earth of our societies so that the seeds of division cannot take root and grow. And we must never forget that every human being is be-tselem Elokim, “in the image of God,” and even a single human life is ke-olam malei, “like an entire universe.”

The Holocaust was an appalling Jewish tragedy, but it was also a universal human tragedy, and one which we compound if we do not heed its lessons. On this day, in this place, and in memory of the millions who perished in the Shoah, let us recommit ourselves to tolerance and respect; and to ensuring that those who lived through this darkness will forever, as in the words of the prophet Isaiah, be “a light unto the nations,” to guide the generations that follow.”

On Thursday evening, Prince Charles spoke at a reception at UK Ambassador to Israel Neil Wigan’s residence on Thursday.

After meeting the people behind technological projects, he said “it seems to me like Israeli genius is maintaining the entire structure of the NHS, along with a great deal of other technology,” and spoke of “riveting developments and ingenious inventions.”

Prince Charles was also presented with sustainability projects: HomeBiogas, a device to produce natural gas from home waste, and Watergen filtration system, which draw waters from humidity in the air.