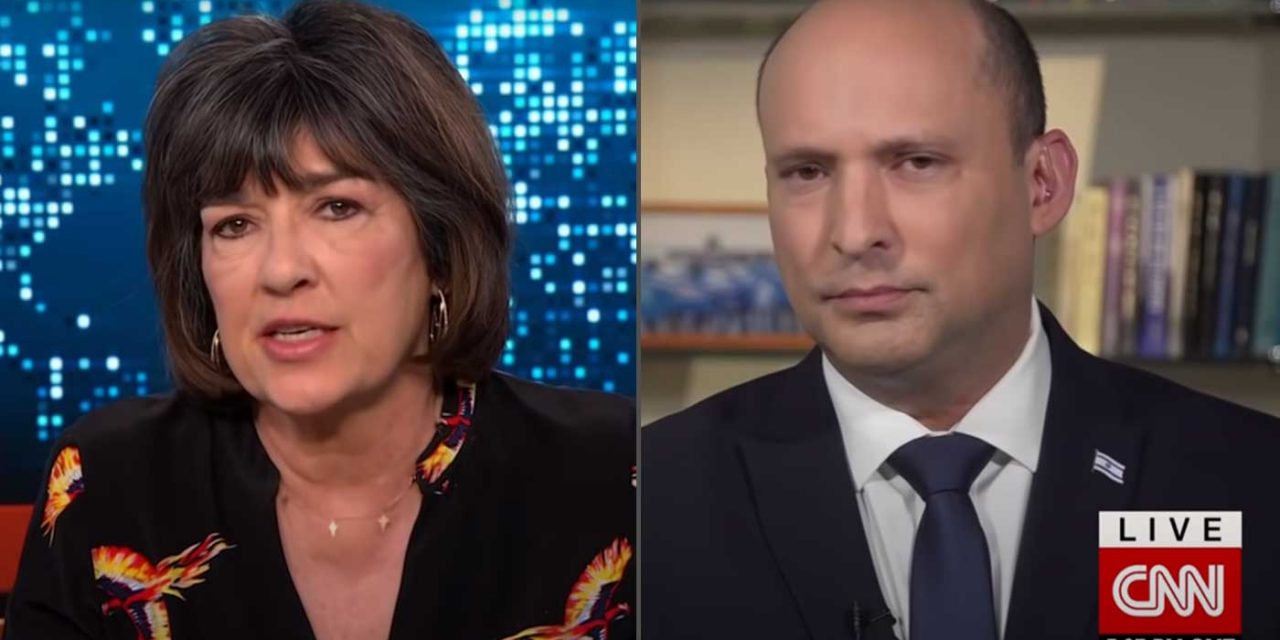 Israel’s Prime Minister Naftali Bennett gave a good interview with CNN this week where he counted the lies and distortions of the host in real-time and explained the truth on the ground.

It should be noted that the CNN anchor, Christiane Amanpour, is a long time anti-Israel advocate and is very hostile to Israel. It was very brave of Bennett to go onto the show and was important for him to challenge the anti-Israel narrative she espouses.

In the interview, Amanpour, who started the piece with a very negative explanation of the Israeli government, asked Bennett why Israeli police sometimes enter Al-Aqsa Mosque, which is located on the Temple Mount, citing the sensitivities of Palestinians and Muslims elsewhere.

“There you go again starting the story in the middle,” he responded.

Referring to clashes last Friday at the Temple Mount, the holiest place in Judaism, Bennett noted police entered the mosque only after rocks and fireworks were hurled from it toward officers and Jewish worshippers.

“My responsibility as prime minister of Israel is to provide freedom of prayer for everyone in Jerusalem, including Muslims, which is why I had to send in policemen to remove the rioters and it worked,” he said.

“When faced with violence you have to act tough,” he added.

Bennett also responded to over-exaggerated claims by Amanpour of “settler violence”, which is a minor problem compared to the deadly attacks by Palestinian terrorists against Israelis.

Bennett said that of the several hundred thousand Israelis living in West Bank settlements, “there are several hundred, perhaps even less who’ve applied violence from time to time.”

“But who’s getting murdered? We’re seeing Palestinians murder Israelis. We’re not seeing Israelis murdering Palestinians, and that’s why there’s no symmetry here,” he said. “I also object, these are not occupied territories, they’re territories in dispute, and we have claimed to our own place as well as them.”

“I get it. No one’s going anywhere. We have to figure out how to live together. That’s my job. To provide security for Israelis, dignity for Palestinians. I’m working on that very hard, and we’re succeeding,” Bennett continued.

“The problem is that the Palestinian leadership is totally corrupt, incompetent, so we have to do the job because there’s no one to work with on the other side, and… indeed, we’re adding jobs, better jobs, but at the end of the day, my utmost responsibility is to provide security to the Israeli people.”