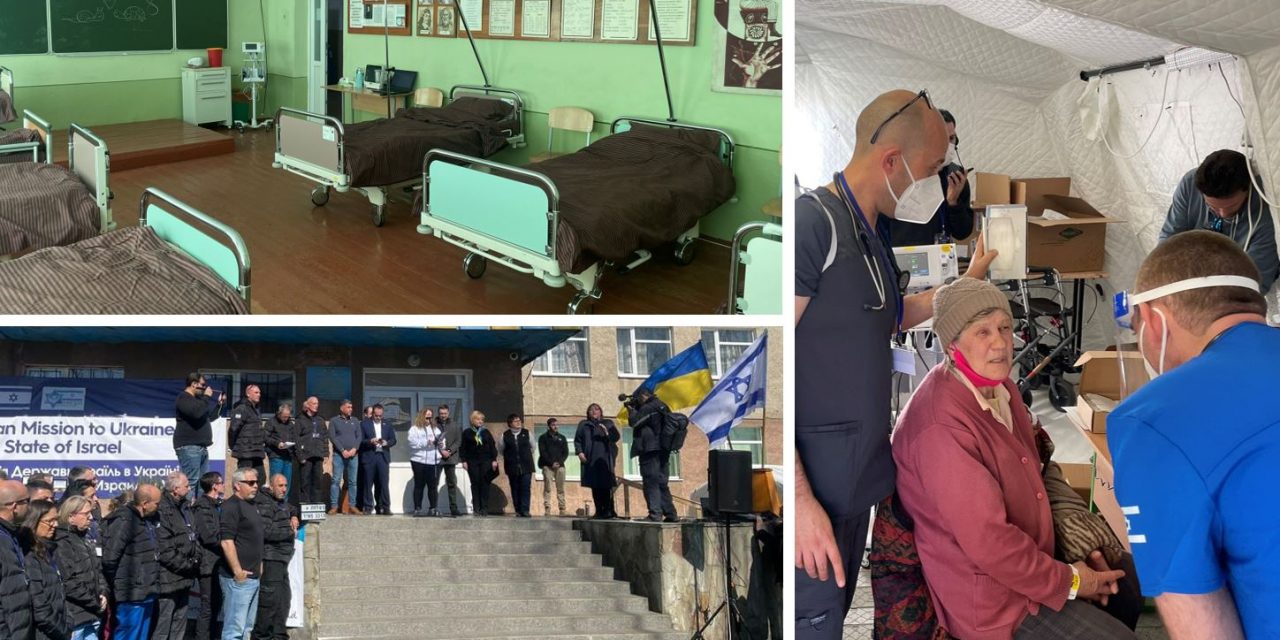 Israel has become the first country to open a field hospital within Ukraine.

On Tuesday, Israeli and Ukrainian anthems played as flags of the two nations were formally raised, officially opening the facility, which is situated at the site of an elementary school in the small town of Mostyska, an hour-and-a-half outside Lviv in western Ukraine.

Doctors and nurses from Israeli hospitals have now arrived at the facility after tons of equipment crossed the border at the weekend. It took just three days for initial teams to kit out the facility with classrooms converted to wards and medical tents erected in the courtyard. Beside chalkboards and educational posters lie heart rate monitors, incubators and reclinable hospital beds.

The Israeli mission’s 100 staff members – 80 of whom are doctors and nurses – will sleep on-site, in dorm-like conditions, improvised within the school building.

The hospital has been named “Kochav Meir” (“Shining Star”), after former Israeli prime minister Golda Meir, who was born in Ukraine and was the founder of the Foreign Ministry’s Agency for International Development Cooperation aid program, which is leading the field hospital project. The composer of Israel’s national anthem was also born in Ukraine, poignantly near Lviv, only a short distance from the hospital.

“We are certain that this ‘Shining Star’ will light the path during these difficult times in Ukraine,” says embassy charge d’affaires Yoav Bistritsky.

The field hospital will serve Ukrainian refugees and locals, and train local medical teams in telemedicine and field medical care. Israel will also be using its own satellite system so that it doesn’t have to rely on local communication networks.

“This team will bring to Ukraine the best knowledge, the most innovative opportunities that this country has ever seen,” said Yoav Bistritsky.

“We promise to keep supporting Ukraine in the coming future too, and we hope to see peace in this land,” Bistritsky said, before closing his remarks with a prayer for peace and an “amen” affirmation from the assembled crowd of delegation members, diplomats, Ukrainian government officials, and media.

#ShiningStar updates:
So far 268 refugees were treated, 5,779 lab tests conducted and 17 patients were hospitalized. So proud that #Israel is the first in the world to setup a field hospital in #Ukraine. Keep up the amazing work!❤️ #ProudofIsrael🇮🇱 pic.twitter.com/LD4nrAQNnL

Over the past few days, 17 tons of equipment and medical teams from Israel arrived at the site after crossing the Polish border on Saturday. While 10 outdoor tents were erected by Ukrainian teams and Israeli supervisors over the course of last week, crews had just three days to build out the hospital’s patient care, laboratory, pharmacy, and logistical support facilities.

The facility is a collaborative effort of the Health Ministry, the Foreign Ministry, and Sheba Medical Center, which is operating the hospital.

After the initial set up, core staff of doctors and nurses set off from Israel Monday morning in time for the opening.

The field hospital is expected to serve Ukrainian refugees and locals, and train local medical teams in telemedicine and field medical care, according to the head of Israel’s mission to Ukraine, Simona Halperin.

Israel began accepting patients at its humanitarian field hospital in Ukraine. The hospital is set to be open 24/7.

Israel is the first country that is establishing a field hospital within Ukraine. pic.twitter.com/cOdeKAWVjT

According to Yehuda Katzora, a Sheba administrator who is managing the hospital rollout, the facility’s medical staff — many of whom are Russian and Ukrainian speakers – come from across the Israeli medical system, from different hospitals and health funds, as well as from Magen David Adom. Staff are expected to do two-week rotations at the facility. Currently, the hospital plans to operate for a month, with an option to extend.

“It’s incredibly emotional to run the whole logistics side of things. It’s a very complicated operation, with coordination with several bodies, including UPS [who transported the medical equipment], El Al, the Foreign Ministry, the Health Ministry. It challenged everyone to give everything and raise a hospital that will be one of the best in the world, in terms of its capabilities, contents, and medical team.”

Within the first 48 hours of opening, 268 refugees were treated, 5,779 lab tests conducted and 17 patients were hospitalized.

Alexey Tsiboulski, a Sheba logistical manager who arranged the equipment and then flew to Poland last Thursday to await it, said preparing to operate inside Ukraine posed particular challenges.

“We had to make sure the equipment arrived intact. After all, it’s a warzone,” Tsiboulski said, adding: “And it did.”

The inauguration ceremony of the “Shining Star” field hospital in the city of Mostyska in western #Ukraine took place a short while ago. The ceremony was attended by representatives of the Ukrainian government, the Deputy Minister of Health… pic.twitter.com/XrMViaVeH1

Tsiboulski also shared that the weather — significantly colder than the Israeli climate — posed a significant logistical challenge. Mini stoves will heat each of the field hospital’s 10 tents.

Additionally, rather than rely on local communications networks, the hospital team has brought along two satellite dishes to control its own access to patient records and lab analysis.

Tsiboulski, who grew up in the former Soviet Union, said: “I’m really emotional. I walked into the school building [adjacent to the outdoor hospital] and it reminds me of one I studied in 40 years ago.”

“The tables, the chairs, imagining the students sitting in them,” he added. “To come here and help the Ukrainian nation, I didn’t even think twice when they asked, I wanted to come and give a hand.”