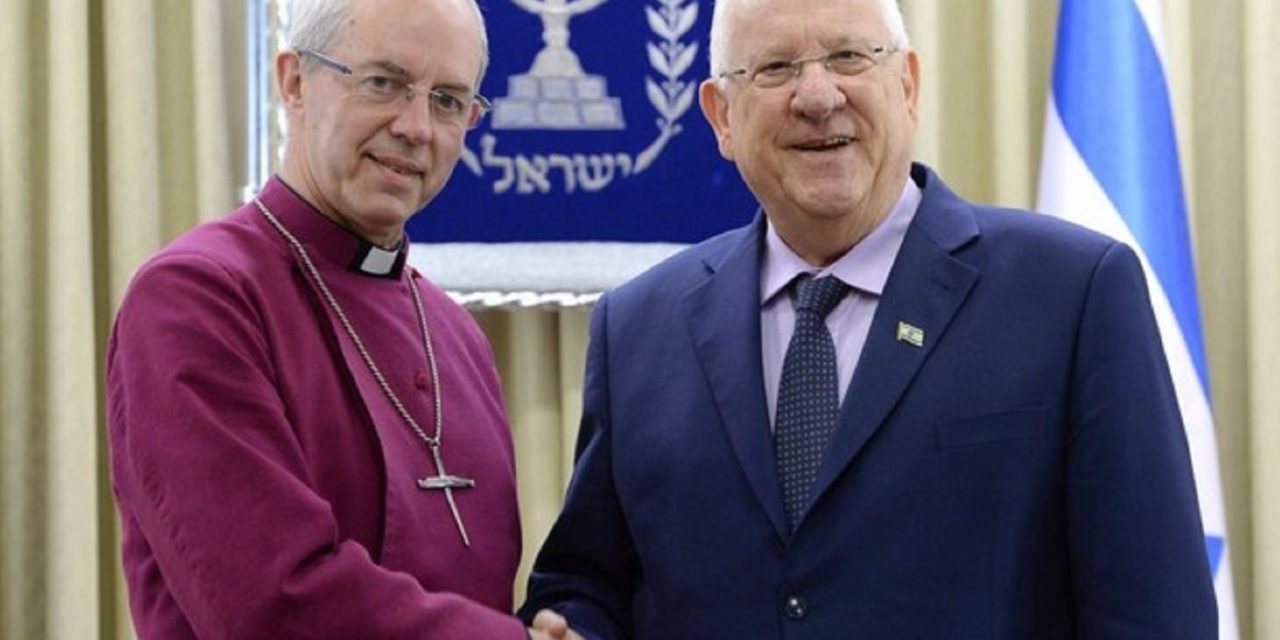 BICOM – The Archbishop of Canterbury met the President of Israel yesterday as part of his 12-day visit to the region.

The meeting between President Reuven Rivlin and The Most Reverend and Right Honourable Justin Welby was also attended by Anglican Archbishop of Jerusalem, The Most Reverend Suheil Dawani, and the UK Ambassador to Israel David Quarrey.

Speaking at the meeting, Rivlin outlined Israel’s commitment to religious freedom. “Israel is the only country in the Middle East where the Christian community is flourishing. And Israel is committed to the values of freedom of religion for all people of faith. This is our value and our duty as a Jewish-Democratic state,” he said.

He also stressed his belief that “faith should bring people together,” in reference to the ongoing conflict with the Palestinians. He said, “Anyone who cares for the well-being of the people of this land, must be a partner in this mission. We must not allow voices which teach hatred or call for boycotts, to divide the peoples. We must find ways to bring people together.”

Archbishop Welby agreed and stressed the importance of ending religious persecution in the region as a condition for peace. He said, “There cannot be peace without every person in the region – Israeli, Israeli Arab, Israeli Jewish, Palestinian – all of them being sure they can pursue their lives, pursue their aims without fearing the bomb or the bullet, without fearing persecution.”

The Archbishop also spoke about the centenary of the Balfour declaration, in which the British Government formalized its commitment to a Jewish homeland. He said, “until there is peace in the region, the Balfour Declaration has an element of unfinished business.”

In response, President Rivlin took the opportunity to reiterate his invitation to the British Royal Family to visit Israel. “We would be happy to welcome a member of the Royal Family here in Jerusalem, especially marking 100 years since the Balfour Declaration,” Rivlin said.

Archbishop Welby also met yesterday with the President of Israel’s Supreme Court Miriam Naor, along with Supreme Court Judge Salim Joubran, who is a member of the Christian community. The Archbishop praised Israel’s judicial system as showing “some of the immense strength and depth of this society, its culture and history”.

Today he is scheduled to visit the city of Hebron before meeting Palestinian leaders.