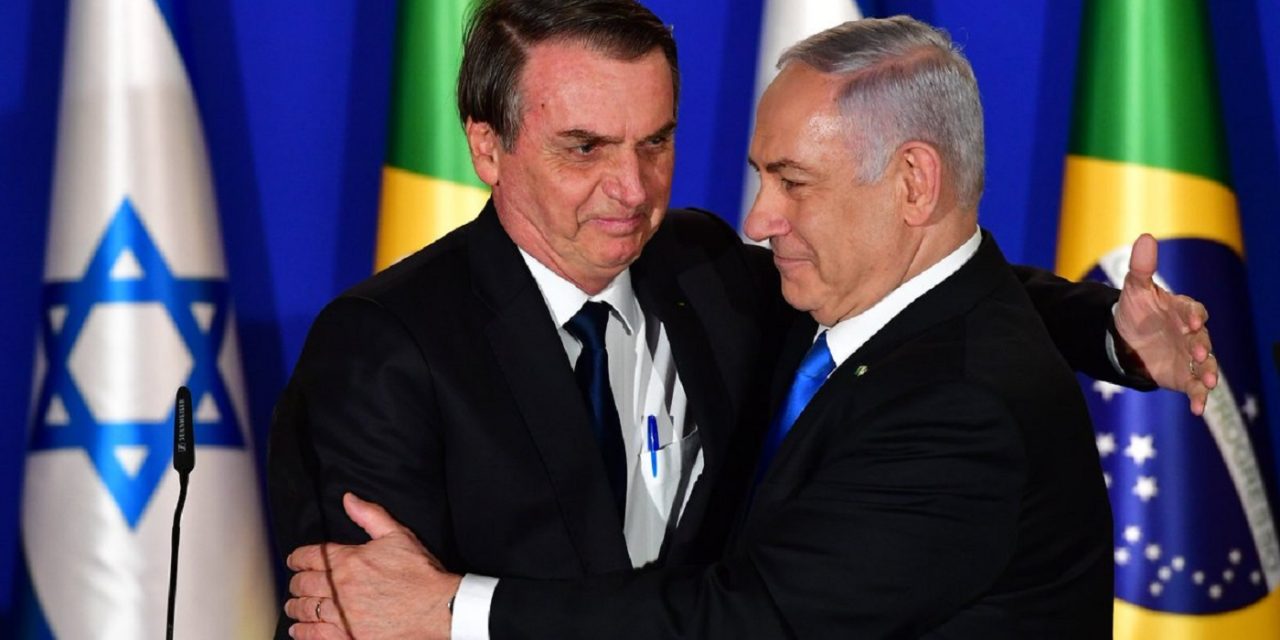 Brazilian President Jair Bolsonaro has completed a historic trip to Israel, in which he expressed his love for Israel.

“First of all, I’m Christian and I love Israel,” he told the press on Tuesday, “I really feel the atmosphere of cooperation between our countries is happening now and we can improve for the betterment of both of our people.”

On Monday, Bolsonaro made history as the first active head of state to visit the Western Wall with an Israeli prime minister. The Brazilian president announced the opening of a Brazilian trade office in Jerusalem, a first step towards the relocating of its embassy, which is in Tel Aviv. The Brazilian Foreign Ministry confirmed a trade office, not an embassy, would be opened, stating “Brazil decided to create an office in Jerusalem to promote trade, investment, technology and innovation as a part of its embassy in Israel.”

The two leaders then toured the Western Wall tunnels together, including the Wilson's Arch excavations and the Shaarei Teshuva synagogue. pic.twitter.com/rhZGkVtPIs

Dozens of agreements in trade within security, agriculture, tourism, aviation and science were also signed, as well as three Memorandums of Understandings.

President Bolsonaro has come under increasing pressure in recent weeks to go back on a promise he made at the start of the year to move Brazil’s embassy in Israel to Jerusalem. Whilst a complete embassy move to Israel’s capital hasn’t been ruled out, the opening of a “diplomatic office” reportedly stems from concern that the move would damage Brazil’s export of halal meat to the Arab world. Brazil is the largest exporter of halal certified foods – an industry that brought in $5 billion for the country in 2018.

The Palestinian leadership nonetheless condemned the move, saying they would recall their diplomatic representation in Brazil, while Netanyahu signaled he was still holding out for an eventual embassy move.

#Brazil's President @JairBolsonaro concluded a state visit to Israel, during which he announced the opening of a 🇧🇷 trade, technology & innovation mission in Israel's capital, #Jerusalem and signed important bilateral agreements, bringing Israel & Brazil closer than ever! 🇮🇱🤝🇧🇷 pic.twitter.com/i3HfFukjAP

Speaking to the press on Bolsonaro’s last day, Prime Minister Netanyahu praised strong bilateral ties and the deals and agreements signed over this week.

He stated, “Brazil has tremendous gifts and tremendous possibilities to join us. We can be, and want to be, your perfect partners. We have no limitation on what we share with you, whether it’s cybersecurity, in general security, in agriculture, in water, in IT. The sky is the limit, and we welcome you as our dearest friends.”

On a personal note, the prime minister stated, “We have a brotherhood. Our civilization began in this city thousands of years ago. Our common heritage began on these hills thousands of years ago. We cherish our past. We cherish our traditions. We are like an old tree with deep roots that keeps on sending branches to the sky. We have a wonderful opportunity to change the world and to change our future for the better.”

PM Netanyahu: “Brazil has tremendous gifts and tremendous possibilities to join us. We can be, and want to be, your perfect partners." pic.twitter.com/5Ni9adHFn3

Netanyahu struck a similar chord in remarks after touring an exhibit displaying various developments in the fields of agriculture and health with the Brazilian president.

“Brazil has tremendous gifts and tremendous possibilities to join us. We can be, and want to be, your perfect partners,” he said.

“We have no limitation on what we share with you, whether it’s cybersecurity, in general security, in agriculture, in water, in IT. The sky is the limit, and we welcome you as our dearest friends.”

On Sunday, Israeli and Brazilian representatives signed a host of bilateral agreements on Sunday in the fields of defense cooperation, public safety and technology among others, as well as an agreement that will see Brazil’s state-run oil giant Petrobas submit a tender to explore for oil and gas off the Israeli coast.

PM Netanyahu, at joint statements with Brazilian President @jairbolsonaro:
"I think that you represent great hope for a new start in Brazil. This is abundantly clear from your decision to be here, which is an amazing new start in Brazil-Israel relations."https://t.co/kpFop2oqYZ pic.twitter.com/Dm2DBQY4q0