How Britain has honoured victims of the Pittsburgh massacre 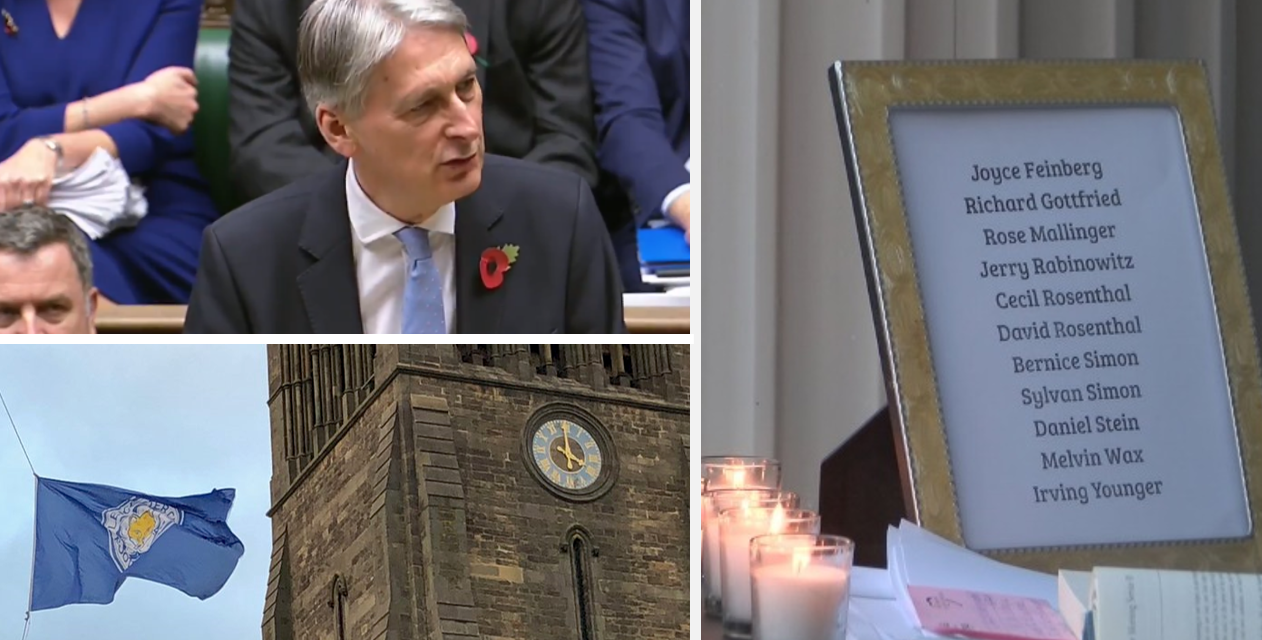 From politics to sport, there has been a moving response from the UK in condemnation of the Pittsburgh massacre and in honour of the 11 lives that were taken in the horrendous anti-Semitic attack.

We’ve highlighted some of the key tributes.

Theresa May said in a statement: “I’m deeply shocked by the reports of a shooting at a synagogue in the US today.

“Our thoughts are with the Jewish community in Pittsburgh and all those affected by this sickening and cowardly act.”

Meanwhile, Chancellor Philip Hammond used his Budget speech to pledge £1.7 million towards Holocaust education to mark 75 years since the liberation of Bergen-Belsen concentration camp, whilst making reference to Saturday’s anti-Semitic shooting in Pittsburgh. He said, “The battle against anti-Semitism did not end with the defeat of Nazi Germany”.

"The battle against anti-Semitism did not end with the defeat of Nazi Germany"In today's #budget, Philip Hammond pledged £1.7 million towards Holocaust education to mark 75 years since the liberation of Bergen-Belsen concentration camp, whilst making reference to Saturday's anti-Semitic shooting in Pittsburgh.

Posted by Christians United for Israel – UK on Monday, 29 October 2018

The Home Secretary gave assurances that the Pittsburgh attack has not changed the threat nature here in the UK, but said that official threat level on Israeli and Jewish targets in the UK remains set at “severe” – the same level as the wider threat to the UK from international terrorism.

Following the event, Sajid Javid tweeted, “Tonight I attended deeply moving Vigil for Pittsburgh to pay my respects to those caught up in the tragedy & stand united with our Jewish community. We will do everything possible to protect people from hatred”

Also at the London event, Chief Rabbi Ephraim Mirvis reminded the audience that “indifference” needed to be avoided at all costs. He called for Jews throughout the world to take part in their own synagogue services this weekend. “Let’s all go to shul next Shabbes”, he urged. “Nothing will keep us away”.

The Board of Deputies president, Marie van der Zyl, opened the evening with a sombre message to Pittsburgh Jews of “love and solidarity”, but reminded her audience that “what begins with the Jews never ends with the Jews”. Such an attack, she warned, was “an attack on all of us”.

📢As we mourn w/ the community of Pittsburgh, we are clear:

The Archbishop of Canterbury Justin Welby said: “We stand together in deep sorrow and prayer with Jewish people everywhere as they mourn the victims of the Pittsburgh attacks. Such hatred is found globally and historically and must be resisted globally and eternally.”

We stand together in deep sorrow and prayer with Jewish people everywhere as they mourn the victims of the Pittsburgh attacks. Such hatred is found globally and historically and must be resisted globally and eternally.

The Archbishop of York, Dr John Sentamu, responded to the attack by saying: “Lord of peace and justice show your power and mercy to all the worshipers at the synagogue in Pittsburgh who witnessed such brutal anti-Semitic murders!”

Chelsea Football Club received over 5,000 Likes on their Tweet offering thoughts and prayers for the victims and all those affected by the attack. The London-based club has made great effort over the past few months to speak out against anti-Semitism as part of a special campaign. In February, owner, Roman Abramovich, dedicated a match to victims of the Holocaust and invited a Holocaust survivor to share their story to the first-team players.

The thoughts and prayers of everyone at Chelsea FC are with the victims and all those people affected by the senseless attack on the synagogue in Pittsburgh this weekend.

NFL fans at London’s Wembley Stadium, held a moment of silence on Sunday for the victims of the Pittsburgh attack, as well as the Leicester City helicopter crash.

Leicester Cathedral currently have a prayer vigil in memory of those in the tragic Leicester City helicopter crash, in which owner Vichai Srivaddhanaprabha was among five people that were killed. Alongside the football team’s vigil, the cathedral has also thoughtfully placed a dedicated prayer vigil for the victims of the anti-Semitic attack in Pittsburgh for which visitors can place a candle.  The vigil explains the attack and names all the victims.

The @LCFC flag flies at half mast with the new stone work fox watching on. We are standing with all at #Leicester City in memory of those who lost their lives in the tragic accident on Saturday evening. The Cathedral is open for prayer and reflection. pic.twitter.com/mrr5RHyaEe

In Memory of the Pittsburgh Synagogue Victims

We express our heartfelt sympaphy to the families of those murdered in the shooting at the synagogue in #Pittsburgh. We pray also for those wounded and declare our stand in solidarity with the Jewish community in Pittsburgh and across the US. Whether in the US, UK, Israel or elsewhere, we stand united in the fight against the evil of #antisemitism.

Posted by Christians United for Israel – UK on Monday, 29 October 2018